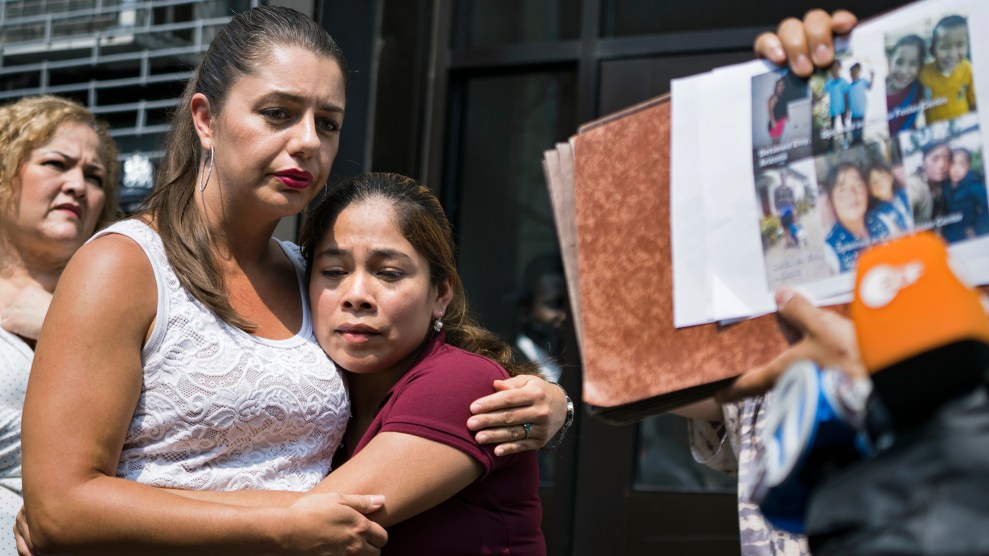 Yeni Gonzalez, a Guatemalan mother who was separated from her three children at the US-Mexico border, at a news conference in July in New York. Craig Ruttle/AP

The Trump administration confirmed on Monday that it will not meet the deadline set by a federal judge for reuniting parents with their young children.

Dana Sabraw, a federal judge in California, gave the administration until Tuesday to reunite children under five years old, and until July 26 to reunify older children. But only 56 out of about 85 children under five who are eligible for reunification will have been reunited with their parents by the Tuesday deadline. The numbers were revealed during a court hearing between the government and the American Civil Liberties Union, which secured Sabraw’s preliminary injunction requiring family reunification last month.

Sarah Fabian, a Justice Department lawyer, said that as of this weekend, there were 102 children under five who were still in government custody and separated from their parents. Fabian said two of those children have already been reunited, and another 54 will be reunited by Tuesday. Those children and their parents, Fabian said, will be released from custody instead of being held in family detention centers run by Immigration and Customs Enforcement. Another five families will likely be reunited after Tuesday, once the background check process is completed.

Six of the 102 children are not eligible for reunification because they have a parent with a criminal history or were separated from someone who is not their parent. Fabian said another 12 have parents in state or federal prison. At least nine will not be reunited by the deadline because their parents were deported without them.

Lee Gelernt, the ACLU’s lawyer in the case, said the government has taken “significant steps” to reunify families since the last hearing on Friday. The ACLU is arguing for new reunification deadlines for some parents, such as those who were already deported, instead of pushing Sabraw to rule that the government is violating the preliminary injunction.

The government has until July 26 to reunite children who are five or older. Secretary of Health and Human Services Alex Azar said last week that there are “somewhere” less than 3,000 kids in government custody who remain separated from their parents, but he did not give a specific number. The fact that the Trump administration managed to reunite only about 60 young kids in two weeks does not bode well for its ability to reunite roughly 2,000 older children by the end of the month.