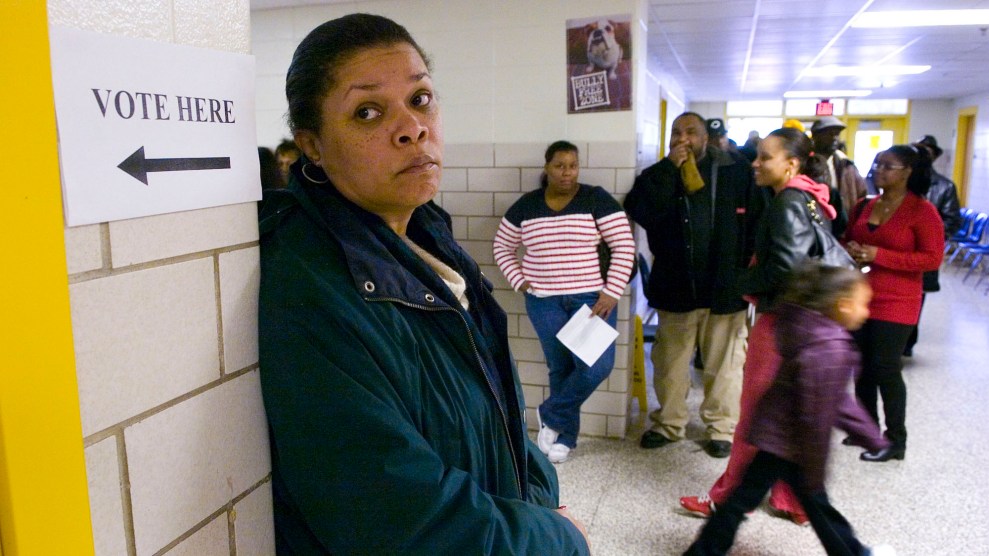 A Georgia voter waits in a long line during early voting in October 2008.Erik Lesser/ZUMA

Civil rights groups are mobilizing to block a majority-black Georgia county from shuttering seven of its nine polling locations for the November elections, alleging that the plan by the county election board is racially motivated voter suppression. The closures would come just before a high-stakes midterm election in which Stacey Abrams, a black woman, is the Democratic nominee for governor.

“This is nothing more than a racially motivated, voter suppression scheme that aims to lock Black voters out of a historic election cycle,” Kristen Clarke, who leads the Lawyers’ Committee on Civil Rights Under Law, tweeted on Sunday. The Lawyers’ Committee, representing three Georgia civil rights groups, sent a letter to the Randolph County Board of Elections and Registration threatening legal action if the plan moves forward.

Closing all but two voting sites would make it logistically difficult for many voters, especially the county’s many low-income residents, to cast a ballot. Some residents would have to travel more than 10 miles to vote in a county that lacks public transportation. According to the Census Bureau, the county is more than 60 percent black, and 30 percent of residents live in poverty, nearly twice Georgia’s 16 percent statewide poverty rate.

Last week, the Georgia chapter of the ACLU likewise threatened legal action against the county. In a letter, the group pointed out that the transportation difficulties of reaching a polling location would fall disproportionately on the county’s poor, black, rural voters. “When polling place configurations or closures have such a starkly disproportionate impact on racial minorities or lower-income rural voters without transportation, such closures almost certainly constitute a violation of the Voting Rights Act or the United States Constitution,” the letter warned.

The ACLU’s letter argued that the timing of the closures was “suspicious.” All nine precincts were open for the primaries this spring, as well as last month’s runoff in the GOP primary for governor. Shuttering most of those locations in November would cause confusion and likely disenfranchise many voters who show up to vote, only to discover their precinct is closed. Moreover, limiting all of the county’s residents to two precincts would almost certainly cause long lines in this fall’s highly anticipated midterms. Abrams is running to be the nation’s first black female governor, and her candidacy is likely to boost African American turnout.

Limiting all of the county’s residents to two precincts would almost certainly cause long lines in this fall’s highly anticipated midterms.

The election board defended its plan at two contentious public meetings last week, according to the local Fox affiliate. A consultant hired by the board explained that the seven locations slated for closure are not compliant with the Americans With Disabilities Act, and the board doesn’t have time to fix the problem before the election. The Lawyers’ Committee, finding the justification unreasonable, submitted a public records request in order to acquire information about how the board reached its decision. Georgia’s secretary of state, Brian Kemp, who is also the Republican nominee for governor, issued a statement urging the county to abandon the plan; Abrams likewise announced her opposition.

The plan to close these precincts was made possible by the Supreme Court, which in 2013 struck down a provision of the Voting Rights Act that required jurisdictions with a history of racial discrimination to clear changes to voting procedures with the federal government. In his decision, Chief Justice John Roberts said that the South had changed since the law passed in 1965, and that the burden of clearing changes with the government was no longer necessary. But the proposal in Randolph County shows the potential for voter suppression that comes without the protections of federal oversight.

Georgia advocates are also turning to local activism to stop the closures. The New Georgia Project, a group that focuses on registering minority voters, plans to collect signatures opposing the change. Under state law, a decision to close a polling location can be overturned if 20 percent of voters in the affected precinct oppose it.

The elections board is scheduled to make a final decision on Friday. The three-member board currently has just two members after the third recently stepped down.