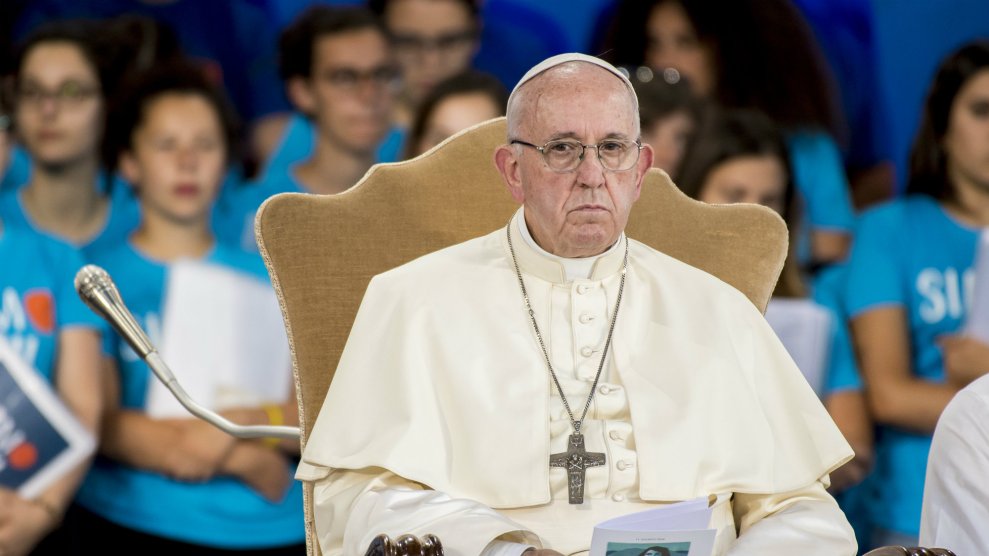 After 38 years on death row, seven execution dates, a campaign by the Catholic governor to reinstate Nebraska’s death penalty, and a long search for lethal injection drugs, Carey Dean Moore is set to die in Nebraska on Tuesday. He will be the first person to be executed in the state in more than two decades. His execution has attracted attention for two very different reasons: First, Nebraska plans to use a controversial and untested cocktail of drugs to kill Moore. Then, Nebraska has a Catholic governor, and this is the first execution to take place after Pope Francis stated unequivocally that the death penalty is unacceptable in all cases.

On August 2, the Catholic Church announced that it would work to abolish the death penalty all over the world, shifting its position from earlier teachings in which capital punishment was considered to be acceptable only if it were “the only practicable way to defend lives.” Nebraska’s governor Pete Ricketts, who is in favor of the death penalty, now finds himself in a situation that many Catholic politicians since John F. Kennedy have encountered. What are the limits of faith when it comes to public policy? In the past, pro-choice Catholic politicians and those who supported same sex marriage have faced criticism for not following the church’s teachings. But Ricketts has consistently supported the death penalty. “While I respect the pope’s perspective,” he said in a statement following the pope’s announcement, “capital punishment remains the will of the people and the law of the state of Nebraska.”

The governor is up for reelection in November. In 2016, he spent $300,000 of his own money for a ballot initiative to reinstate the death penalty after the state legislature abolished it and voters overwhelmingly supported its reinstatement. (Maintaining the death penalty costs the state more than $14 million annually.) He easily won the Republican primary last May and is unlikely to lose to Bob Krist, his Democratic challenger in the fall. Capital punishment is also popular in the state where twenty-three percent of the voters identify as Catholic.

“There is no doubt the state has the responsibility to administer just punishment. However, given our modern prison system, the execution of Carey Dean Moore is not necessary to fulfill justice and, for that reason, would undermine respect for human life.”

For many anti-death penalty Catholics in Nebraska, however, the fact that the pope made his announcement just weeks before Moore’s impending execution offered an opportunity for action. The Nebraska Catholic Conference has stood against executing the 60-year old inmate since the governor issued a death warrant in July. “There is no doubt the state has the responsibility to administer just punishment,” the Catholic Bishops said. “However, given our modern prison system, the execution of Carey Dean Moore is not necessary to fulfill justice and, for that reason, would undermine respect for human life.” After the Pope’s announcement, the NCC reiterated its call to halt the execution saying, “The death penalty is no longer needed or morally justified in Nebraska.”

The liberal political group Seeing Red Nebraska mobilized to align the upcoming execution of Moore with the new Catholic teaching. They planned a demonstration to take place outside St. Margaret Mary Catholic Church in Omaha, where Gov Ricketts worships. On Sunday, nine days before the execution was to take place, dozens of protestors gathered outside St. Margaret Mary holding signs that read, “Who Would Jesus Kill?” It’s unclear if Ricketts was inside the church attending mass at the time, but the protesters weren’t necessarily only there for the governor. “He has a church full of people who sit in a pew with him, and I’d like them to think about this too,” one of the protesters, Carla DeVelder told Mother Jones.

Robert Williams, who was electrocuted in 1997 for the 1977 murder of two women was the last person to be executed in Nebraska. During the execution, witnesses reported seeing smoke coming from his head. Nebraska’s Supreme Court ruled the procedure unconstitutional ten years later, just before Moore’s sixth planned execution date in 2007. In 2011, one of Moore’s lawyers successfully challenged the purchase of one of the lethal injection drugs, which was the reason his execution was stayed that year. After drug manufacturers began to oppose the use of their products in executions, states have gone to extreme measures to obtain drugs to put inmates to death. There too, Nebraska made the extra effort. In 2015, the state tried to have lethal injection drugs imported from India, despite warnings from the Food and Drug Administrations that importing the drugs would be illegal and they would not be allowed into the United States. (The drugs were returned to India.)

Moore will be the first person executed in the United States with the powerful opioid fentanyl, as well as the first person executed in Nebraska with lethal injection. In addition to fentanyl, the state will use diazapem, a sedative, cisatracurium, a muscle paralyzer, and potassium chloride to put Moore to death. This method has never been tried before and medical professionals have expressed concern that the muscle paralyzer may mask any pain the inmate feels. The state is also facing a sense of urgency as its supply of potassium chloride expires at the end of August. A drug company that said it manufactured the potassium chloride had unsuccessfully tried to file a lawsuit to halt the execution. The state, however, is keeping its drug supplier a secret, even though a judge has ordered it to release public records that had been requested by the ACLU of Nebraska.

To anti-death penalty activists, the lengths Gov. Ricketts has gone to execute an inmate are unprecedented. Over the last few decades that Sister Helen Prejean has served as a spiritual advisor for several death row inmates, she has seen a number of highly dramatic situations. One of them involved an inmate who insisted he was innocent in the murder of a young couple, whose story she wrote about and eventually  became the 1995 film “Dead Man Walking.” Nonetheless, even with all her experience, she told Nebraska’s NPR affiliate that she’d never seen a governor “go to such extreme costs or trouble to have a human being executed.”