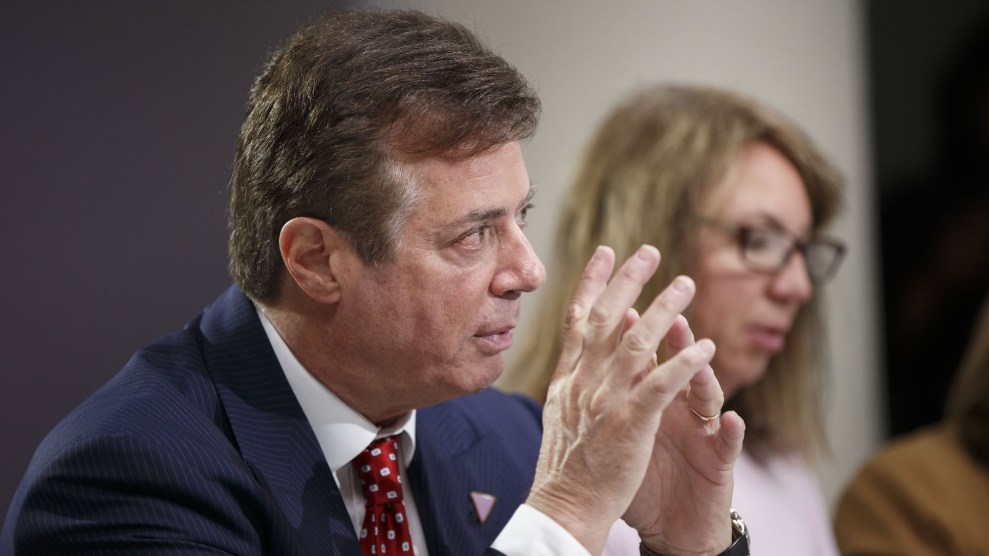 An Alexandria, Virginia, jury has found former Trump campaign chairman Paul Manafort guilty of tax and bank fraud. The jury convicted the Republican of 8 of the 18 charges he faced, deadlocking on 10 counts.

In the 10 other charges (noted with an X here), the Paul Manafort jurors could not come to a conclusion pic.twitter.com/oKawCYhNfS

Manafort is the first defendant charged by special counsel Robert Mueller to be convicted in a trial. Several targets of Mueller’s probe, including Manafort’s longtime employee Rick Gates, who testified against Manafort, have pleaded guilty and cooperated with prosecutors.

Leaving the courthouse on Tuesday evening, Manafort’s lawyer Kevin Downing said his client was “disappointed” by the outcome of the trial and “evaluating all his options at this point.”

Manafort was charged with money laundering and evading taxes by disguising more than $30 million in income he received from the Ukrainian government and Ukrainian businessmen to promote the country’s then-president, Viktor Yanukovych, a pro-Russian leader. Manafort’s earnings dried up when Yanukovych was ousted by a popular uprising in 2014, causing the longtime Republican operative to resort to defrauding banks to secure loans he used to support a lavish lifestyle, the government said.

Manafort, a veteran GOP operative who built a lucrative lobbying business in the early 1980s, had properties in Florida, Virginia, and New York, including an estate in the Hamptons and an apartment in Trump Tower. He ducked taxes by using offshore funds to buy hundreds of thousands of dollars worth of suits, antique rugs, landscaping, and other luxury items, prosecutors said. Evidence that he purchased a $15,000 ostrich jacket drew wide attention.

Manafort did not testify, and his lawyers called no defense witnesses. They attempted instead to challenge the prosecutors’ case by attacking Gates, who testified that he had committed crimes at Manafort’s behest. Gates admitted to stealing funds from Manafort and other employers. Manafort’s lead attorney, Kevin Downing, asserted that Gates, who had handled various tasks for Manafort, including overseeing foreign bank accounts and assisting Manafort’s tax preparation, had masterminded many of the crimes with which Manafort was charged. Prosecutors undercut that case by presenting witnesses and documents that showed Manafort keeping a close eye on the financial maneuvers detailed during the trial. They presented four years of tax returns in which Manafort stated, falsely, that he did not have foreign bank accounts, and emails in which he pressed employees and financial professionals to complete transactions prosecutors said he knew were illegal.

“I would say he was very knowledgeable,” Heather Washkuhn, a former Manafort bookkeeper, testified. “He was very detail oriented. He approved every penny of everything we paid.”

Manafort’s conviction is a serious blow to Trump, but things will likely get worse for the president if his former campaign chairman tells Mueller everything that he knows.

Manafort faces another trial scheduled to begin next month in Washington, DC, on charges that include acting as an unregistered foreign agent for Ukraine and obstructing justice by attempting to influence the testimony of witnesses in the case.

Mueller is investigating potential coordination between the Trump campaign and Russian government agents charged with interfering in the 2016 presidential election to help Trump. Those allegations did not figure directly in Manafort’s case, but Mueller has authority to prosecute crimes discovered as part of his ongoing probe.

Manafort’s guilty verdict is a blow to Trump, who has tweeted in support of Manafort and faulted Mueller for trying Manafort for crimes not directly related to conspiring with Russia.

Manafort has now been convicted of engaging in bank fraud while he headed Trump’s campaign. That fraud included overt corruption: Manafort was accused of offering to ensure a Chicago banker, Stephen Calk, became army secretary under Trump in exchange for approving one of Manafort’s loans.

The Manafort investigation has also revealed that while he oversaw Trump’s campaign, he was in contact with his longtime Ukrainian business partner, Konstantin Kilimnik, who the FBI claims maintained ties to Russian intelligence. Manafort was also deep in debt to a Russian oligarch, Oleg Deripaska, and offered to brief Deripaska on the campaign.

While Gates, former Trump national security adviser Michael Flynn, and former Trump campaign foreign policy aide George Papadopoulos have opted to cooperate with Mueller in exchange for leniency, Manafort alone chose to fight the charges against him. Today, he lost, potentially ratcheting up pressure for the GOP operative to help Mueller’s team to avoid a sentence that could land him in prison for decades. Manafort’s conviction is a serious blow to Trump, but Cohen’s plea deal, implicating the president in campaign finance crimes, is a disaster for Trump and his under-fire administration.