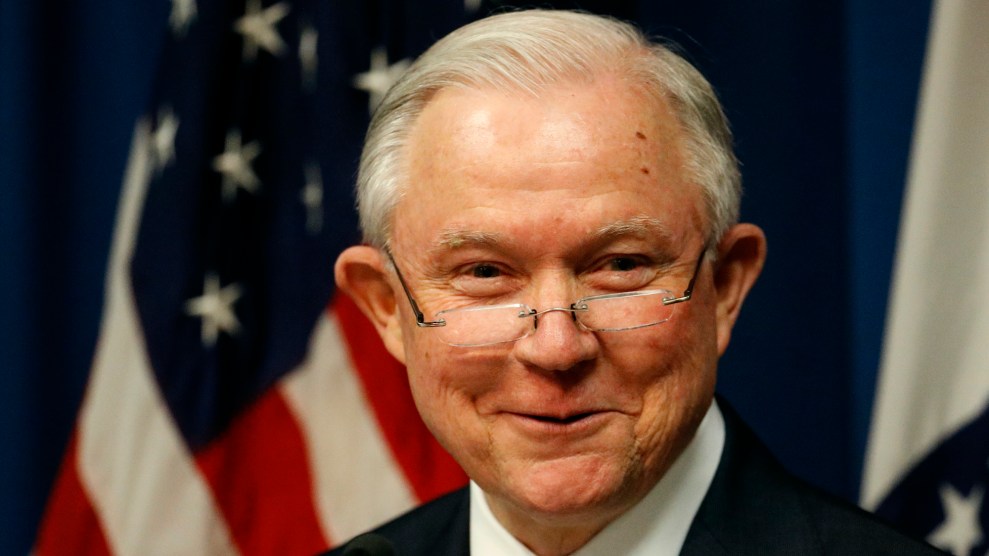 A new decision from Attorney General Jeff Sessions is likely to make it dramatically harder for tens of thousands of asylum-seekers to get out of detention.

On Tuesday, in a now-familiar tactic, Sessions used his broad authority over America’s immigration courts to refer a case to himself. The move will allow him to reinterpret a 2005 decision from the Justice Department’s Board of Immigration Appeals that gives some migrants the ability to get out of detention on bond. Sessions now appears likely to strip many detained immigrants of that right.

The self-referral comes two weeks after the Trump administration proposed a rule that would allow it to detain migrant families indefinitely. Combined, these two moves would make families seeking asylum much more likely to spend months or even years in detention.

Under current law, asylum-seekers who cross the border without authorization are entitled to bond hearings before an immigration judge if they establish a credible fear of being persecuted in their home country. In a strange twist, asylum-seekers who request protection at official border crossings—the government’s preferred route—must ask Immigration and Customs Enforcement (ICE) to grant them parole, rather than asking a judge to grant bond. That distinction matters because ICE has shown an almost complete unwillingness to grant parole under Trump.

Eleanor Acer, the director of the refugee protection program at Human Rights First, says eliminating bond hearings would have an “absolutely devastating impact” on migrants because of the difficulty of being granted parole by ICE. “This is just not who we are as a country,” she says. “This should not be a country where people are thrown into jails and not even allowed to see a judge who decides whether or not they could be released from detention or not.”

Sessions’ decision to review the case is the latest step in the Trump administration’s systematic crackdown on asylum-seekers. In June, Sessions all but eliminated gang and domestic violence as grounds for asylum after referring a different case to himself. Earlier this month, the Trump administration proposed a rule to terminate the Flores settlement agreement, a two-decade-old court settlement that prevents the government from detaining migrant children for more than about 20 days. The proposal would allow the Trump administration to detain families indefinitely.

Sarah Pierce, a policy analyst at the Migration Policy Institute, calls Sessions’ referral a “natural progression” of the administration’s efforts to detain more migrants. “This administration is like a very well-coordinated ballet of hardline immigration policies,” she says.

In February, in Jennings v. Rodriguez, the Supreme Court reversed an appeals court decision that found that asylum-seekers who arrive at border crossings, as well as some other migrants, have a right to bond hearings before an immigration judge every six months. The court’s five conservative justices decided that there was not a statutory right to those hearings, but sent the case back to the lower court to evaluate whether there is a constitutional right to bond evaluations. Sessions wrote in his referral that Jennings v. Rodriguez may require him to overturn the 2005 decision from the Board of Immigration Appeals about bond eligibility, but he did not explain why.

A class-action lawsuit filed by three groups—the American Civil Liberties Union, Human Rights First, and the Center for Gender and Refugee Studies—in March showed that in five of its 24 field offices, ICE paroled 92 percent of eligible asylum-seekers between 2011 and 2013. In the first months of the Trump administration, from February to September 2017, ICE’s parole rate dropped to less than 4 percent in those offices. The El Paso, Texas, field office denied parole in all 349 cases it heard.

James Boasberg, a district court judge in Washington, DC, ordered ICE in July to provide individualized parole reviews for migrants and keep them in detention only if they are a flight risk or a danger to the community. Boasberg was essentially ordering ICE to do what it already claimed to be doing, since a 2009 ICE parole directive, which is still in effect, required individual reviews. But earlier this month, the plaintiffs said in a court filing that the Trump administration appears to be violating its parole directive. Data the government submitted to Boasberg last month showed that only 25 percent of asylum-seekers in the five ICE field offices were granted parole in the six weeks after he issued his injunction. The plaintiffs are asking Boasberg to force the government to produce evidence that is complying with his order or, alternatively, to show why it should not be held in contempt of court.

Ansly Damus, a Haitian national who is the named plaintiff in the class-action lawsuit, has now been detained for 23 months. He has not been outside in nearly two years because the Ohio jail where he is being held does not have a recreation area, according to a court filing. Damus was denied parole again after Boasberg’s injunction. He had already won asylum twice, but the Department of Homeland Security was able to keep him in jail by appealing those rulings.

Elizabeth Ford, Damus’ lawyer in Ohio, says that the most recent parole denial was “particularly egregious” in light of the court order. The denial was just a form letter with no explanation, she said.

Asked if she thought ICE made a good-faith effort to review his parole request, Ford didn’t hesitate. “Oh, no, they’re not seriously considering this,” she said before adding, “That’s ridiculous.”