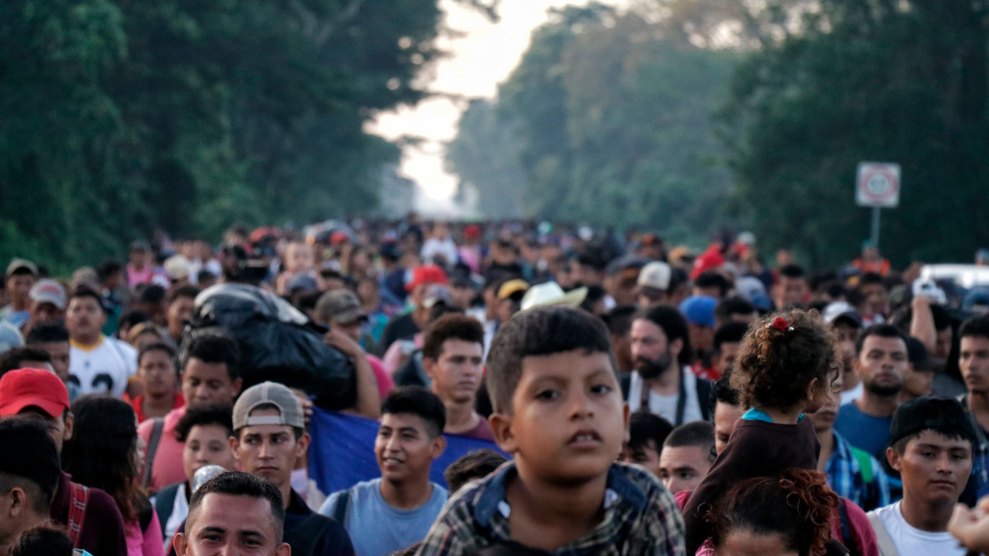 On Sunday, thousands of Central American migrants left Mexico’s southern border and marched north as they made their way to the United States to seek asylum. The caravan, which has drawn the ire of President Donald Trump, began in Honduras on October 13 when roughly 3,000 migrants left the town of San Pedro Sula. By Sunday morning, their numbers had reached at least 5,000.

Thousands used rafts to illegally cross the Suchiate River that borders Guatemala and Mexico on their trek before eventually re-forming with the mass migration. At one point on Saturday, Mexican officials blocked a group of 1,000 migrants trying to enter the country’s southern border.

This spring, a caravan organized by the migrant advocacy and support group Pueblos Sin Fronteras (People Without Borders), made a similar trek.

Trump has seized on the caravan in campaign rallies this week, calling the migrants “very bad people,” blaming Democrats for the migration, requesting Mexican officials stop the migrants in their tracks, and threatening to shut down the US-Mexico border.

“These are some bad people coming through. These aren’t babies, these aren’t little angels coming into our country,” Trump said on Friday at the White House.

In fact, many of the migrants are small children. Here’s a look at the group’s journey.

Thousands upon thousand of people in migrant caravan making first steps through Mexico , en route to US pic.twitter.com/yz9mQRgTsg

BORDER CRISIS: A caravan carrying more than 3,000 migrants was halted at the Mexico-Guatemala border. Hundreds have managed to cross, but hundreds more are still stuck https://t.co/M9XIWQFxfw pic.twitter.com/SzCKtXRXUy

Tonight stragglers from the migrant caravan who’ve smuggled themselves into Mexico from Guatemala, are bedding down in the town square. Tomorrow many will begin trek northwards pic.twitter.com/eSeYWGNy60

The migrant caravan marching in Mexico this evening. pic.twitter.com/kw2JC41p1X

Incredible scenes in Ciudad Hidalgo, Mexico, as migrant caravan marches to urge others stuck on bridge to cross. pic.twitter.com/h4DwaxC1Ss

Members of the migrant caravan in Mexico calling those stuck on the border bridge to come over the river. pic.twitter.com/XRfkHxYmK8

Thousands on the migrant caravan marching further into Mexico. Federal police around and in helicopter but so far letting them advance… pic.twitter.com/SpXLv1iBI6

MIGRANT CARAVAN: They’ve arrived in Tapachula after walking 8+ hrs. Many have taken off their shoes and are limping. pic.twitter.com/3TWKuVwhFv

People from the migrant caravan filling up the central square in Tapachula. It's going to get very crowded with the thousands more arriving but spirits are good now. pic.twitter.com/0jiyCrM7Ar

The migrant caravan has arrived in Tapachula, Mexico. pic.twitter.com/q2bSaECuWP