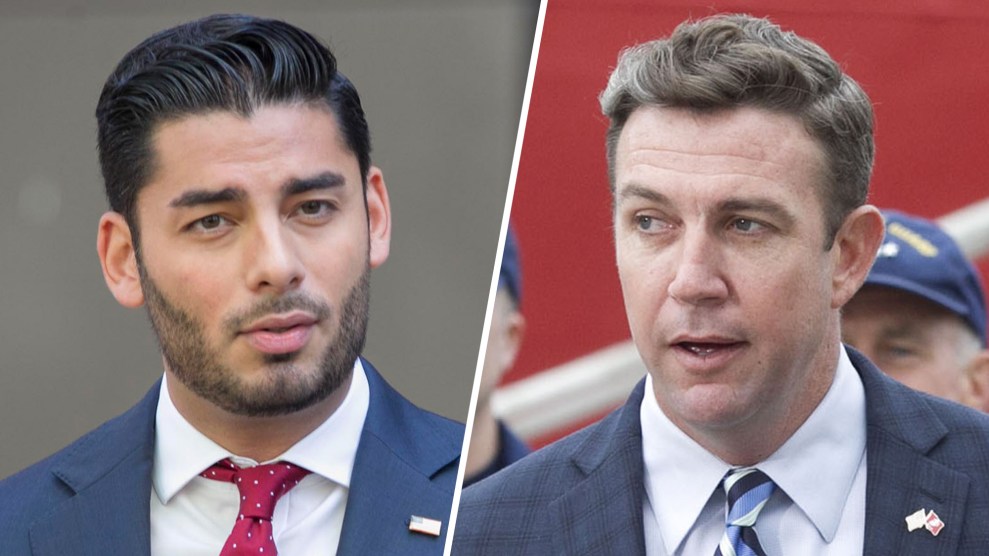 In any other election year, Ammar Campa-Najjar, a young Palestinian Mexican American running to unseat a five-term Republican congressman in one of California’s most fiercely red districts, wouldn’t stand a chance. But these are strange times in the 50th District. Sitting in a café in San Diego last week, Campa-Najjar, dressed in jeans and a lightweight bomber jacket, lays out the reasons he thinks he’ll win on Tuesday. He’s confident, but he’s antsy. “I want to know already,” he says. “I’m not good at sitting still.”

Long after the telegenic 29-year-old entered the race in April 2017, he was best known as the “hot guy running for Congress.” Then, in August, a 60-count federal indictment for a laundry list of campaign finance violations dropped on his opponent, Republican Rep. Duncan Hunter Jr. The scandal thrust Campa-Najjar into the national spotlight, and suddenly, he had to prove he wasn’t just a pretty face.

To beat Hunter, Campa-Najjar will have to clear what was previously considered an insurmountable hurdle for Democrats. The 50th District, which straddles portions of San Diego and Riverside counties, is deep-red territory. President Donald Trump bested Hillary Clinton there by 15 points in 2016. A Hunter—first Duncan Sr., now Duncan Jr.—has won every congressional election by margins of between 15 and 30 points for the past 37 years.

“If this was the 49th, Duncan would be toast,” says Jerry Kern, a Republican city councilman in Oceanside, referring to the neighboring district where a Democrat may flip Rep. Darrel Issa’s soon-to-be-vacated seat. “The 49th is more cosmopolitan, more diverse. The 50th is whiter and older and more conservative.”

Still, there’s no denying that Hunter’s brand has been damaged with some Republicans. Nancy Clancey, an 87-year-old San Marcos resident, has voted for the Hunters since 1980. “I’ve been a Republican all my life,” she tells me. She read about Hunter’s indictment and then saw Campa-Najjar speak. She was impressed. “I decided this is the time I’m going independent,” she says. “I’m not going to be forced to vote for people I don’t believe in.”

Despite Campa-Najjar’s generally progressive platform, he has hit some notes that could appeal to disenchanted Republicans. He has said he’s concerned about the national debt, has some reservations about sanctuary city policies, and wants to know how we will pay for social benefits and entitlement programs. “[Republicans] say, ‘You’re not a tax-and-spend liberal, you’re not a Pelosi Democrat,'” he notes. And as much as the liberal “resistance” may dislike it, Campa-Najjar says he’s willing to work with President Trump. “Especially for our district, we have to work with Trump,” he says. “If he helps my district, I’ll work with him; if he doesn’t, I’ll be a check and balance against him. We have to take a stand and understand Trump supporters. We can’t demonize or normalize. We’re always yelling at people and not listening.”

The son of a Mexican American mother and a Palestinian American father, Campa-Najjar spent three years of his childhood—from age 9 to 12—living in Gaza before he returned to the United States, where his mother raised him and his brother. He’s also the grandson of a member of the terrorist group that attacked the 1972 Munich Olympics, a fact the Hunter campaign has attempted to exploit through racist attack ads and comments. Campa-Najjar, a Christian, was born 16 years after his paternal grandfather died and received multiple security clearances while working for the Obama administration. Yet Hunter and his campaign have suggested he is a “radical” Muslim and “Islamist” who is trying to “infiltrate” Congress. With nothing to support the claims, they have branded Campa-Najjar a “security threat” and “a risk we can’t ignore.”

“With these attacks, he shot himself in the foot,” says Campa-Najjar. “Hunter got off message. He could have made it about policy contrasts, and he ruined it.” Rather than rally Hunter’s Republican base, Campa-Najjar thinks the attack ads are pushing them away. “We’re hearing from a lot of independents and even Republicans who have seen him attacking me on racial grounds and say that a vote for Hunter is a vote for racism. His indictment, coupled with his character flaws—blaming his wife, blaming me—they have really hurt him.”

“The whole premise,” Nick Singer, Campa-Najjar’s communications director, interjects, “is you got one guy who has had two security clearances from the FBI, and the other guy who has been indicted by the FBI. It highlights Hunter’s biggest flaws.”

The charging document against Hunter Jr. and his wife, Margaret, is 47 pages of eye-popping allegations, including that the couple used campaign funds to fly their pet rabbit around the country (earning Hunter the nickname “Duncan Thumper” among some detractors). According to the indictment, the Hunters also used campaign funds for “Hotel rooms, airline tickets and upgrades, meals and food, and entertainment expenses for vacations for themselves and their friends and family,” including trips to Hawaii and Italy, and “stole more than $250,000 in campaign funds to purchase goods and services for their personal use and enjoyment.” When Hunter’s staff warned him about his wife’s use of campaign funds, he allegedly accused them of disloyalty for “trying to create some kind of paper trail on me.”

Hunter eventually went full Infowars, blaming the Democrat-controlled “deep state” for his legal woes, but only after he went on Fox News to say it was all his wife’s fault since she handled his books: “She was also the campaign manager, so whatever she did, that’ll be looked at too, I’m sure, but I didn’t do it.”

“The joke in DC and around San Diego is anytime something goes wrong, it’s: ‘Oh, it must be Margaret Hunter!'” says Shawn VanDiver, a Navy veteran and progressive activist who runs the San Diego Truman National Security Project, a national security think tank and advocacy organization. VanDiver points out that Hunter’s alleged campaign finance violations also exposed his extramarital affairs and highlighted his drinking habits. (Hunter is a member of the “bros caucus,” known for its frat-house-style partying.) Hunter is the real security threat, says VanDiver. “He’s got financial issues; he’s got a penchant for drinking a lot; he has marital problems. He’s the kind of guy bad actors would like to exploit to get intel.”

Prior to this scandal, Hunter was known outside of the district as the representative who vaped during a Congressional hearing and who’d accomplished little beyond authoring an amendment to a defense bill that would expand the military draft to include women—meant as a joke to protest putting women in combat roles. It got so much support that he ended up voting against it.

For months, Campa-Najjar has been closing the gap in the polls. The most recent poll, released Tuesday, shows Hunter’s lead dwindling to three points, with a 4.8-point margin of error. And Campa-Najjar has consistently outraised Hunter, bringing in $1.4 million to Hunter’s meager $132,500 in the third quarter of this year alone. About 95 percent of contributions for Campa-Najjar have been from individual donors, compared to just over half for Hunter.

Campa-Najjar has a casual, confident air, and he knows his way around local and national issues. Last Wednesday, he gave an off-the-cuff speech on “generational inequality” at a community college. He riffed with a group of 50 or so students about the cost of college, the potential difficulty of finding good jobs, and the concern that if things continue as they are, “our generation will have to tighten the belt on Social Security and Medicare.” When climate change came up, a student asked, “How do you convince people of the urgency of it without freaking them out?” “Without freaking them out? We’re going to all die if we don’t fix this problem,” Campa-Najjar said, to laughs. “The whole world will sing ‘Kumbaya.'”

As Campa-Najjar has hit his stride, Hunter, like many California Republicans this year, has been almost invisible in his district. “We’ve had town halls; we had a debate two weeks ago, and he never showed up. His dad did that bizarre press conference.” (Earlier this month, former Congressman Duncan Hunter Sr. hosted a press conference calling Campa-Najjar a “security risk” and said, “As an American congressman, he would have the right to know about American troop movements in the Middle East.”)

Yet Hunter Jr. has largely been absent. It gets awkward, Campa-Najjar says, when he goes to events and is left “shadow boxing for half an hour.” “He’s this hard-charging Marine,” Campa-Najjar says. “I thought he’d put his dukes up and fight for his seat—like he fought for our country. There’s no remnants of that now.”