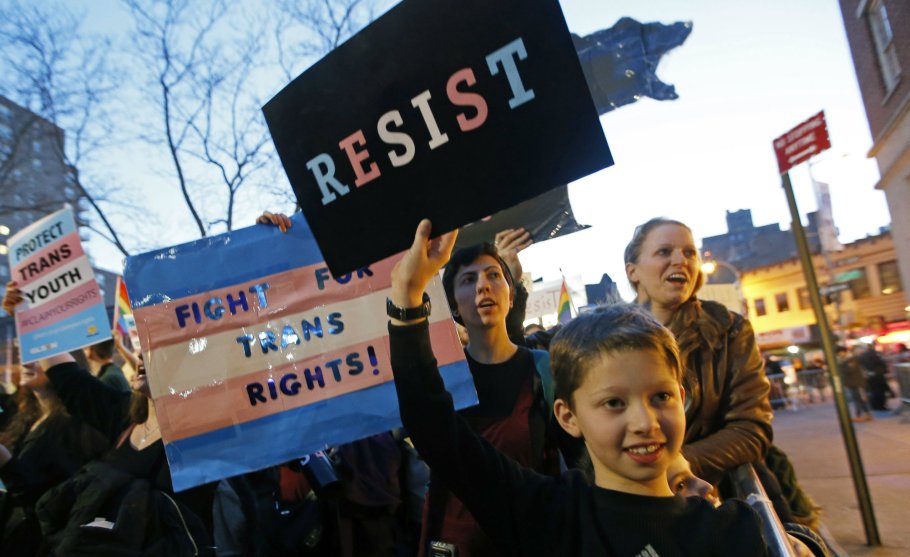 “We’ve gone from a presidency of progress to a presidency of prejudice,” Sarah McBride, the first transgender person to speak at a major party’s political convention, explains on the Mother Jones Podcast. As the national press secretary for the Human Rights Campaign, McBride is describing the difference between President Barack Obama, whom she describes as “the most trans-inclusive president in American history, and there’s no one in second place,” to Donald Trump, whose administration has tried to roll back nearly all the progress the Obama administration made on transgender civil rights.

This week on the Mother Jones Podcast, we wanted to hear from trans listeners about what life has been like for them under the Trump administration. Nearly 60 people got back to us, and we selected a few of them to share. Many did not want to have their names used but were willing to share their words of despair, fear, defiance and hope. We also spoke with Sarah McBride for an inside look at the fight for civil rights, and Ashley Scott, a transgender veteran, about what’s at stake when the administration tries to ban transgender people from the military.

Living under an administration that appears to be determined to take away their civil rights has exacted a serious emotional toll for some who responded. “It has made me live in constant fear for my safety, both mental and physical,” one reader who didn’t want us to use his name told us. “I now wake up in the middle of the night having panic attacks regularly.” (If you need support, you can contact the Trans LifeLine, a crisis support line for trans and gender-nonconforming people, by calling 877-565-8860).

“When Trump was elected, I ended up delaying my transition for almost a year out of fear.”

Others wrote about how the administration’s attacks are keeping them in the closet or have made it harder to come out. “When Trump was elected, I ended up delaying my transition for almost a year out of fear,” Clair Kronk, a 24-year-old Ph.D. student living in Ohio, wrote. “I was scared.” Another woman named Jessica also delayed coming out after the election. “But the momentum of my journey was too strong…and in December of 2017 I came out as a transgender woman,” she wrote. “This was a joyous moment. I am still euphoric today, even as I plan my escape routes and research country’s asylum policies. Each time he tried to do something to this community, it almost embolden[ed] me. Every time he tried to stuff out our flame, I’d begin the next day brighter than ever before. ”

Personal safety has historically been fraught for transgender people, even more so now. Many transgender people reported that they don’t feel safe, and some have even moved. “I just relocated to a more left-leaning city from a conservative city in the south because I thought it would be safer for me,” wrote one reader. “Now I anticipate losing my rights no matter where I live. I’m a…non-binary person and my partner is a trans woman. I fear for my partner’s life more now than ever. She is pausing her transition in part because of these new policies, and I see everyday how much it weighs on her.”

Relocating to progressive cities is one option, but others aren’t sure there is anywhere in the United States that is still safe. “I am taking money that I was saving for gender-affirming surgery and using it to begin trying to immigrate to Canada as a permanent resident because I am so scared for the future,” one woman living in Washington, DC, told us. “I feel like my life and future has been completely derailed and I will be a refugee from my home.”

While it’s been a trying time for transgender communities across the country, many people are speaking out louder and more defiantly in response. For instance, Ántonia Peigahi, a librarian working for a university system in California, decided it was important for her to be out and visible. “For me, it was a moment that…said, you are a public campus figure. You can suck up some of your own fear and a lot of your own ego and do this thing because it may mean something to somebody.”

This is the kind of resilience and support many readers observed in their communities and see as a reason for hope. “We’ve always been here, and no king, tyrant, pope, autocrat, or dictator has been able to erase us,” Tiffany St. Bunny, the director of operations at TransLifeline, said. “That is a testament to the strength and determination of trans people. I am inspired, daily, by the power that we share with each other, and the well of hope that we continue to offer to the world. Hope that we won’t always be oppressed by patriarchal societies and regressive gendered systems.”

To hear more perspectives about what life has been like for trans people under the Trump administration, and to hear more from Sarah McBride and Ashley Scott, you can tune into the Mother Jones Podcast. Be sure to subscribe using any of the following services: