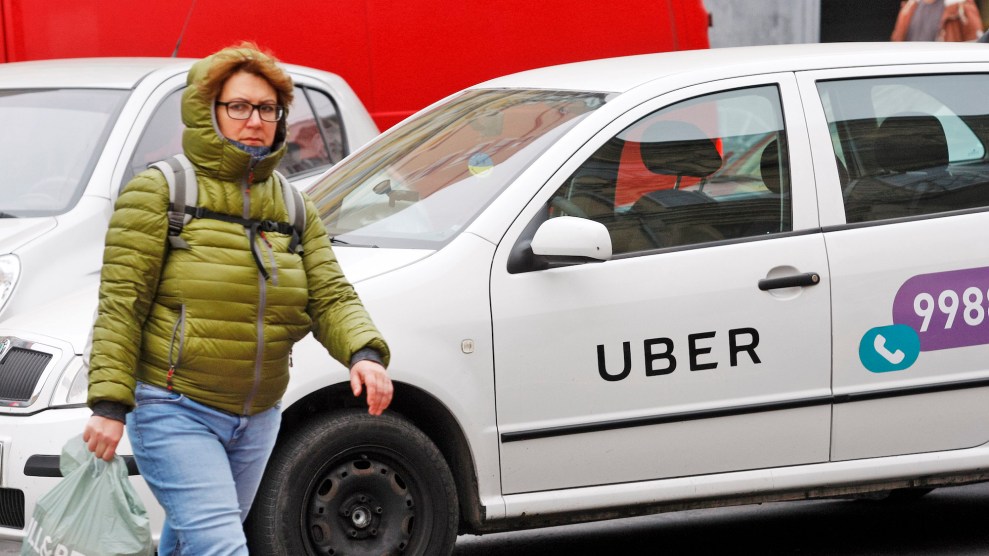 If you’re a frequent passenger of Lyft or Uber, there’s a good chance you’ve met your fair share of drivers. But probably not as many as Alex Rosenblat, an ethnographer and researcher at Data & Society, a nonprofit in New York that studies the social and cultural issues created by new technology. For the past four years, Rosenblat has ridden over 5,000 miles with hundreds of Uber drivers in 25 cities to understand how the ride-sharing company is reshaping work for millions of gig-economy workers.

When Uber was launched in 2009, it seemed like a perfect solution to the post-recession employment gap many Americans faced. All you needed to start a new driving business was a smartphone and a working vehicle—Uber would bring the demand to you. Like many Silicon Valley startups, it promised a technological fix for both consumers and employees. But instead, Rosenblat found, Uber exemplified not just the promise of the gig economy, but the peril of its social upheaval for consumers, cities, and, perhaps most importantly, drivers.

“All of the ways that Silicon Valley companies can collect granular activities on our behavior came to bear out in the workplace.”

Her new book, Uberland: How Algorithms Are Rewriting the Rules of Work, is a timely look at the tensions between technology and the future of employment, and how ambitious startups might be changing the way we see and value work. Mother Jones spoke with Rosenblat about what she learned from drivers, and what she thinks is next for how ride-share companies might continue to transform cities.

Mother Jones: Why did you decide to look at Uber out of the various companies in the “sharing” economy?

Alex Rosenblat: I think it was between Uber and Airbnb, who would come to sort of symbolize the gig economy and its promises and pitfalls. [Uber] was responsive to the fact that a lot of people needed a stop-gap solution following the Great Recession. They might have had their homes foreclosed upon, their business might have been under. With Uber, you could be up and working within a couple of days and you were going to be an entrepreneur. That seemed promising.

Uber also had a policy of blind passenger acceptance, which seemed to resolve this long-standing issues of discrimination when it came to curbside pickup. It didn’t fully resolve that problem, but it seemed like a significant contribution.

“As opposed to having a human boss yelling over your shoulder, you now have this silent algorithm—except it’s not so quiet.”

It turned out that this policy of blind passenger acceptance was actually part of a much wider series of policies that help shape how drivers had to behave on the job.

MJ: So what is algorithmic management?

AR: At Uber, you don’t have a human supervisor managing hundreds of thousands of drivers at work. You have an algorithmic boss, and basically Uber has a system of monitoring driver behavior through the app. It tracks everything from how harshly they brake, to how swiftly they accelerate, to the ratings they receive from passengers on the quality of their service, to their ride acceptance rates.

So, in a way, even though there’s no clear supervisor at work, you’re actually monitored in much more granular ways than a human supervisor could. As opposed to having a human boss yelling over your shoulder, you now have this silent algorithm—except it’s not so quiet. It actually is able to intervene at really key moments such as when you’re starting to log off and you get a note, an in-app notification, that says, “would you like to keep working?” All of the ways that Silicon Valley companies can collect granular activities on our behavior came to bear out in the workplace.

And what Uber could do was use the rhetoric of algorithmic neutrality to claim that it’s had a very hands-off management style towards its drivers. It’s classified drivers as independent contractors, but in fact, through algorithmic management, you can actually leverage significant control over how drivers make decisions. It’s been a lightning rod in debates over whether drivers are potentially misclassified as employees.

Through algorithmic management, you start to see some of the rhetoric of neutrality that starts to fall short. For instance, Uber originally would describe surge pricing as simply a reflection of the marketplace. It was that a surge pricing algorithm was going to measure the supply of drivers compared to the demand of passengers, and when there weren’t enough drivers to fill the supply, the pricing algorithm would go into effect and raise prices. But then you see Uber experimenting with predicting how much you can actually charge passengers based perhaps on their willingness to pay. Something a rhetoric of neutrality ends up obscuring.

MJ: At the same time Uber is being praised for reducing discrimination against riders, it’s algorithms cause a host of problems for drivers. Can you talk more about what drivers face?

AR: In the ’80s, companies made arguments in court like “we only hire white female clerks to staff our retail shops because our customers prefer to shop from white female clerks.” Courts roundly rejected those arguments and said you cannot discriminate on behalf of your customers. But those anti-discrimination laws largely don’t apply to independent contractors, which is what Uber, Lyft, and most gig economy workers are.

But now you have a system whereby removing a supervisor who can evaluate a driver or worker performance, Uber was like,  “why don’t we basically use Yelp, why don’t we use a rating system?” Now the role of manager is effectively transferred to passengers. Uber uses ratings to determine if a driver will be deactivated. So now you have a system where the rating system can mask the biases of passengers themselves. And now passengers can discriminate against drivers in ways that companies can’t do on their behalf.

And that’s a real concern as we look towards the Uber model for employment and scale it across other industries or other services, because crowdsourcing evaluations might be a kind of pool efficiency, but it may also permit bias to be masked in employment evaluations.

MJ: Attempts to regulate Uber over the years have produced a lot of conflict with city governments. Your book is largely an ethnography about drivers. How do they feel about all of this?

AR: The relationship between drivers and Uber changes over time. So at the beginning, when Uber enters a new market, it’s often illegal or operating in an illegal gray-zone, so it actually allies with drivers quite effectively. Uber will recruit them to work on Uber underground and pay their fines, or replace their vehicle if its impounded. Drivers are taking on significant risks because they might face aggression from the established industry of taxi drivers who often protest Uber’s arrival. And so at that point, drivers are kind of pitted against taxi drivers, and later after the industry sort of accommodates the influx of ride hailing services that changes, because once Uber becomes legitimate it usually floods the market with new drivers or over-hires, which creates more competition and also changes the rates.

That’s where you see more common frustration from drivers across the taxi industry as well as from the ride-hailing industry. So alliances actually shift over time, which has, I think affected the ability of cities to intervene in this space. New York City is actually an excellent example of this. They’ve restricted the number of drivers who are going to be able to operate for now.

But at the beginning, it’s hard, because even when regulators do make that effort, they might face a backlash. Uber and similar services are wildly popular. They’re really efficient. When New York’s Mayor DeBlasio tried to regulate Uber [in 2015], Uber displayed a DeBlasio mode in the app. It basically showed no vehicles, implying that if the city was successful in regulating Uber, that it would seriously undermine consumer experience.

And that’s not unique to New York at all. I’ve seen it across multiple cities where Uber will try and rally its consumers as a political constituency.