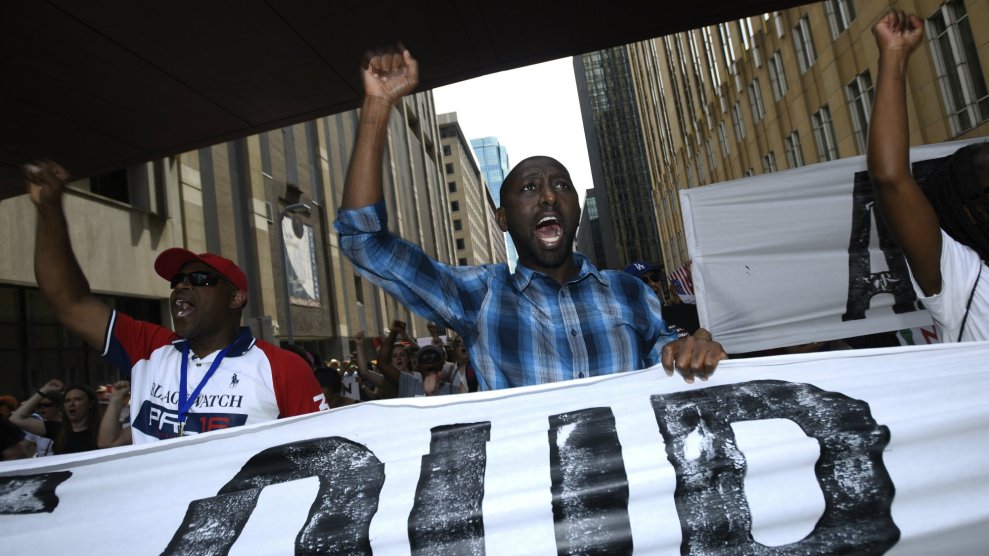 As a Vietnamese refugee who came to the US with her family at the age of 5, Thu Quach understands firsthand how much of a lifeline food stamps and other government aid can be for new immigrants. “When we came to San Francisco, we had nothing,” she recalls. “We couldn’t even fill a suitcase.”

So as soon as she heard that the Trump administration wanted to expand the public charge rule—which penalizes certain immigrants if public benefits account for most of their income—Quach, the chief deputy of administration at California-based nonprofit Asian Health Services, knew she had to do something. Though refugees like her are exempt from the rule, Quach says that she believes everyone deserves a helping hand.

The public charge provision is not new, but the Trump administration’s proposal, which was first leaked back in February, would drastically expand the categories of benefits that would deem an immigrant a public charge. Under current law, certain immigrants who hope to enter the country or apply for green cards could be considered a “public charge” if they’ve ever used cash assistance or long-term medical care. That determination could negatively affect their application—and ultimately lead to a denial. The proposed rule change would expand those benefits to also include Medicaid, SNAP, public housing, and others that many immigrants rely on. It would also take into consideration a number of biographical factors, including an immigrant’s income, their credit score, English proficiency, and the number of children they have—criteria that immigration advocates say would effectively submit these individuals to a “wealth test.”

“I know too well the hardships and heartache of those early resettlement years. I’ve watched my parents cry from worry about making ends meet.”

When the new rule was publicly posted to the federal register in October, it opened up a 60-day public comment period. Though comments may not ultimately determine the outcome of a proposed rule, they’re one of the few ways the public can directly weigh in on and potentially influence the final proposal.

“My entire life, including my professional and personal work, has been shaped by my immigrant experience. I know too well the hardships and heartache of those early resettlement years. I’ve watched my parents cry from worry about making ends meet,” Quach wrote in a comment she submitted on the rule. “Through initial investment that this country made on our family, I was able to attend UC Berkeley, and eventually went on to get my Masters in Public Health at UCLA, and my PhD at UC Berkeley. But I never forgot what this country offered me, and was eager to give back.”

“The proposed public charge rule change hits us right in the gut,” she continued. “I urge you to withdraw the public charge rule… Immigrants have more than paid back what has been given to us plus multi-fold more. We are tired of being a target of this Administration.”

The public charge proposal has so far drawn more than 130,000 comments—many of them revealing alarmed and frustrated outcry, like the one from Quach. And the huge volume of comments isn’t a coincidence: They’re the result of a coordinated effort from a coalition of more than 200 immigration advocacy groups, including Quach’s, that have educated immigrant communities about the changes. Working under the Protecting Immigrant Families (PIF) campaign, the organizations have held hundreds of workshops with community leaders and advised them on how to submit substantive comments. Comments have poured in from public officials, doctors, faith leaders,  and many immigrants themselves.

“We didn’t know if it was possible at the beginning, but the extraordinary outpouring and the breadth [of the comments] really suggests that we were right to think this is hugely important to many people,” says Olivia Golden, executive director of the Center for Law and Social Policy, one of the organizations leading the campaign. “This isn’t a narrow issue affecting a few people, it affects all of us.”

Realistically, the comments, even thousands of moving ones, will likely not halt the Trump administration’s efforts. But the goal is to underscore just how much this rule could affect certain communities, and to “make the stories of individual immigrants relevant,” says Maripat Pileggi, a supervising attorney at Community Legal Services of Philadelphia, an organization that’s also been working to inform immigrant communities about the rule. “It’s really empowering for immigrant communities to make their voices heard in this official way.”

“This isn’t a narrow issue affecting a few people, it affects all of us.”

The PIF campaign also hopes the sheer volume of the comments could potentially delay the rule’s implementation. Federal agencies are required to review comments and respond to “substantive” ones before publishing a final rule. As Golden points out, “If the administration were to make a good faith effort to seriously review more than a 100,000 comments raising a wide array of arguments with an enormous amount of research support… that would take years.”

Once the comment period closes next week, many of the organizations in the coalition will continue working on community outreach to ensure that immigrants don’t drop out of services. Worryingly, several reports have shown an uptick in immigrants dropping out of public benefit programs, including food stamps, due to fears it may hurt their legal status. No matter what, the implementation of the rule won’t be the end of the fight. “Should they put forward a final rule,” Golden says, “there would be litigation.”

The 60-day comment period for the rule comes to a close on Monday December 10. Before then, to understand how immigrants and allies are feeling, in their own words, we’ve pulled some of the most powerful public comments:

Anna Jeon: “I am a women’s health educator in San Jose, CA. I am seeing first-hand the fear the community is experiencing because of the rule change regarding Public Charge. Individuals are putting off seeking health care services until it is absolutely necessary, which jeopardizes the health and well-being of Santa Clara County children and their families… If the public charge rule is finalized in its proposed form, this would mark a significant and harmful departure from long standing immigration policy. The proposal would make and has already made immigrant families afraid to seek programs that support their basic needs. We must stop this attack on our most vulnerable communities.”

Lauren W.: “I am an child of an immigrant and previous Vietnam War refugee… I am appalled and offended by this rule that will judge me or any immigrant by our wealth, status, education, and whether we have asked for public benefits. My mother was a single mother who gave birth to my elder sister within a refugee camp in Indonesia in transit to the US. She would not have been able to move out of poverty had she not had the ability to have affordable childcare and nutrition and food support. I urge you to withdraw the public charge rule, which would undermine our nation’s economic future.”

Madison Szar: “Dear Secretary Nielsen: I am a second year medical student at the University of Florida College of Medicine… If finalized, the proposed rule on public charge would put the health of millions of children and families at risk… I have seen first hand the difficult choice immigrant parents must make, often putting their health and children’s health at risk out of fear of family separation, deportation, and decreased likelihood of citizenship approval. I can recall volunteering at pediatrics night of our community clinic, and having a mom, crying, telling me she did not want any insurance assistance in paying for a breast pump for fear that if she reached out for community services, they would take her infant away…. For many months, pediatricians have seen parents forgoing vital services to keep themselves and their children healthy out of fear that using such programs jeopardizes their chances of getting a visa or green card. Instead of ensuring these children are getting the services they need, we are using these services as a deterrent and bargaining chip for citizenship.”

Maya Shanbhag Lang: “I am the daughter of Indian immigrants… I am horrified by a rule that will judge immigrants by whether they have asked for public assistance… Giving people a hand when they are down is what makes America great. If we step away from basic human decency, if we turn our backs on immigrants, we step away from our position as a leader in the world.

Have we forgotten who we are? We are supposed to be the country that welcomes immigrants. My mother was a doctor, my father an engineer. They contributed enormously to the community. He built tunnels. She saved lives. They brought their talents here because they saw the United States as a welcoming place, not only for ‘successful’ immigrants, but for all. ‘Anyone can come to America,’ my mom always told me. ‘That is what makes this country great.’

Lina Bensman: “I came to the United States with my mother and grandmother when I was five. We were refugees. We had nothing. But every day, I ate fruit and other good, real foods, because my family received food stamps. At elementary school, I was given a hot lunch. I didn’t have to worry about not having enough to eat, or struggle to focus in class while my stomach growled. When my grandmother got cancer—twice—she received treatment through Medicare. And so she did not die, and today, in her mid-nineties, sends me regular emails from her gmail account attaching photos of flowers that she takes on her walks. And of course, when I was still a child, she was able to care for me during the day while my mom worked, because cancer did not take her away from us.

The United States, and the state of California where we lived, invested money and resources into my family… My mother, my grandmother and I all became citizens as soon as we were eligible to do so. I remember how hard my grandmother studied for her citizenship exam, and how proud we all were to be real Americans… We are taxpayers. We donate to charitable and political causes. We have many close relationships with others in our community. Our roots are here.

… Even if we had been less successful (in financial terms), it would still have been good and right for this country to have fed us when we were hungry, cared for us when we were sick… Money alone is not the only measure we should use when deciding whom to help, whom to include. Life is hard enough for immigrants without this petty, penny-wise pound-foolish proposal. What a heartless and short-sighted rule this is. That it was put forward at all is shameful. If it is adopted, that will be more shameful still.”

Note: Some comments do not appear in full and have been trimmed for space.