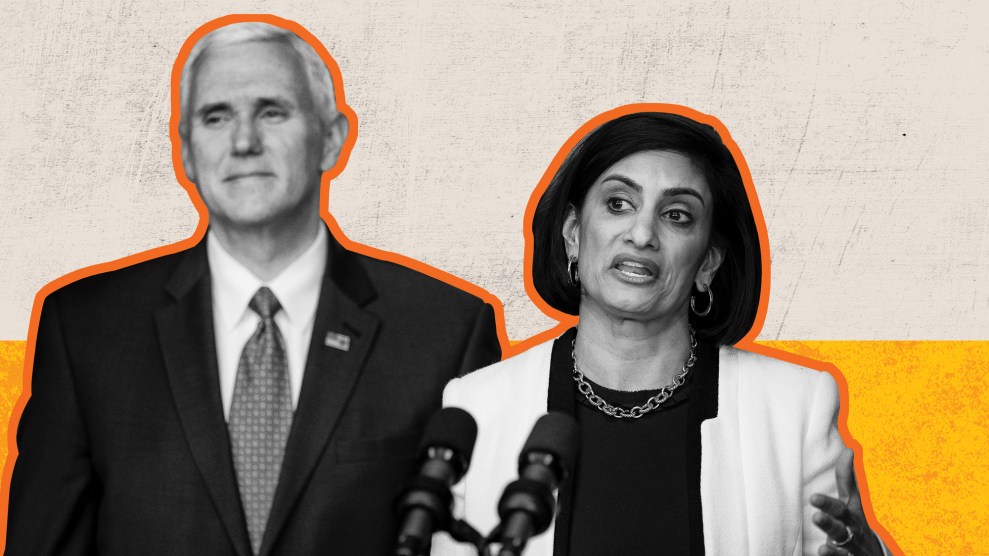 The Twitter accounts of federal government officials aren’t usually known for spicy hot takes. But on Halloween afternoon, Seema Verma, the head of a bland-sounding agency called the Centers for Medicare & Medicaid Services (CMS), sent out a tweet that quickly caught the ire of every lefty on Twitter. “This year’s scariest Halloween costume goes to…” she tweeted, along with a picture of someone wearing a Medicare-for-all T-shirt. Later she followed up: “Did I get your attention? Good. Medicare for All isn’t a joke. It’s a multi-trillion dollar drain on the American economy that will bankrupt future generations. It’s government-controlled health care that will strip choice away from millions. It’s a bad idea. And it IS scary.”

As the Trump administration gears up to put strict rules on who qualifies for Medicaid and other social safety net programs, Verma will be at the helm of the effort—and as her tweet spree revealed, she’s unafraid to implement an expressly ideological agenda. She oversees an agency that has a budget of more than $1 trillion per year and provides health insurance to more than 40 percent of the country. CMS has widespread power to reshape both how health care is consumed and paid for and how core aspects of the marketplace operate.

Verma is often cast as the “wonk in chief” of the conservative health care policy movement. But while she’s been a leading figure in crafting Republican state-level approaches to Medicaid reform for more than a decade, her spot on the government payroll is new. In the past, she’s overhauled state health insurance programs while remaining a handsomely paid consultant. In her new role at CMS, Verma has let GOP-led states put up barriers to health programs and encourage more outsourcing to companies and consultants in ways that will allow businesses like Maximus to keep raking in profits off government programs.

Verma gained a national reputation thanks to her work for Republican governors in Indiana. In 2001, she founded a consulting firm called SVC Inc., and when Mitch Daniels was elected Indiana governor in 2004, Verma helped set up the state’s initial Healthy Indiana Plan. From an office in the state government building, she continued to consult when Mike Pence became governor. She pushed HIP 2.0, which took up Obamacare’s offer to expand Medicaid to childless adults but did so under a waiver that allowed the state to charge premiums, putting many low-income beneficiaries at risk.

It was a lucrative gig. In 2014, the India­nap­olis Star reported that Verma and her company had been paid $3.5 million by the state. Meanwhile, the paper reported, Verma’s firm was also paid $1.2 million by Hewlett-­Packard, which had been awarded contracts with Indiana for its Medicaid program.

Republicans in other states soon turned to SVC Inc. to shape their health plans. When she moved up to head CMS, Verma had to recuse herself from matters involving Arkansas, Indiana, Iowa, Kentucky, Ohio, South Carolina, and Virginia—all states she had worked with as a consultant the previous year.

Once inside the Trump administration, Verma spent much of her first year trying to repeal and replace Obamacare. “Behind the scenes,” Politico reported at the time, “she’s been guiding skeptical Republican senators and governors through the Obamacare repeal proposals and reassuring them that their states will do just fine under the new Medicaid financing system it envisions.”

Her Halloween tweet was far from the first time that Verma had attacked the growing interest in single-payer health care. Verma also helped Trump’s efforts to tie Democrats to Medicare-for-all proposals. At an October conference hosted by the trade association for health insurance companies, Verma said a single-payer system “would decimate physician networks, creating a permanent physician shortage.” It became a frequent topic on her official government Twitter account during the fall, with claims like “We shouldn’t endanger Medicare for the seniors that depend on it. Medicare for all would be Medicare for NONE.”

While she’s indicated she won’t approve waivers for single-payer or other liberal proposals, conservative state governments have gotten a wide pass under Verma’s watch. Obamacare includes a provision about Section 1115 waivers, which allow states to propose alternative plans to run their state programs. That’s how Verma was able to institute Indiana’s punitive rules when she was consulting for then-Gov. Mike Pence. But during the Obama administration, adding a work requirement was a no-go.

That’s changed since Verma took control. In January 2018, her office approved Kentucky’s request to impose work requirements, a decision she personally had to abstain from; the plan is now facing a review in the courts. And CMS has since approved six more waivers for states to add work requirements. One is Arkansas, where 8,000 people have already lost their insurance thanks to work requirements that CMS approved. A study from the Commonwealth Fund projects that when the state’s full work requirements kick in, 30,700 to 48,300 adults—out of 160,000 total—will lose their insurance. “These are conservative estimates,” the study’s authors say. “Additional losses could occur because thousands of adults may be discouraged from applying because of the burdens of the new policy.”

Still, Verma is sticking by the cause. A week before the midterm elections, her office signed off on Wisconsin’s request to impose Medicaid work requirements, the first time a state that hasn’t accepted Obamacare’s Medicaid expansion has been given that leeway. “I have heard the criticism and felt the resistance,” she said of work requirements during a speech in September, “but I reject the premise and here is why: It is not compassionate to trap people on government programs or create greater dependency on public assistance as we expand programs like Medicaid.”