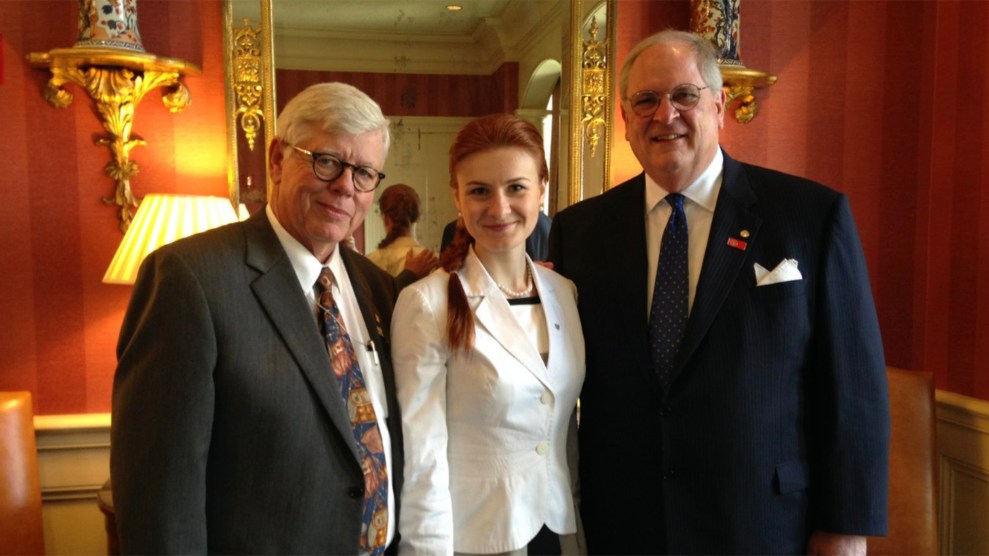 After remaining all but mum for the past two years about news reports detailing its ties to Russia, the National Rifle Association finally spoke up this week. The gun group tried to distance itself from a 2015 trip to Moscow by top NRA officials that was arranged by Maria Butina, who pleaded guilty last year to acting as a Russian agent and participating in a conspiracy against the United States. But congressional investigators are challenging the NRA on what they think is a bogus cover story and stepping up investigations of the group.

The 2015 Moscow trip has drawn attention in particular because it appears to have been a key development in an influence campaign orchestrated by Butina and her handler, Russian official Alexander Torshin, to try to cultivate ties with American conservatives and Republicans—eventually including Donald Trump—and nudge them toward pro-Russia policies. Amid the mounting pressure, NRA CEO Wayne LaPierre finally broke his silence on the matter, asserting through attorneys this week that he had opposed the trip and acted to distance the gun group from it.

But Oregon Sen. Ron Wyden, who is investigating the NRA as the top Democrat on the Senate Finance Committee, has information contradicting the gun group’s claims that it had no “official” connection to the 2015 Moscow trip, sources told Mother Jones. Wyden is preparing a detailed report on the trip. And congressional investigators are homing in on David Keene, a former NRA president who was the trip’s primary organizer on the NRA side, according to people familiar with the matter. “This was driven in large by Keene,” said a person who reviewed NRA emails about the travel plans. Keene, a longtime conservative Republican figurehead and former opinion editor for the Washington Times, also sought an interview with Russian President Vladimir Putin during the trip, according to reports this week, though one did not take place.

Keene received a subpoena from the Senate intelligence committee last year and was recently interviewed by the panel, which is pressing ahead with its own Russia investigation, according to a person familiar with the probes. Meanwhile, a spokesman for Pete Brownell, who was the NRA’s first vice president while on the Moscow junket and later became NRA president, says Brownell is cooperating with investigators.

“I don’t think it’s credible for the NRA to claim that they played no official role in the 2015 Moscow trip,” says Sen. Wyden.

At least five congressional offices, the Federal Election Commission, and the Justice Department are looking into aspects of the NRA’s Russian connections, and prosecutors for special counsel Robert Mueller reportedly questioned at least one witness about the NRA-Russia ties. An NRA lawyer, William Brewer, said in a statement this week that LaPierre, in 2015, had wanted to  distance the organization from the Moscow trip. “When he became aware of the details of the trip, Wayne was personally opposed to it,” Brewer said. He said LaPierre took steps to ensure “that the delegation was not viewed as representing the NRA,” including barring paid NRA staff from going, and discouraging Allan Cors, then the group’s president, from joining the trip. Cors said in a statement that he bowed out because “Wayne did not want any misconception that this was an official trip.”

But Wyden, who has been pressing the NRA with requests for information, disputes that explanation. “I don’t think it’s credible for the NRA to claim that they played no official role in the 2015 Moscow trip,” Wyden told Mother Jones earlier this week. Wyden declined to elaborate, noting that because he also sits on the intelligence committee, his ability to discuss investigative details is limited.

It’s not just Democrats questioning the NRA’s current story. A source close to Brownell maintains that at the time of the Moscow trip, Brownell did not hear that LaPierre opposed the visit. “It was presented as an NRA-related trip,” the source said, adding that “NRA staff was involved in the planning” of the travel.

ABC News reported this week that emails from NRA officials indicated that the group agreed to pay for travel expenses for two delegation members and to provide NRA gifts for delegation members to present to their hosts. “I’ll meet you at the airport,” Butina wrote to members of the delegation on December 3, 2015, according to the ABC report. “For your convenience, in our hands will be a big red sign saying Welcome NRA.”

Ever since the news emerged in early 2017 that the NRA delegation met with senior Russian officials on that trip, the organization has said little about its Moscow ties. It has asserted that it received little money from Russians, and that none went into its $30-million effort to help elect Trump. But the NRA has never responded to questions about its long ties to Torshin, who attended six NRA annual conventions since 2011 and who was treated as a VIP, including at elite fundraising events. US prosecutors have said they suspect Torshin of having ties to a Russian organized crime group—an allegation he has denied. Torshin was among Russian officials sanctioned last April by the Treasury Department.

Keene and Brownell have not responded to inquiries from Wyden and his Democratic colleagues on the finance committee. The Senate intelligence committee’s bipartisan probe, overseen by Sen. Richard Burr (R-N.C.)—who himself has longstanding NRA ties, as Mother Jones and the Trace reported recently—has seen more cooperation from the NRA. Spokespersons for Burr and Sen. Mark Warner (D-Va.), the senior Democrat on the intelligence committee, declined to comment.

Keene did not respond to inquiries from Mother Jones. A spokesman suggested that Brownell is willing to help investigators: “Mr. Brownell is fully cooperating. As such, he certainly would be willing to accept a bipartisan request to testify, assuming his responsibility to assist other ongoing investigations [has] concluded.” The spokesman declined to elaborate on what those other ongoing investigations involve.