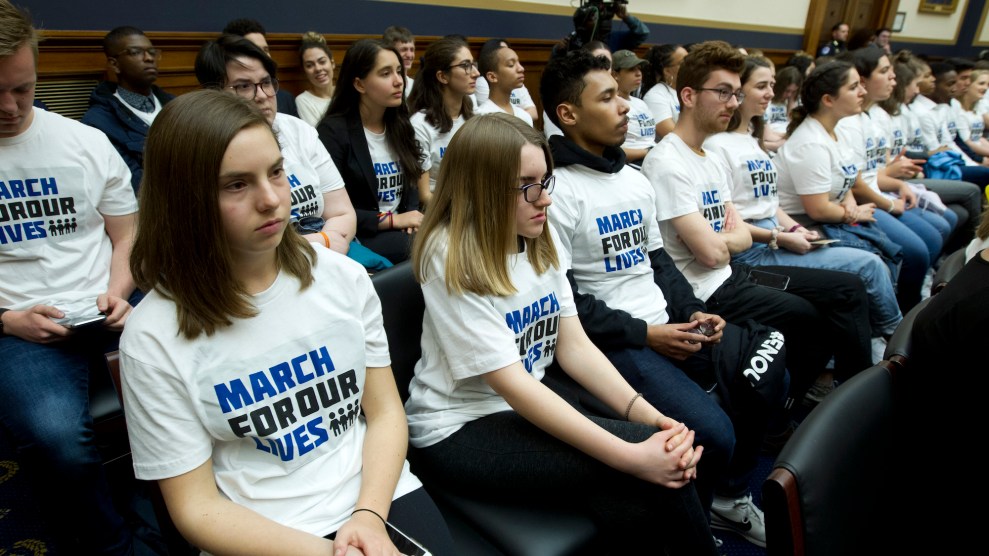 March for Our Lives student supporters listen during the House Judiciary Committee hearing on gun violence on Wednesday.Jose Luis Magana/AP

On Wednesday, the House held its first hearing on gun violence since 2011. The flurry of mass shootings and federal inaction on the issue in the interceding years had created pent-up frustration, which erupted into full view Wednesday from Democrats and a packed room of gun violence victims and activists—especially when Republicans and GOP witnesses pushed unsubstantiated claims about gun violence.

Rep. Ted Deutch (D-Fla.), who represents Parkland, interrupted witness testimony to correct Joyce Lee Malcolm, a law professor and gun rights expert appearing on behalf of Republicans, when she said that Stoneman Douglas High School decided arming teachers was “the best way to protect students.” (It was a state-appointed commission that recommended the Florida Legislature allow teachers to carry concealed weapons.) Deutch vigorously shook his head and mouthed, “No way,” as Malcolm spoke. “When important declarations are factually wrong, it’s important to call them out,” he said when she finished speaking, a gesture that broke with the hearing’s parliamentary procedure.

“When you go more than eight years without a single hearing despite the regular slaughter of Americans all across the country, it’s important that when the debate finally starts that there’s honesty in it,” Deutch told Mother Jones after the hearing.

Wednesday’s hearing, titled “Preventing Gun Violence: A Call to Action,” had no particular agenda. Though Rep. Mike Thompson (D-Calif.) has introduced a bill to implement background checks for all gun sales—the Democratic House’s first gun-related priority—the hearing was not a formal discussion of that pending legislation. Instead, it was structured as an opportunity for lawmakers to hear from gun violence prevention experts and activists who have not had a chance to air their grievances in the House in almost a decade.

Rep. David Cicilline (D-R.I.), another ardent gun control defender, also chimed in to correct falsehoods. When Rep. Matt Gaetz (R-Fla.) argued the baseless claim that gun violence perpetrated by undocumented immigrants is a more pressing danger than gun loopholes, Cicilline cut him off. “Is there any committee rule that prevents a member of Congress from reciting false statements in a committee hearing that are unsupported by the evidence?” he asked chair Jerry Nadler (D-N.Y.). “Are members of Congress allowed to just make things up?” The gallery—at least half of which was composed of March for Our Lives student activists—broke out in applause. (House rules prohibit audience members from making noise during a hearing.)

In today's hearing on gun violence, Dem Rep. David Cicilline followed remarks from Matt Gaetz by inquiring if there was a rule barring lawmakers from making false statements in hearings.

"Are members in Congress entitled to just make things up?"
Applause break out.
Via Politico pic.twitter.com/qYxhpFa3yP

But it was the family members of the Parkland victims who offered the most vocal fact checks. When Gaetz said building a wall at the southern border would offer a promising solution to gun violence, Manny Oliver, who lost his son Joaquin in last year’s massacre, stood up and screamed, “You lie!” at Gaetz. Fred Guttenberg, whose daughter Jaime was also killed, joined him, yelling to remind Gaetz that their children had been killed by an American male. Capitol Police reprimanded Guttenberg and Oliver for their outburst.

Here is the video of @RepMattGaetz trying to get the father of a student killed in Parkland, FL (@manueloliver00) THROWN OUT of a @HouseJudiciary hearing on reducing gun violence.

This is beyond despicable. pic.twitter.com/YZF8EGW3hP

It was familiar territory for Guttenberg: He was escorted out of the confirmation hearings for Supreme Court Justice Brett Kavanaugh after he tried to shake the nominee’s hand. “Here’s the thing: We haven’t stopped being any less emotional. Especially this week—it’s all coming back,” Guttenberg told me right after the exchange. “That performance, to make this hearing about something else—you have all the families sitting here! Don’t do that!”