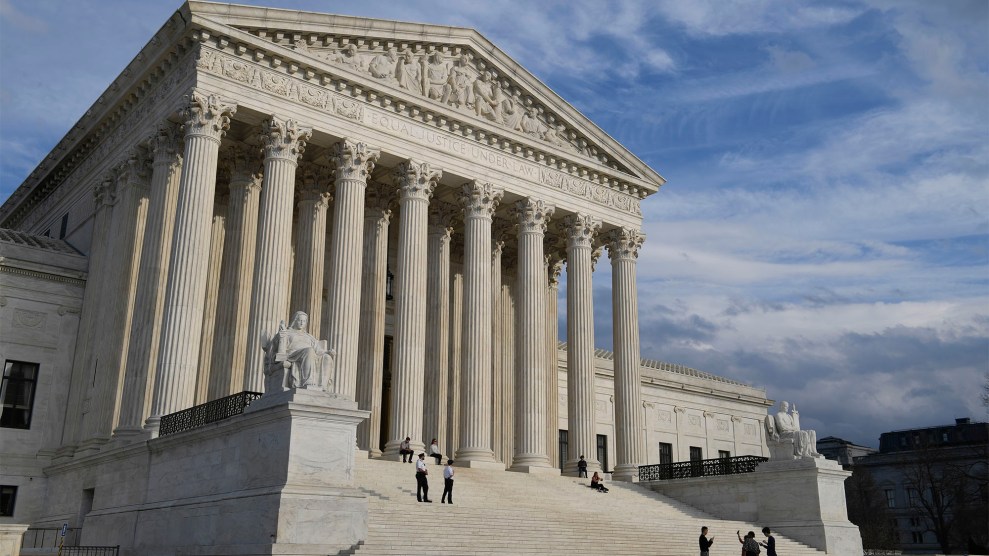 Presented with two cases of extreme partisan gerrymandering, the Supreme Court’s conservative majority hinted that it might preserve these politically motivated maps in order to avoid what it seemed to regard as the most dangerous possible outcome: equal representation for all citizens.

But the Supreme Court’s conservative justices raised the threat of “proportional representation” on more than a dozen occasions on Tuesday to argue against curbing excessive partisan gerrymandering. In North Carolina, Democrats won 49 percent of the vote for the US House in 2018 but Republicans won 75 percent of the seats, an outcome voting rights groups said was fundamentally unfair. “Do you deny that built into this is the idea that we should at least have proportional representation-lite?” Justice Samuel Alito asked Allison Riggs, a lawyer challenging the North Carolina map on behalf of the League of Women Voters. “I’m still waiting to hear what that number, what that formula might be, other than proportional representation?” wondered Neil Gorsuch about the criteria for identifying partisan gerrymandering. “Do you agree,” Justice Brett Kavanaugh repeatedly asked the lawyers challenging the North Carolina and Maryland maps, “that the Constitution does not require proportional representation?” Chief Justice John Roberts pursued a similar line of inquiry.

In both North Carolina and Maryland, party leaders openly admitted they drew their state’s maps to gain a partisan advantage. “I propose that we draw the maps to give a partisan advantage to 10 Republicans and three Democrats, because I do not believe it’s possible to draw a map with 11 Republicans and two Democrats,” GOP state Rep. David Lewis, who oversaw the redistricting process in North Carolina, said in 2016. Maryland Gov. Martin O’Malley said his goal was to “create a map that was more favorable for Democrats” by transforming the state’s 6th Congressional District from a reliably Republican district into a solidly Democratic one.

The two cases represent the last time the Supreme Court can realistically curb partisan gerrymandering before the 2020 elections. If it declines to do so and instead gives its stamp of approval to politically motivated maps, gerrymandering during the next redistricting cycle in 2021 will be even more extreme than in 2011.

Two conservative justices, Roberts and Kavanaugh, seemed more open to striking down the Maryland map than the North Carolina one, asking whether it violated the First Amendment’s right to free speech by discriminating against Republicans based on their political views. “It does seem that this is a situation where the state is taking retaliatory action against Republicans who were in that district and had a more effective vote, and penalizing them for exercising their right to vote by moving them out to a different district,” said Roberts. “You think it’s all right to retaliate against the Republicans from the district that were moved out because of how they voted?” he asked Steven Sullivan, the solicitor general of Maryland.

It wasn’t clear why Roberts didn’t ask the same question of Republicans in North Carolina, and it’s hard to see how the court could objectively strike down a Democratic gerrymander in Maryland, but not a Republican one in North Carolina. But even that outcome could help Democrats in the long run by allowing them to challenge partisan gerrymandering in other Republican-controlled states.

Kavanaugh said he was “not going to dispute” that extreme partisan gerrymandering was a problem. But he said that the adoption of state-level ballot initiatives creating independent redistricting commissions to curb gerrymandering—approved by voters in five states in 2018—made it less urgent for the court to act. “There is a fair amount of activity going on in the states, recognizing the same problem that you’re recognizing,” he told Riggs. Gorsuch repeatedly made a similar point.