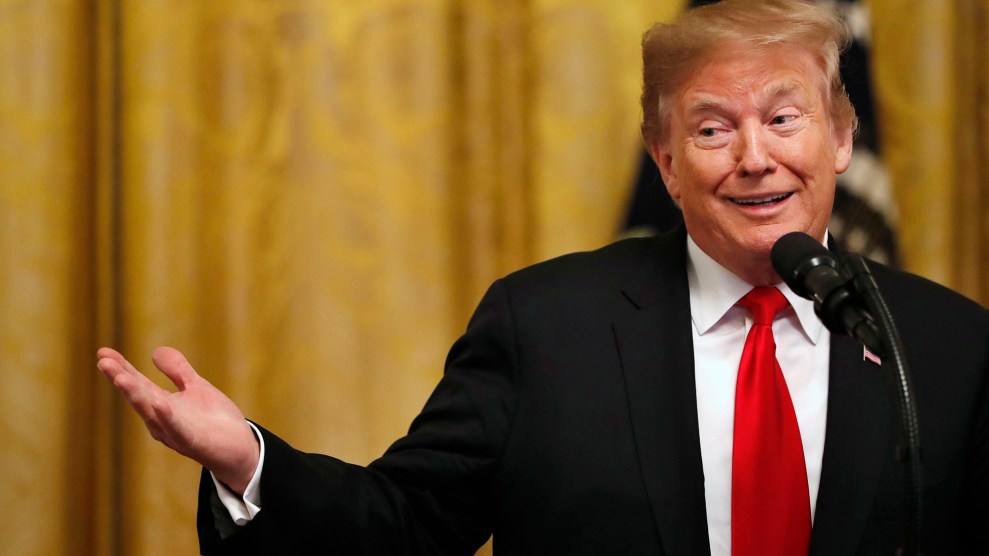 As rumors swirl that Special Counsel Robert Mueller is wrapping up his Trump-Russia investigation, Americans across the political spectrum are anxiously awaiting whatever report he may file with the Justice Department. Several Trump aides have already been convicted or pleaded guilty in connection with the probe; dozens of other people have been indicted.

We don’t yet know what else Mueller has found, what his report will cover, or whether the report (or portions of it) will be made public. But there’s already a lot we do know. At Mother Jones, we’ve been on top of the Trump-Russia story since before the 2016 campaign, when we were the first outlet to reveal the existence of the Steele dossier and the FBI’s investigation of its allegations of a Trump-Kremlin connection. Here’s some of our best coverage of the tangled, wide-ranging, and consequential scandal:

March 8, 2019: Robert Mueller Has Raised Big Trump-Russia Questions. Will His Report Answer Them? by David Corn and Dan Friedman

Lost in much of the speculation is the fact that Mueller has no obligation to produce a report that details all he has uncovered…There is no telling whether Mueller will answer the big questions: Did anyone on the Trump campaign cooperate or communicate with Russia about its attack on the 2016 election? Why did Trump and his aides echo the Kremlin’s disinformation campaign of denial? Did the Trump camp directly signal to Moscow that it appreciated Russia’s assault on American democracy? Was anything else afoot?

Yet throughout his investigation, Mueller, through indictments and other court filings, has released significant information about interactions between Trumpland and Russians—often without supplying complete accounts. Consequently, Mueller has interjected into the public record a host of tantalizing questions about Trump-Russia collusion and related matters. And this raises another query about his final report, whatever it may be: Will Mueller answer the questions he himself has generated?

January 22, 2019: Yes, There Was Collusion. Look at the Manafort Case, by David Corn

Much of the Trump-Russia scandal can seem complicated—and Trump and his defenders have done all they can to create distractions and diversions. But at the center of the affair is an undeniable reality: During the campaign Trump took actions that aided the Russian attack, and as president he continued to bolster Putin’s propaganda line that Moscow had not intervened in the American election. A presidential candidate and president abetting an overseas foe is a counterintelligence nightmare. It’s no wonder that the bureau cautiously approached this matter and did not kickstart a probe until Trump fired Comey and publicly stated that he had pink-slipped the FBI director in part to sideline the Russia probe…

Counterintelligence investigations are the most sensitive probes that the bureau conducts—far more secretive than criminal investigations. So there is no guarantee that any final Mueller report released to the public will address this matter. But the American citizenry does not need any report to know that Trump repeatedly acted as if he were a Moscow asset. And the fact that this has not caused a greater uproar is perhaps one of the most disconcerting and absurd elements of the entire scandal.

Cohen’s plea last month brought attention back to this secret project—which could well be called an act of collusion between Trump’s company and Putin’s office. Still, the full significance of Trump’s deception of the American public has not sufficiently registered. (Has a single Republican leader said boo about it? None that I have noticed.)

This episode is a reminder that other proven acts of Trump deceitfulness have not become the dominant and widely-accepted storylines of the Russia affair. For example, the infamous Trump Tower meeting in June 2016, when Donald Trump Jr., Paul Manafort, and Jared Kushner sat down with a Russian emissary to get dirt on Hillary Clinton. The Trumpsters all say that nothing of use came out of this meeting. But its true import was established before it even occurred: Simply by taking the meeting—which had been described to Trump aides as part of a covert Russian effort to help them win—the Trump camp signaled to the Kremlin that it was fine with a clandestine Moscow scheme to assist Trump, and was willing to secretly collaborate with it.

As special counsel Robert Mueller zeroes in on Roger Stone, prosecutors are looking into seemingly threatening emails the longtime Trump adviser sent to a former radio host, sources say. The existence of some of those emails was first reported by Mother Jones in May.

June 5, 2018: Donald Trump Is Getting Away With the Biggest Scandal in American History, by David Corn

Trump and his amen chorus have been claiming there is no Russia scandal—and insisting the real scandal is the existence of a secret FBI plot against him. They have promoted a perverted version of reality at a volume of 11. By merely forcing a debate over whether the Russia scandal truly exists, Trump clouds a tremendously important matter and scores at least a partial win. He has succeeded in diverting attention from his campaign actions that benefited Putin.

Now attention is focused around a middle-aged Russian central bank official and a photogenic young gun activist from Siberia who share several passions: posing with assault rifles, making connections with Republican lawmakers and presidential candidates, and publicizing their travels between Moscow and America on social media. Alexander Torshin and his protégé Maria Butina also share an extraordinary status with America’s largest gun lobbying group, according to Torshin: “Today in NRA (USA) I know only 2 people from the Russian Federation with the status of ‘Life Member’: Maria Butina and I,” he tweeted the day after Donald Trump was elected president…We built a timeline from hundreds of their photos and social-media posts going back seven years—including previously unreported material—that stirs further questions about their roles.

On January 6—the day the US intelligence community reported that Putin had approved a covert operation to subvert the presidential campaign to assist Trump—Andrew Intrater donated $250,000 to Trump’s inauguration fund.

Intrater is the CEO of Columbus Nova, the lone American affiliate of Renova Group, a giant holding company owned by oligarch Viktor Vekselberg with interests in the metals, mining, chemical, construction, transport, energy, telecommunication, and financial sectors in Russia and abroad. Intrater, an American citizen, is Vekselberg’s cousin, according to filings with the Securities and Exchange Commission. In June, Intrater also made a $35,000 contribution to a joint fundraising committee for Trump’s reelection and the Republican National Committee…Columbus Nova has since said that while Vekselberg has been its largest investment client, Columbus Nova was never “owned by any foreign entity or person including Viktor Vekselberg or the Renova Group.”

January 13, 2017: The Spy Who Wrote the Trump-Russia Memos: It Was “Hair-Raising” Stuff, by David Corn

Last fall, a week before the election, I broke the story that a former Western counterintelligence official had sent memos to the FBI with troubling allegations related to Donald Trump…

The former spy told me that he had been retained in early June by a private research firm in the United States to look into Trump’s activity in Europe and Russia. “It started off as a fairly general inquiry,” he recalled. One question for him, he said, was, “Are there business ties in Russia?” The American firm was conducting a Trump opposition research project that was first financed by a Republican source until the funding switched to a Democratic one. The former spy said he was never told the identity of the client.

The former intelligence official went to work and contacted his network of sources in Russia and elsewhere. He soon received what he called “hair-raising” information…

The former spy said he soon decided the information he was receiving was “sufficiently serious” for him to forward it to contacts he had at the FBI. He did this, he said, without permission from the American firm that had hired him. “This was an extraordinary situation,” he remarked.

October 31, 2016: A Veteran Spy Has Given the FBI Information Alleging a Russian Operation to Cultivate Donald Trump, by David Corn

On Monday, NBC News reported that the FBI has mounted a preliminary inquiry into the foreign business ties of Paul Manafort, Trump’s former campaign chief. But Reid’s recent note hinted at more than the Page or Manafort affairs. And a former senior intelligence officer for a Western country who specialized in Russian counterintelligence tells Mother Jones that in recent months he provided the bureau with memos, based on his recent interactions with Russian sources, contending the Russian government has for years tried to co-opt and assist Trump—and that the FBI requested more information from him…

Mother Jones has reviewed that report and other memos this former spy wrote. The first memo, based on the former intelligence officer’s conversations with Russian sources, noted, “Russian regime has been cultivating, supporting and assisting TRUMP for at least 5 years. Aim, endorsed by PUTIN, has been to encourage splits and divisions in western alliance.” It maintained that Trump “and his inner circle have accepted a regular flow of intelligence from the Kremlin, including on his Democratic and other political rivals.” It claimed that Russian intelligence had “compromised” Trump during his visits to Moscow and could “blackmail him.” It also reported that Russian intelligence had compiled a dossier on Hillary Clinton based on “bugged conversations she had on various visits to Russia and intercepted phone calls.”

The former intelligence officer says the response from the FBI was “shock and horror.”