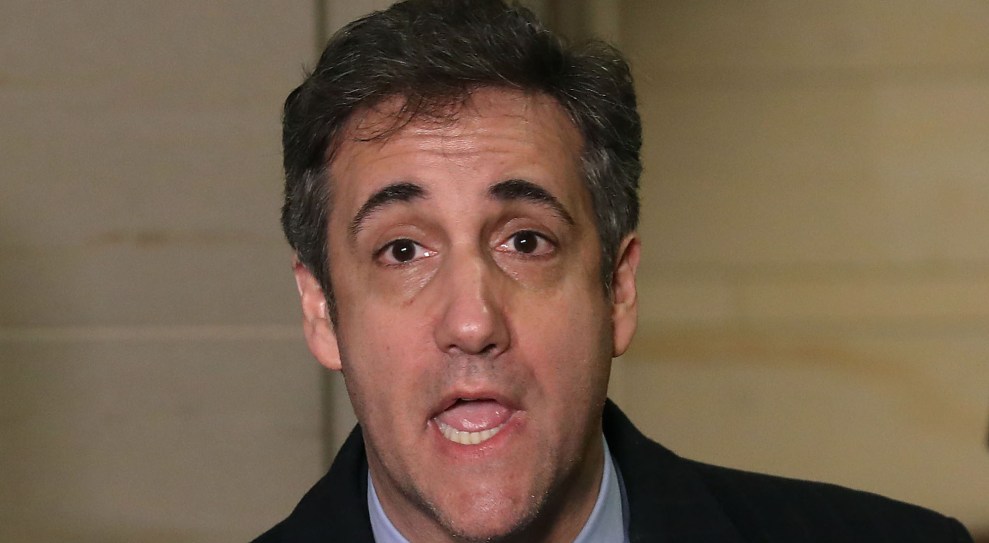 Michael Cohen speaks to the media after appearing at a closed-door House Intelligence Committee hearing on March 6.Mark Wilson/Getty Images

Michael Cohen, President Donald Trump’s former personal lawyer and a former deputy finance chair of the Republican National Committee, claims that he “knows of possible federal campaign finance violations” by the RNC, including its alleged receipt of donations from foreign citizens.

This is a major allegation, but it may be overlooked because it is just one of a number of new or amplified claims Cohen made Thursday in a bid to get congressional Democrats to help him avoid prison. Cohen served as a deputy finance chair for the RNC, a top fundraising post, from April 2017 through June 2018.

In a letter sent Thursday to four Democratic chairmen of House committees, Cohen attorneys Lanny Davis and Michael Monico said Cohen had recently found a hard drive with 14 million files from the past 10 years on his computers and phones that could aid congressional probes into Trump. Cohen is set to start a three-year prison sentence on May 6. His lawyers hope that Democrats will help Cohen convince a federal judge to grant a reprieve “while he is fully cooperating with prosecutors and Congress.”

This claim comes amid mounting investigative attention to possible illegal contributions from citizens of China and other countries. Federal prosecutors in the Southern District of New York, reportedly acting at least in part on information from Cohen, are believed to be investigating whether foreign citizens funneled cash to Republican fundraising committees. Mother Jones has reported that an Asian American GOP activist involved with a December 2017 fundraiser for Trump and the RNC at a restaurant in Manhattan expressed concern that Chinese citizens may have funneled donations through American straw donors in connection with the event.

An RNC spokeswoman said that the committee “only accepts contributions from American citizens in accordance with the law. We vehemently deny any wrongdoing on the part of the RNC or the Trump campaign.”

The memo by Cohen’s lawyers also elaborates on Cohen’s claim that Trump instructed him to lie to congressional committees in October 2017 by downplaying the duration of Trump’s pursuit of a lucrative deal to build a tower in Moscow. Cohen falsely testified that the effort had ended in January 2016. It actually continued until Trump’s election, according to Rudy Giuliani, one of Trump’s personal lawyers.

Cohen testified in February that Trump had encouraged him to lie by repeating claims they both knew to be false. Cohen said he understood based on his experience working for Trump that the president expected Cohen to echo those false claims. In 2016, Cohen said, Trump told him that there was “no collusion, no Russian contacts, nothing about Russia” after the start of his presidential campaign, though both men knew Cohen’s work for Trump on the Moscow deal contradicted those claims. (Trump also lied publicly about the project during his presidential campaign by claiming he did not have business interests in Russia.)

Cohen’s lawyers also say that after Cohen lied to Congress in October 2017, one of Trump’s attorneys congratulated Cohen him on his testimony and said his client was happy with it. Since Trump knew that Cohen’s pursuit of the project had continued for much of 2016, this suggests Trump was pleased that Cohen had lied about the project, the lawyers say.

The memo states that Trump’s daughter Ivanka, whom Cohen says he personally briefed regularly on his pursuit of the Moscow deal, “knew that Mr. Cohen had lied to Congress about that date and yet did not report him to law enforcement authorities for perjury.” A spokesman for Ivanka Trump’s ethics counsel disputed this claim in a statement on Friday. “Ms. Trump did not know about this proposal until after a non-binding letter of intent had been signed, never talked to anyone outside the Organization about the proposal, and, even internally, was only minimally involved,” the spokesman stated. Her only role was limited to reminding Mr. Cohen that, should an actual deal come to fruition (which it did not) the project, like any other with the Trump name, conform with the highest design and architectural standards.”

Cohen’s lawyers also claim that Cohen can outline Trump’s involvement in a “conspiracy to collude” with Russia. Their memo supports this claim by citing Cohen’s allegations, also made during his testimony in February, that Trump knew of and approved a June 2016 meeting in Trump Tower where his son Donald Trump Jr. and other campaign aides hoped to receive dirt from the Kremlin on Hillary Clinton. Cohen also claimed to have heard Trump speaking to his longtime adviser Roger Stone in July 2016 about WikiLeaks’ plans to release stolen emails that were damaging to Democrats.

Republicans have attacked Cohen since he first claimed that Trump instructed him to lie, arguing that he lacks credibility due to his guilty plea to making false statements to Congress in 2017. Republicans also say Cohen lied to lawmakers during his February testimony by denying that he had sought a White House job after Trump’s election.

Trump and his defenders have attempted to dismiss all reporting on Trump’s ties to Russia by citing Attorney General William Barr’s four-page summary of special counsel Robert Mueller’s report, in which Barr says Mueller “did not establish that members of the Trump campaign conspired or coordinated with the Russian government in its election interference activities.” Barr says he will release a redacted version of the Mueller report this month. But so far, the attorney general has produced less evidence to support his claims than Cohen has to back up his own.