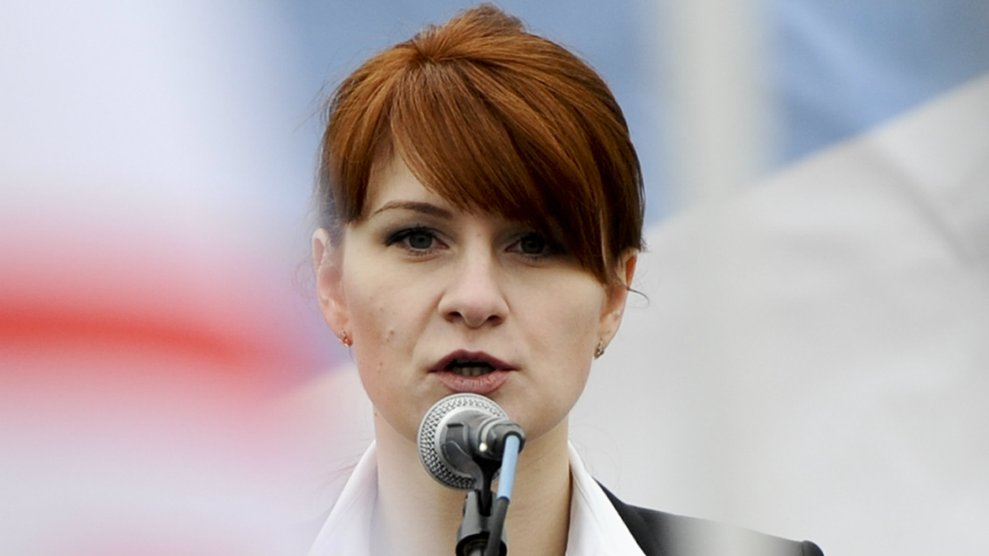 With so much attention justifiably focused on Robert Mueller’s report this past week, not as much notice was paid to a parallel matter regarding another Russian effort to influence policy and politics in the United States: the pending sentencing of confessed Russian agent Maria Butina. But a document filed in that case provides context for understanding the Trump-Russia scandal, and it reads a bit like a spy thriller.

In preparation for a sentencing hearing for Butina scheduled for this coming Friday, the Justice Department submitted a memo requesting that Butina, who faces a maximum sentence of five years and a $250,000 fine, be imprisoned for 18 months. This document depicts Butina running a covert operation to obtain influence for Russia in the United States—with a key target being the National Rifle Association. In contrast, the Mueller report did not explain the counterintelligence aspects of the Trump-Russia scandal. That is, the report did not cover whether the curious series of interactions between the Trump camp and Russians during the campaign were part of a Moscow scheme to penetrate Trump’s circle to develop access and influence. (The report did state that the “Russian government interfered in the 2016 presidential election in sweeping and systematic fashion” and noted that Trump denied the attack was underway while seeking to benefit from it.) Counterintelligence investigations—different from criminal inquiries—rarely become public and often depend on top-secret material that the US intelligence community hates to reveal. Yet it was a counterintelligence concern that first triggered the FBI investigation of contacts between Trump associates and Russians in the summer of 2016. US intelligence wanted to know if Putin’s regime was attempting to get its hooks into Trump or people within his orbit.

Though this matter was left unaddressed by the Mueller report, the Justice Department filing in the Butina case details how Butina, the thirtysomething Russian native who described herself as a gun rights advocate, had used the NRA and the Republican Party in an effort to obtain clandestine influence for Moscow within US politics. And that submission included a statement from a former top FBI counterintelligence expert who noted that Butina’s activities had “tremendous intelligence value” for the Russian government and the potential for “harm to the integrity of the United States’ political processes and internal government dealings, as well as to US foreign policy interests and national security.”

The Justice Department memo is essentially a primer on how an influence operation is conducted. Noting that Butina was an agent of Alexander Torshin, a former Russian senator and a governor of Russia’s Central Bank who was a longtime ally of Vladimir Putin (and who has been accused of having ties to the Russian mob—an allegation he has denied), the submission says that Butina looked for “key information about Americans who were in a position to influence United States politics and took steps to establish an unofficial line of communication between Russia and these Americans.” And, it asserts, her activities were “part of Russia’s broader scheme to acquire information and establish relationships and communication channels that can be exploited to the Russian Federation’s benefit.” Note the reference to “Russia’s broader scheme”—which could possibly include the contacts detailed in the Mueller report.

Butina was something other than the usual secret agent, according to the filing:

Butina was not a spy in the traditional sense of trying to gain access to classified information to send back to her home country. She was not a trained intelligence officer. But the actions she took were nonetheless taken on behalf of [Torshin] for the benefit of the Russian Federation, and those actions had the potential to damage the national security of the United States.

Butina’s responsibilities, according to the Justice Department, included identifying “people who have the ability to influence policy” in Russia’s favor. That is, spotting people who could be of use to Russia, wittingly or not. Here’s where the NRA and the GOP came in. In one memo, she noted that the NRA “plays a central role” in the GOP, stating it was “the biggest sponsor of the US Congressional elections.” She had concluded that the way to the heart of the Republican Party was through the NRA.

Hyping her credentials as a Russian gun rights advocate, Butina—with and without Torshin—over the course of several years attended various NRA events, where she befriended senior officials of the group and was introduced to “influential members” of the Republican Party. This included meeting then-Gov. Scott Walker of Wisconsin at a 2015 NRA event, shortly before he announced his bid for the presidency. Months later at the event where Walker declared his candidacy, Butina was introduced to several of his advisers on international policy. At one point, she told then-Russian Ambassador Sergey Kislyak that she would send him the name of a Walker adviser “who can come to Moscow.” And as has been publicly reported, Butina arranged for senior NRA officials and associates to visit Russia in December 2015, and the filing calls this move “part of the conspiracy’s plan to establish the unofficial channel of communication.” (She even had a romantic relationship with an influential NRA activist.)

In one message to Torshin, Butina noted, “everyone [in the Russian government] has realized that [the NRA] is a valuable contact.” And in a 2016 note she sent him, Butina explained that if Torshin attended the next NRA annual convention in the United States, he would have the chance to speak to “the leaders of the [Republican presidential] primary race.” Such contacts, she noted, could “help form [the candidate’s] correct view of Russian-American relations.” (The previous year, she had attended a conservative conference in Las Vegas and succeeded in asking Donald Trump, then a presidential candidate, whether he supported economic sanctions imposed on Russia by the United States and the European Union after Vladimir Putin seized a chunk of Ukraine. Trump said he didn’t think the sanctions were necessary—a position favorable to Moscow.)

In November 2016, Butina wrote a proposal for Torshin in which she boasted about the GOP contacts she had made. The filing redacts the name of the political party she had targeted, but it was obviously the Republican Party:

In one intriguing passage, the sentencing memo reports that days after Trump won the election, Butina “provided [Torshin] with the name of an individual she claimed was being considered for Secretary of State. She asked [Torshin] to seek the input of the Russian government on the name she provided and told him ‘our opinion will be taken into consideration’ in the United States.” What this means is unclear. Had Butina and Torshin truly developed that amount of influence? Who within Trump’s circles would be taking their opinion into account regarding the appointment of a secretary of state? If she had any sway with the Trump team—as an operative for the Russian government—that would be a significant achievement for Moscow and a counterintelligence nightmare for the US intelligence community.

The Justice Department sentencing memo also points out that Butina used “seemingly innocuous events,” such as so-called US-Russia “friendship dinners,” where wealthy and influential Americans discussed US-Russia relations, in order to “cultivate lines of communication with individuals she believed would have the ear of the next US presidential administration.” In a document obtained by the FBI, Butina noted that these events would be more effective if “the Kremlin’s hand” was hidden. That, she said, would “make it possible to exert the speediest and most effective influence on the process of making decisions in the American establishment.”

So Butina’s goal was clear: Use the NRA to forge relationships with influential Americans—primarily Republicans—whom she could exploit on behalf of Moscow. In one memo, presumably written for Torshin, Butina requested $125,000 to support her work in the United States—and asked for feedback from the Russian government and Russian businesspeople. She raised the prospect that she could use her American contacts to become a “second Pozner”—probably a reference to Vladimir Pozner, a Russian journalist who grew up in the United States and who during the 1980s became best known for smoothly conveying the official viewpoint of the Soviet Union to Americans in idiomatic English.

To emphasize the point that Butina was acting as an intelligence operative, even if she was not engaged in classic espionage, the Justice Department submitted a statement from Robert Anderson Jr., a former assistant director of the FBI’s counterintelligence division, about the Butina case. His assessment was blunt:

Anderson stated that Butina “focused specifically on Americans with political influence and Americans who had access or were expected to acquire access to the incoming presidential administration. Her ability to gain meaningful access to these powerful individuals would be incredibly valuable to the Russian government.”

Anderson, who certainly would be expected to highlight the counterintelligence risks posed by Butina, put her operation in a larger context: “Russia’s efforts targeting the United States take a myriad of forms—it is, in essence, a numbers game. Not every intelligence campaign needs to be successful for Russia to have achieved its goals.”

Her endeavor was only one of many Russian attempts to worm into the political elite of the United States. It’s hardly shocking that Moscow plots in this manner. No doubt, US intelligence also seeks in Russia and elsewhere to identify and recruit what’s known in spy jargon as “access agents,” who may or may not be witting. What’s especially relevant is that Butina’s operation—which included attempts for her and Torshin to connect with Trump during the campaign—coincided with multiple interactions between Russians or Russian cutouts and persons associated with Trump. And during this same stretch, Trump was secretly negotiating a deal for a billion-dollar project in Moscow.

Mueller’s report evaluates these Trump-Russia contacts from a law enforcement perspective: Did any of these interactions entail a criminal conspiracy by Trump or his associates related to the Russian government’s attack on the 2016 campaign? The former FBI chief found no evidence of any such illegality. But his report did not tell the public whether the counterintelligence worries raised by these contacts—did Russia manage to infiltrate or covertly influence Trump and his crew?—were valid. In the Butina case, the US government officially states the Russians were aiming to cultivate and co-opt conservatives and Republicans. In the Trump-Russia scandal, that remains a mystery.