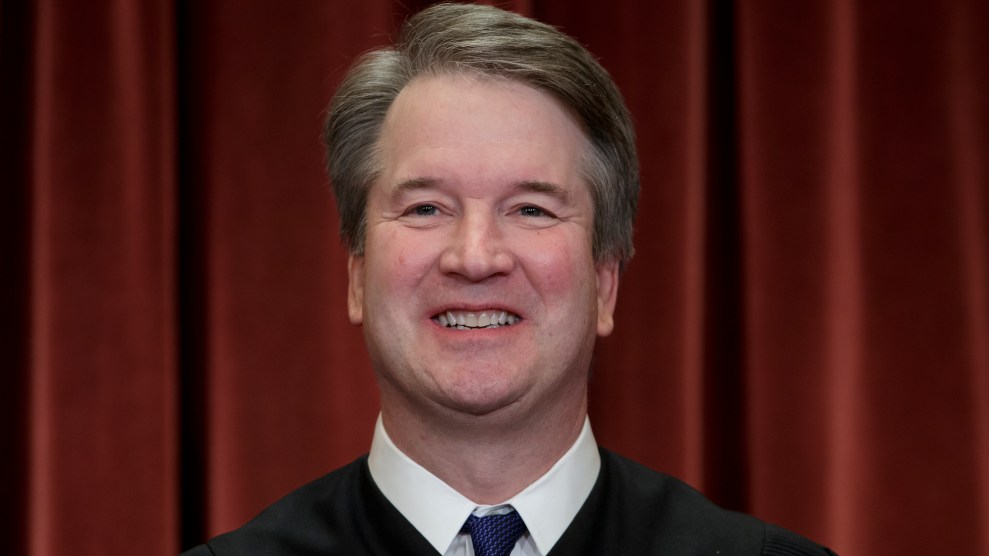 A few weeks after he was confirmed to the Supreme Court last fall, Justice Brett Kavanaugh took a victory lap to celebrate with the people who put him there. He was a featured guest at the annual Federalist Society national fundraising dinner, where the assembled conservative lawyers greeted him with a standing ovation. If anyone had hoped that Kavanaugh would try to mend fences or mitigate the impression left by his confirmation hearing that he was a hardcore GOP partisan, those hopes were largely dashed.

New York Times columnist Linda Greenhouse questioned whether his victory lap would cement Kavanaugh’s ideological commitment, not to conservative legal principals but to the agenda of the Federalist Society, which has largely taken over the role of selecting judicial nominees for the Trump administration. Kavanaugh’s dinner appearance, she wrote, smacked of “social control, the not so subtle message of the evening being: We’ve been here for you, and we expect you to be here for us. If you want to come back, don’t disappoint us.”

Now that Kavanaugh has finished his first term on the bench, it’s clear how much he’s hewed to the right and shifted the court in the way his benefactors had hoped he would. There have been a couple of surprising votes, including one that put him on the opposite side from President Donald Trump, but nothing that’s really put him at odds with the Federalist Society. Leonard Leo, the group’s vice president and friend of Kavanaugh, recently told Time approvingly, “Brett Kavanaugh has seen how unforgiving the Left can be…So Justice Kavanaugh has every incentive to basically do what he wants to do and ignore the Left.”

Kavanaugh’s predecessor, Anthony Kennedy, was a Republican appointee who was an unpredictable swing voter on significant social issues like LGBT and abortion rights, positions that drove conservatives crazy. His vote was critical to the legalization of same-sex marriage and the preservation of abortion rights. In his first term on the court, Kavanaugh has already proven that he’s no Anthony Kennedy.

In 2014, Louisiana passed a law virtually identical to the Texas one the Supreme Court would strike down in 2016. Like the Texas law, it would have closed most of the state’s abortion clinics. The lower courts blocked the Louisiana law, invoking the 2016 Supreme Court case, and in February, it landed at the Supreme Court, where Kavanaugh had taken Kennedy’s seat.

In his first term on the court, Kavanaugh has already proven that he’s no Anthony Kennedy.

During his confirmation hearing, Kavanaugh had sought to reassure senators, especially moderate Republicans like Maine’s Susan Collins, that he would respect the court’s precedent, suggesting that he considered the court’s landmark ruling in Roe v. Wade to be settled law. But when the four liberal justices, joined by Chief Justice John Roberts, voted to block the Louisiana law, Kavanaugh dissented, arguing that he would have allowed the law to take effect.

“Kavanaugh went out of his way to write this opinion that gave a very crabbed reading of abortion rights precedent,” says David Gans, civil rights director at the liberal Constitutional Accountability Center. Gans notes that Kavanaugh also voted with the conservative bloc to overturn a 40-year-old precedent in an unrelated case that Justice Stephen Breyer warned could have dangerous implications for the court’s other landmark rulings, like Roe.

Last week, in one of the biggest cases of the term, Kavanaugh voted with the conservative majority to bar federal courts from ruling on partisan gerrymandering cases. Many of these challenges to skewed maps had been invigorated because of Kennedy, who for more than a decade held out the possibility that the Supreme Court might clamp down on partisan gerrymandering. After Kennedy first said in 2004 that the court might be open to such challenges if presented with a manageable standard for assessing them, plaintiffs repeatedly tried to come up with a case that might satisfy the swing justice.

In the North Carolina case that led to last month’s Supreme Court decision, Republicans had intentionally drawn legislative districts to ensure GOP domination of 10 of the state’s 13 congressional seats, even though in 2018, the party barely won 50 percent of the statewide popular vote. Kennedy might have proven a crucial swing vote in that case. Instead, it was Kavanaugh who provided the critical fifth vote with the conservatives to entrench GOP political power. University of California Irvine law professor Rick Hasen says that by the time the gerrymandering issue was “perfectly teed up” for Kennedy, the octogenarian justice “was out of gas, more conservative, and generally ended his final term very grumpy. It is no surprise that his replacement with Kavanaugh led directly to this.”

Kavanaugh has also demonstrated his conservative bona fides on criminal justice, voting to make it easier for police officers to arrest people for insulting them, and on church-and-state issues, voting to allow a 40-foot cross to remain on public space in Maryland and to take a case that could expand the use of taxpayer-funded vouchers for private religious schools.

Kavanaugh has also raised eyebrows for recent actions that have nothing to do with his voting record. In a contentious First Amendment case involving a public access TV station, he wrote, “It is sometimes said that the bigger the government, the smaller the individual.” The aphorism struck legal blogger Michael Dorf as odd. He traced its origins through the Twitter feed of the Ayn Rand-inspired Atlas Society and concluded that it was most recently popularized by the right-wing talk radio host and YouTube star Dennis Prager. Dorf suggested that Prager was a highly unusual source for a Supreme Court reference, and evidence that Kavanaugh shares a world view “with the people who get their news and opinion from right-wing media.”

Then there’s his staffing: Kavanaugh recently hired the daughter of Yale law professor Amy Chua as a clerk for the coming term. Chua had written an op-ed in the Wall Street Journal defending him during his confirmation hearing, even as she insisted that it was not intended to help advance her daughter’s career.

But Kavanaugh’s first term has not been entirely predictable. He wrote the majority opinion in Flowers v. Mississippi, in which the court reversed the conviction of a black man on death row who had been tried six times for the same crime—each time by the same prosecutor, who had booted a total of 41 of 42 prospective black jurors from the jury pool before finally securing a death sentence. “Equal justice under law requires a criminal trial free of racial discrimination in the jury selection process,” Kavanaugh wrote for a 7-2 majority.

“We aren’t seeing anything to be optimistic about in terms of how he’ll rule in the future,” says Alliance for Justice president Nan Aron.

Kavanaugh also voted with the court’s liberals to allow an antitrust case against Apple to proceed. Most notably, in mid-June, he voted with the majority in Gamble v. United States to preserve the ability of both a state and the federal government to prosecute someone for the same crime. The case could hold implications for Trump and some of his associates prosecuted by special counsel Robert Mueller as part of his investigation into Russian meddling in the 2016 election. Trump has threatened to pardon a number of people Mueller has convicted, including his former campaign manager, Paul Manafort. Even if he does so, under current law, states like New York could still prosecute those people under their own laws. That led some liberal pundits to worry last fall that the Senate was rushing Kavanaugh’s confirmation so that he could provide the deciding vote in Gamble to ban states from prosecuting people Trump pardoned.

As it turned out, the vote on Gamble wasn’t even close—7 to 2—and Kavanaugh was in the majority that voted against Trump’s interests to uphold the centuries-old precedent, leaving liberal justice Ruth Bader Ginsburg and conservative Neil Gorsuch as the odd-couple dissenters. But on the whole, Kavanaugh has proven to be the reliably conservative justice the Federalist Society desired when it pushed Trump to nominate him, voting almost in lockstep with Chief Justice John Roberts and Justice Samuel Alito. And he’s just getting started.

The court has already accepted more than 50 cases for the coming term, and Kavanaugh will have a chance to weigh in on more of the country’s thorniest issues, including one case involving the Affordable Care Act, another that could decide the fate of “Dreamers”—the undocumented immigrants brought to the United States as children—and most likely more abortion cases. During his confirmation hearing, Kavanaugh repeatedly said that he was an optimist who lived “on the sunshine side of the mountain.” Liberal court watchers aren’t so hopeful about the outcome of those contentious cases.

“To those of us who studied his record, Brett Kavanaugh was a known quantity when he got to the Supreme Court and he’s living up to his hard-right reputation,” says Nan Aron, president of the liberal advocacy group Alliance for Justice. “Kavanaugh came to the Court with a record of hostility to health care and reproductive rights. Like his fellow Trump appointee Neil Gorsuch, he’s shown plenty of willingness to strike down longstanding precedents. So no, we aren’t seeing anything to be optimistic about in terms of how he’ll rule in the future.”