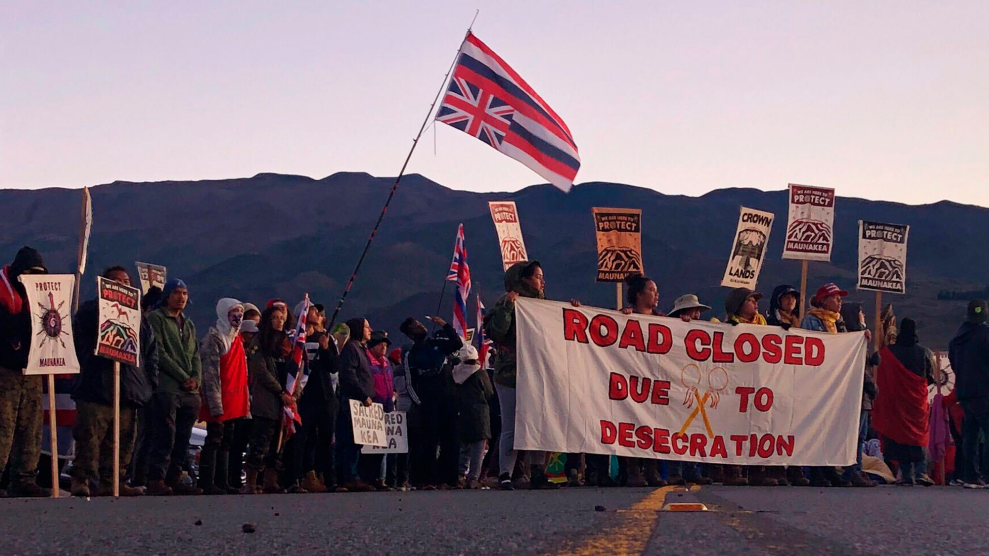 Demonstrators gather to block a road at the base of Hawai'i's tallest mountain, Mauna Kea. They fly the Hawaiian flag upside down as a protest symbol. Caleb Jones/AP Photo

Hundreds of Native Hawaiians and their supporters gathered last week at the base of Mauna Kea, the tallest mountain in the state, to block construction of a massive telescope that they say threatens sacred sites. The protests came to a head on Wednesday, when at least 30 elders calling themselves kiai’i, or “protectors,” were arrested by officers from Hawaii’s Department of Land and Natural Resources for allegedly blocking an access road that leads up the mountain where the Thirty-Meter Telescope would be built.

A heavily armed police force arrested 33 Native Hawaiian elders who were peacefully protecting our most sacred mountain from desecration. Our kūpuna are literally laying down their bodies for our environment and culture—and they must not shoulder this burden alone. #WeAreMaunaKea pic.twitter.com/4TufyNcILj

People began to congregate last Wednesday, when Gov. Ige announced that construction on the Thirty-Meter Telescope would finally begin after almost 20 years of back-and-forth between astronomers and local indigenous groups. Supporters of the project say that Mauna Kea’s exceptionally clear view of the night sky would allow the telescope to capture unprecedented views of outer space, helping scientists better understand black holes and the possibility of life on distant planets. Opponents are concerned about its ecological and spiritual impacts, since the mountain is home to rare species, including the endangered palila bird, as well as ancestral burial grounds.

Native Hawaiians have filed several lawsuits to challenge the Thirty-Meter Telescope as well as other astronomy projects already underway on Mauna Kea. In 2007, a court-ordered analysis of the environmental impacts of the ongoing projects concluded that they had caused “significant, substantial and adverse” harm to the ecosystem. In 2012, two indigenous-led groups joined in a lawsuit demanding public participation in the Mauna Kea’s management; their claims were dismissed.

A 2015 suit over the Thirty-Meter Telescope reached the Hawaiian Supreme Court and halted construction for years on the grounds that the permitting process was flawed; during that time, hundreds flocked to Mauna Kea for public demonstrations. The project is now back underway after the state Supreme Court validated its new permits last fall.

As of Friday, more than 600 astronomers had signed an open letter denouncing the arrest of elders at Mauna Kea. The letter questions whether the project’s benefits to the scientific community justify the “violation of consent” and leveraging of “state-sanctioned violence” against Natives.

Following the arrests, Governor David Ige proclaimed a state of emergency, calling on the Hawai’i National Guard to support civil authorities in enforcing state laws around the mountain so construction could move forward. The Honolulu Star-Advertiser reports that Mauna Kea organizers devoted Friday morning to preparing for a potential clash with National Guard troops, practicing human blockades. The state’s Lieutenant Governor, Josh Green, made a Facebook post on Friday to voice his opposition the National Guard’s presence at the site.

Protectors have been sleeping overnight at Mauna Kea’s base at the Pu’uhonua o Pu’uhuluhulu camp, where they’ve established a kitchen and medic tent.

Can’t post a detailed update, but we are safe and we are still here. We are organized both in terms of actually handling the camp (see attached rules) and in terms of actually organizing. Please support in whatever way you can and please PLEASE do not believe the propaganda. pic.twitter.com/mbcwgiCcN6

Protestors are nervously awaiting the arrival of the National Guard, though they say they will not be deterred. “We are here for the long haul,” elder and local hula master Mapuana de Silva tells Mother Jones via text, adding that their numbers are growing each day. “This is a strong thriving community of native Hawaiians who was to stop the desecration of this most sacred site, the highest peak in the Pacific, the mountain where our ancestors have prayed and practiced our culture long before any foreigners arrived. And where we still practice our culture with our families to this day.”

Here are more images from the occupation so far:

1,000 people descended upon #Maunakea in support of protectors against construction of #ThirtyMeterTelescope. #KuKiaʻiMauna protectors promise to remain in #KapuAloha anticipating show of force from Hawaii law enforcement. #AoleTMT https://t.co/tgiq5xnIAe pic.twitter.com/3tUyPW0b2W

Some of #Hawaii’s most distinguished & respected kumu hula have joined the #TMT protest movement on #Maunakea against the #ThirtyMeterTelescope & to leave ho’okupu (an offering) of hula for the mountain — believed to be one of Hawaii’s most sacred places https://t.co/KS26hxpw5Q pic.twitter.com/z2J5I7bDUV

there is no strength like the strength of our mana wāhine. the future is wāhine. 🔺✊🏾 #MaunaKea pic.twitter.com/uDWAjCEBYj

Honeywagon Service workers are among the many unsung heroes at Mauna Kea – so the kia’i decided to sing their mahalo to them. Never thought I’d get teary-eyed watching a guy empty out a Porta Potty and yet here we are. So many uniquely beautiful things happen here. #TMTShutdown pic.twitter.com/bsOGdxSGus