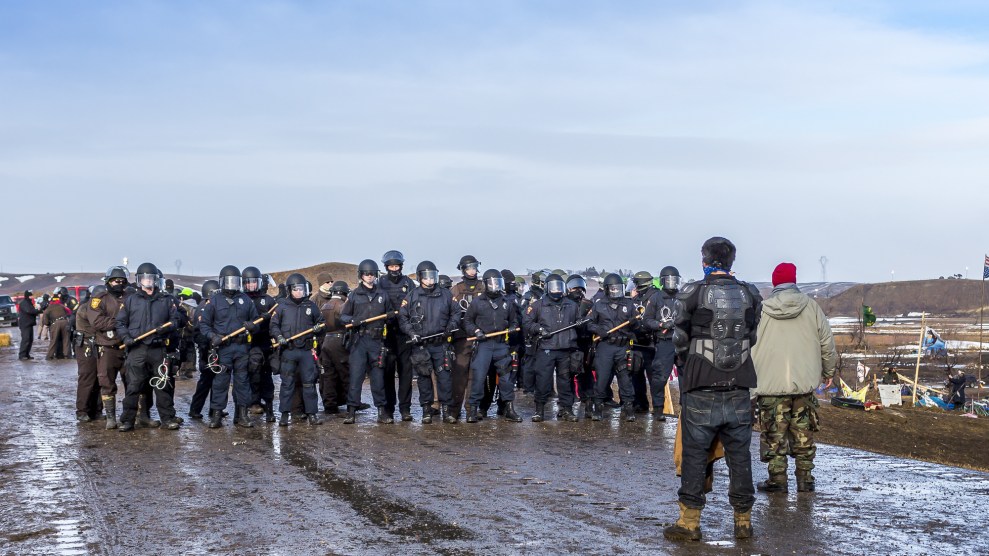 During the 2016 protests against the Dakota Access pipeline, Dallas Goldtooth became internet famous for his broadcasts from “Facebook Hill,” the one area of the prayer camps on the Standing Rock Reservation in North Dakota that had reliable cell service. Using humor honed doing sketch comedy, Goldtooth, an activist with the Indigenous Environmental Network, earned millions of views giving updates on the Native-led resistance and livestreaming incidents of police brutality. As water protectors in North Dakota used direct action to delay the pipeline’s completion for months, Goldtooth vigorously supported them.

Today, Goldtooth, who is Mdewakanton Dakota and Diné, and the IEN are gearing up to fight construction of the Keystone XL pipeline in South Dakota, which an appeals court recently green-lit. But Goldtooth would have reason to think twice before broadcasting videos like the ones he made at Standing Rock, because under a new law in neighboring South Dakota, such messages, advocates worry, could be considered “riot boosting”—and might result in heavy fines that would fund the very thing he was protesting.

According to the ACLU, which is representing Goldtooth, the IEN, and several other plaintiffs in a suit against the new law, the term “riot boosting” was invented by South Dakota legislators, who overwhelmingly passed SB 189 in March. Drafted by Gov. Kristi Noem in consultation with law enforcement officials and TC Energy, the company behind Keystone XL, the law says that anyone encouraging people to use force as part of a riot can be sued for damages, regardless of whether they were present at the riot themselves.

South Dakota’s definition of riot has not changed, nor is it atypical; criminal charges of rioting were levied by North Dakota against hundreds of protesters at Standing Rock. Encouraging a riot without participating was already a state felony, punishable by up to five years in prison and a fine of up to $10,000. What SB 189 (the “riot-boosting” act) does is expand the civil liability for those found guilty. Not just individuals, but organizations and nonprofits can now be made to pay hefty damages if convicted of encouraging a riot. But what does it mean to encourage?

“We’re unclear on exactly what kind of conduct will be penalized,” Courtney Bowie, legal director for the ACLU of South Dakota, told Mother Jones after the lawsuit’s first hearing on Wednesday. “Frankly, the judge was unclear on that too.” The ACLU is arguing that the new “riot boosting” law, and the original law against encouraging a riot, should both be “void for vagueness,” since a statute that can be enforced too broadly violates the 14th Amendment’s guarantee of due process.

“If you pay for a bus ticket for someone to go to a rally to South Dakota,” Bowie said as an example, “and at the rally, four people do something violent, now you have, under the terms of this law, paid for someone to go to this event, and you are civilly liable.” At Wednesday’s hearing, the judge speculated that the law could be used to prosecute a person who, for example, threatens a pipeline construction crew that illegally trespasses on their land.

The suit, filed with the US District Court in South Dakota,  also alleges that the “riot boosting” law will “chill” free speech and peaceful protests by creating a heavy deterrent—penalties of up to three times the cost of damages incurred—for any statement that can later be linked to behavior the state construes as violent. The state would even be incentivized to target “riot boosters,” since the fines collected could be used to fund police response to subsequent pipeline protests. In a statement announcing the legislation, which also creates a fund to collect money for law enforcement expenditures, Gov. Noem described the measure as a funding mechanism for the pipeline and said it’s meant to target “out-of-state” protesters.

No one has been fined yet, but the law is already proving effective as a deterrent. The 7th Defenders, a group of indigenous youth based on the Cheyenne River Reservation in South Dakota, recently lost their fiscal sponsor after it decided that it could not afford to be associated with a group that plans to protest Keystone XL. The Indigenous Environmental Network has stepped in to sponsor the 7th Defenders despite the high financial risk.

The Sierra Club, another plaintiff in the suit, also says they would be “hesitant” to challenge Keystone XL through protected forms of speech like protests, rallies, and online campaigns due to the high risk of costly liability.

Goldtooth said the “higher purpose” motivating his group compels them to continue using “a broad spectrum of tactics,” even if they lose this lawsuit. “My people are the people who stood up against the Dakota Access pipeline,” Goldtooth told Mother Jones. “They are going to continue to do what they need to do, and to use peaceful civil disobedience if need be.”

The case is now pending a ruling from the judge, who is considering the plaintiffs’ request for an injunction that would put the law on hold, and the defendants’ request that the case be dismissed or referred to the state Supreme Court. Other plaintiffs include the NDN Collective, a South Dakota-based organization led by Nick Tilsen (an Oglala Lakota) that works to develop, organize, and defend indigenous communities, and Dakota Rural Action, a local group of farmers and ranchers committed to protecting water.

South Dakota is one of at least a dozen states that have enacted anti-protest laws since Standing Rock. Many of these laws specifically target protests against pipelines and “critical infrastructure” projects, with sentences of up to 10 years in prison for individuals, and fines of up to $1 million for “conspiring” organizations.

North Dakota has expanded the scope of both its riot and trespass laws, and along with Arizona has created new penalties for protesters who conceal their faces. Louisiana’s critical infrastructure law, which passed last year, is currently being used to charge Anne White Hat, a Sicangu Lakota single mother, with two felonies and up to 10 years in prison for allegedly trespassing on a pipeline easement. White Hat is the lead plaintiff in a different federal court case challenging the constitutionality of the Louisiana law.

In early June, the Department of Transportation released a proposal calling for Congress to expand criminal penalties for pipeline tampering to apply to projects still under construction, with a sentence of up to 20 years in prison. Like many of the state laws, the DOT’s proposal is similar to model legislation put forth in 2017 by the American Legislative Exchange Council (ALEC).

Goldtooth continues to urge his Facebook followers—more than 123,000 people—to challenge oil infrastructure, including in Louisiana. “This is all happening in our homelands, and it’s making it illegal for us to ask for help from our own people to protect our own lands,” said Goldtooth, who is adamant that indigenous water protectors won’t be deterred. “The people on the line are gonna be there, holding the ground, like we always do. But at Standing Rock, we discovered that we need non-Native allies to stand with us. The fear is that these laws will make allies too afraid to come join us.”