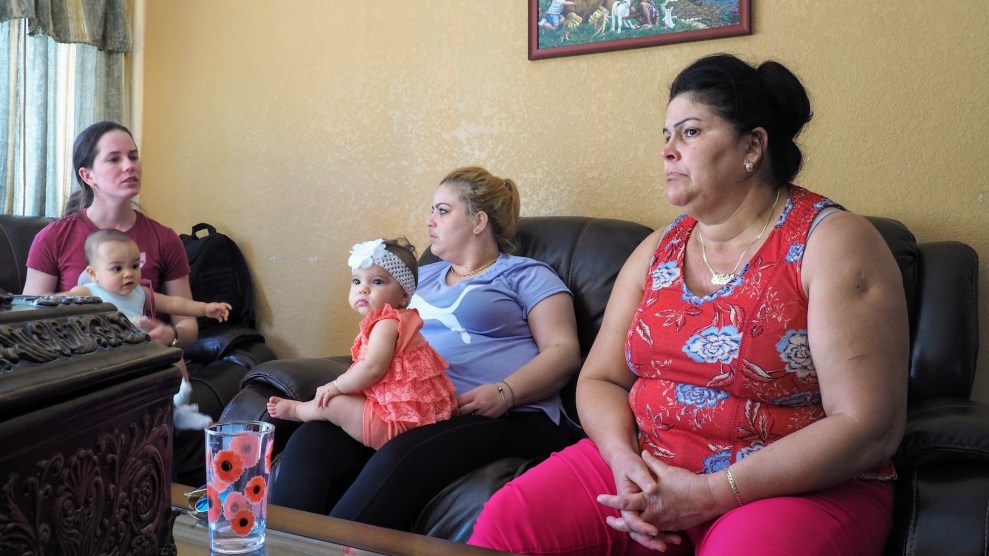 Midalis Rodriguez, right, at her home in Hialeah, Florida, in May with other Cubans whose relatives were being detained by ICE.Noah Lanard/Mother Jones

Sitting in her living room in Hialeah, Florida, Midalis Rodriguez said something I hadn’t expected to hear in America’s most overwhelmingly Cuban city: “This country is worse than Cuba.” In 2016, Hialeah residents had celebrated Fidel Castro’s death like a World Cup victory, and Rodriguez continued to express nothing but scorn for Cuba’s government at her home in May. But she was also seeing a new side of the United States now that Immigration and Customs Enforcement had detained her husband, Yoel Alonso, in Louisiana.

Rodriguez was struggling to understand how Alonso could be facing an indefinite stay at a faraway private prison after requesting asylum at the southern border in October. Some Hondurans and Nicaraguans were getting out of Louisiana prisons, Rodriguez said. Why was there this “racism” against Cubans?

Central Americans might be surprised to hear Cuban immigrants complaining of unfair treatment. Until January 2017, when Barack Obama ended the “wet foot, dry foot” policy, Cubans who set foot on US soil were released and set on the path to citizenship, a benefit provided to no other nation’s citizens. Now, after more than 50 years of privileged status under US immigration law, Cubans are starting to be treated like everybody else: jailed, pushed through harsh courts, and then deported. And Cuban Americans, including those with detained relatives, are becoming active critics of a detention regime from which they long had the luxury of being exempted.

Miami’s Cuban exile community is often portrayed as a monolith that fights for anyone opposed to the island’s government. But Rodriguez, a permanent resident who came to the United States in 2016, says Cubans trapped in the immigration system have gotten no support from legislators like Sen. Marco Rubio (R-Fla.), a son of Cuban immigrants who is more likely to be heard these days talking about the need to spare Venezuelan refugees from deportation. That has left thousands of Cubans imprisoned by ICE and their relatives to fend for themselves—so far with little success.

The lack of action from Cuban American legislators in Florida is less surprising than it may seem. Cubans who left the island immediately after Castro ousted the US-backed dictator Fulgencio Batista in 1959 have long been skeptical of more recent arrivals, who were less likely to be intensely anti-Castro. In Joan Didion’s 1987 book Miami, one of those early Cubans explained: “The first group left because they were Batistianos…The second group left because they were losing their property…Then the people started coming who were unhappy because they couldn’t get toothpaste.”

Michael Bustamante, a history professor at Florida International University’s Cuban Research Institute who is writing a book about historical memory of the revolution on and off the island, says the skepticism only grew after 2013, when Cuba made it much easier for its citizens to leave and return. The change allowed Cubans to earn dollars in the United States, Bustamante explains, then use that money to pay for things like surgeries or homes in Cuba. The shift led to a growing sense among Cuban exiles that the new arrivals, who were often working in low-paying jobs serving older Cuban Americans, were actually propping up the regime they had hoped to bring down with a trade embargo. A 2018 poll from Florida International University showed that 64 percent of Cubans who came to the United States before 1980 supported ending “wet foot, dry foot,” compared to only 40 percent of those who came since 1995.

Despite the end of “wet foot, dry foot,” Cubans still enjoy unique benefits as a result of the 1966 Cuban Adjustment Act, which makes Cubans eligible for green cards one year after being released into the United States by immigration authorities. Other people who arrive without visas, by contrast, have to show they qualify for asylum or another form of protection if they hope to remain in the country legally.

The catch for Cuban asylum seekers is that the clock doesn’t start ticking until they are released from detention. For people like Alonso, that may never happen. Alonso said that he fled to the Texas border in September after being beaten by Cuban police for refusing to participate in political activities. His medicine for gout was confiscated when he was transferred to a private immigration prison in Louisiana in November, he said, and he started using a wheelchair one month later. Soon after, ICE declined to let him out of detention on parole.

Yerandy Valdes Ruiz, another Cuban detained in Louisiana, likewise complains of inadequate medical care, saying he didn’t receive enough insulin injections to treat his diabetes while he was detained at ICE’s Pine Prairie detention center. He says it sometimes caused his blood sugar to rise above 500 milligrams per deciliter, a level so high that it can lead to a diabetic coma. When I spoke to Valdes last month, he said a guard had recently thrown out photos of his family. In protest, Valdes sewed his mouth shut with a needle and thread. He says a prison official responded by calling him worthless and—here he switched briefly to English—a “motherfucker.” Valdes has the words “Cuba is a prison of the living dead” tattooed across his forearm. In December, he lost his asylum claim before a judge who has rejected hundreds of asylum seekers in a row.

Immigrants from Mexico, Central America, and around the world have long criticized the immigration detention system for poor medical care and mistreatment by guards. But being subjected to those conditions comes as a shock to Cubans who had reason to believe the United States lived up to its rhetoric about welcoming immigrants. “Where are the human rights?” Rodriguez asked. “There are none here. It’s a lie.” She had concluded that America was “Cuba with money,” a place where you could make a decent life while suffering similar injustices to the ones she tried to leave behind.

The central problem for Cuban asylum seekers is that the end of “wet foot, dry foot” was followed by another change: The government has basically stopped releasing asylum seekers whose cases are pending. The shift has been particularly dramatic in Louisiana, where hundreds of Cubans are ending up. Between 2016 and 2018, ICE’s regional office in New Orleans went from granting parole to 75 percent of people in the region to just 1.5 percent, the lowest rate in the country. The Southern Poverty Law Center and American Civil Liberties Union of Louisiana are now suing to force ICE to follow its own parole policy by releasing detainees who don’t pose a threat to public safety or a flight risk.

Last October, nearly 30 Cubans detained in Louisiana signed a manifesto to protest their ongoing confinement. They stressed that they weren’t economic migrants in search of the “American Dream,” but victims of an oppressive regime. They accused US officials of having a “discriminatory hatred of their Cuban nationality.” In late March, Cubans and other asylum seekers launched a hunger strike at the for-profit River Correctional Center in Louisiana to protest the parole denials. Cubans suspected of organizing the protests have been punished with solitary confinement.

It isn’t the first time Cubans have protested mistreatment in Louisiana. Following the 1980 Mariel boatlift that brought 125,000 Cubans to Florida, about 2,500 of the Marielitos who had committed crimes in Cuba or after arriving in the United States were subjected to indefinite detention. In 1987, more than 1,000 of them took over a Louisiana detention center, seizing 28 hostages and burning down four buildings. They backed down after forcing the attorney general to temporarily halt deportations and provide them with parole hearings. At a congressional hearing the next year, the civil rights icon Rep. John Lewis (D-Ga.) blamed the government for the riot and a similar one in Atlanta. “These individuals were picked up by the Immigration and Naturalization Service and put in indefinite detention with no hope of due process or parole,” Lewis said, adding that the ordeal would “be remembered as a mockery on our system of justice.”

After the riot, many Cuban Americans directed their outrage in the opposite direction: toward the rioters, who they felt gave their community a bad name. “They are assassins, criminals, no doubt,” said a Cuban American who had served other Marielitos free meals at his Los Angeles restaurant. “The government here has been very benevolent. I would put them all in a boat and dump ’em near Cuba, so those who can swim can get back, and the rest can drown.”

Today, the Cubans in detention are asylum seekers, not criminals. But that hasn’t led Rubio or other Cuban elites to advocate publicly on behalf of them or their relatives. Rodriguez summed it up bluntly: “The Cubans here are worthless.” The Venezuelans, fleeing a regime more oppressive than Cuba’s, have “the whole world” behind them, she says. “Us? Nobody.”

Part of the problem, Bustamante says, is that advocating for Cubans in detention would likely require Cuban Americans who have been in the country for decades to stand in solidarity with migrants from other nations, something they’ve traditionally been reticent to do. “There’s a deep strain of Cuban exceptionalism that transcends politics, ideology, generation,” he explains.

He adds, “I think there’s a real ethical imperative that’s being missed, which is for Cuban Americans to remember that—not legally so…but metaphorically so—they were refugees once. My grandparents were refugees once. And so I find it unconscionable Miami is not one of the major anchors of advocacy for a more just immigration system in this country.”