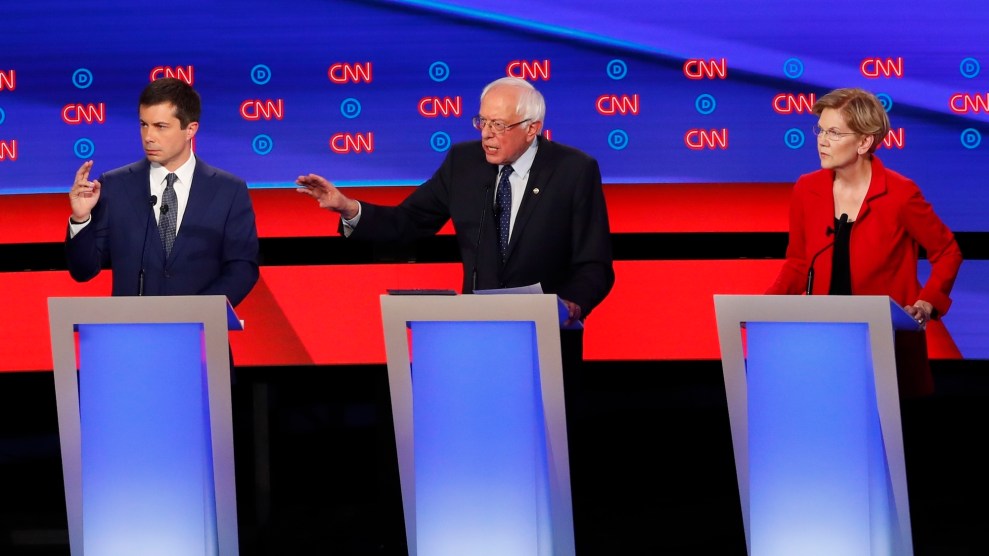 The Democratic party’s progressive base watched two of its top-tier candidates, Sens. Bernie Sanders (Vt.) and Elizabeth Warren (Mass.), spar with eight other 2020 hopefuls on CNN’s debate stage on Tuesday night. According to a straw poll conducted by Indivisible, the national progressive grassroots organization founded in the wake of Donald Trump’s 2016 victory that has served as a pillar of the “resistance” movement against him ever since, Warren impressed that base the most.

The results come from a flash poll Indivisible conducted via text message at the conclusion of Tuesday night’s debate. It asked thousands of its members—more than 1 million volunteers activated after Trump’s 2016 victory who worked to flip House seats during the 2018 midterms—which candidate they’d support based on their debate performance; 52 percent said they were most impressed with Warren. Nearly 5,000 members across all 50 states responded immediately after the debate.

Warren’s standing in Tuesday night’s poll nearly matched the reception she received from Indivisible members during the first Democratic debates in Miami last month. Then, Warren faced off against former Housing and Urban Development Secretary Julián Castro and New Jersey Senator Cory Booker, who came in second and third, respectively, in Indivisible’s poll.

Warren’s major moment came when she went head-to-head with former Maryland congressman John Delaney over whether some of the Democratic party’s most ambitious proposals, like Medicare for All and the Green New Deal, were unrealistic and pushed the party too far left. “I don’t understand why anybody goes to all the trouble of running for president of the United States just to talk about what we really can’t do and shouldn’t fight for,” Warren said to Delaney, a millionaire businessman who is largely self-funding his campaign for the presidency.

Wow. This was the biggest applause line of the night. @ewarren: “I don’t understand why anybody goes to all the trouble of running for president of the United States just to talk about what we really can’t do and shouldn’t fight for. I don’t get it.” https://t.co/FOhzc4Xcyw pic.twitter.com/JlPRSIdmTz

South Bend Mayor Pete Buttigieg came in second in the straw poll with 19 percent of the vote. He earned praise for his analysis that Republicans would label Democrats as “crazy socialists” regardless of the proposals they put forward. “So let’s just stand up for the right policy,” he said.

Sanders came in third, earning only 13 percent of votes from those surveyed.

This straw poll, like all others, is far from scientific. But Indivisible’s members represent a key demographic for the Democratic candidate competing in the 2020 campaign. Its members skew female, and while certainly liberal, they aren’t far-left. Their chief motivation is removing President Trump from office, not conducting progressive purity tests.

María Urbina, Indivisible’s national political director, says that the candidates’ focus on progressive policies—Medicare for All in particular—proved that liberal stances have strong salience among the Democratic electorate. “Senator Warren, Mayor Buttigieg, and Senator Sanders used the stage to push for big ideas and demonstrate why the candidates spouting Republican talking points aren’t being serious about achieving real change,” Urbina says. “Where some expected tonight to be a cage match between Warren and Sanders, it was ultimately a lesson in how progressive ideas about big structural change are the only way to beat Donald Trump.”

The group will conduct another flash poll after Wednesday night’s debate, which will feature another 10 Democratic candidates, including frontrunners Sen. Kamala Harris (Calif.) and former vice president Joe Biden. Mother Jones will have those results, as well.