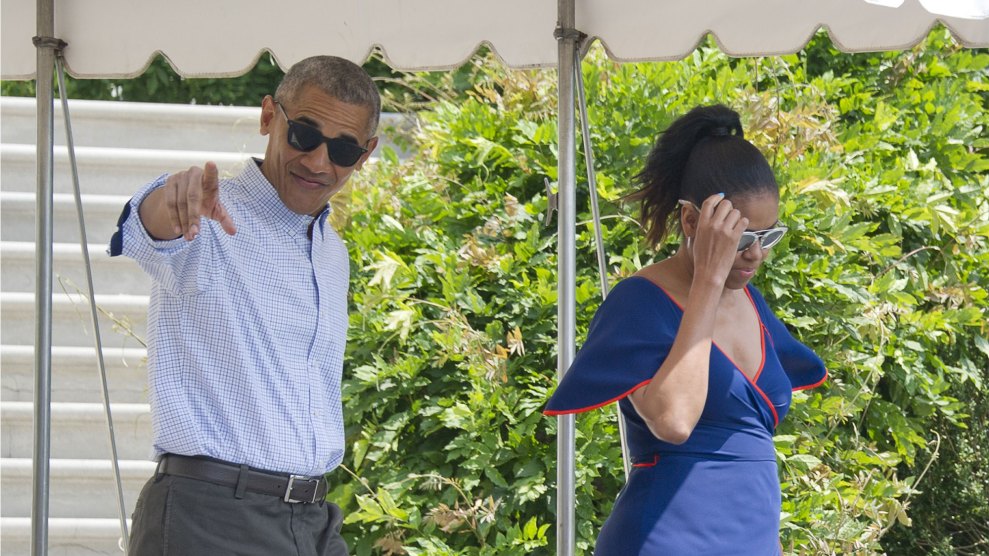 While the world feels upside down, we all need a moment to pause and see to what Barack and Michelle are listening to—and to see how much our own playlists and coolness stack up. The former president tweeted a summer playlist on Saturday, a list of 44 songs (a nod to Obama being 44th president of the United States). It includes a wide variety of genres and moods, from Stevie Wonder and the ’60s classic “Brown Eyed Girl” to one of the biggest songs of 2019, Lil Nas X’s “Old Town Road,” and “Too Good” by Drake featuring Rihanna.

Some of the artists freaked out in response—and rightly so, because being on the Obama’s radar is pretty awesome.

Here are a few of the best reactions:

1. The feel good song “Juice” from Mother Jones favorite Lizzo was #6 on the list and coincidentally, minutes before she knew that, she had tweeted about having proudly voted for Obama.

Later when someone tweeted at Lizzo saying, “‘Juice’ is No. 6 — someone check on Lizzo,” she responded with the most excited tweet yet from an artist featured on the list: “I AM NOT OK!!!!!!!!!!”

I TWEETED THIS AT 10:26AM AND ONE HOUR LATER PRESIDENT @BarackObama TWEETED ABOUT ME!!!

2. Pop favorite Maggie Rogers posted a selfie on Instagram screaming a very high pitch “Oh my God!” and writing that she was interrupting her vacation to post about the news that she was on Obama’s list with her single “Burning.”

3. Reggaeton superstar J. Balvin posted an Instagram story with an image of the list and excited gifs of him and Rosalia who are featured for their single “Con Altura.”

4. Lil NasX tweeted a photoshopped image of Obama’s head on his body, celebrating the former president for putting “Old Town Road” as #40.

Meeting President Obama is on my bucket list , but this will most definitely work for now 🙏🏿 pic.twitter.com/kSexOWkIKk

Obama’s list was just a “sampling of what Michelle and I have been listening to,” he wrote. “Some new, some old, some fast some slow.” And of course it wouldn’t be an Obama playlist without his friends Beyoncé and Jay-Z making an appearance more than once.

With summer winding down, here’s a sampling of what Michelle and I have been listening to — some new, some old, some fast, some slow. Hope you enjoy. pic.twitter.com/BS5ri1lvxz