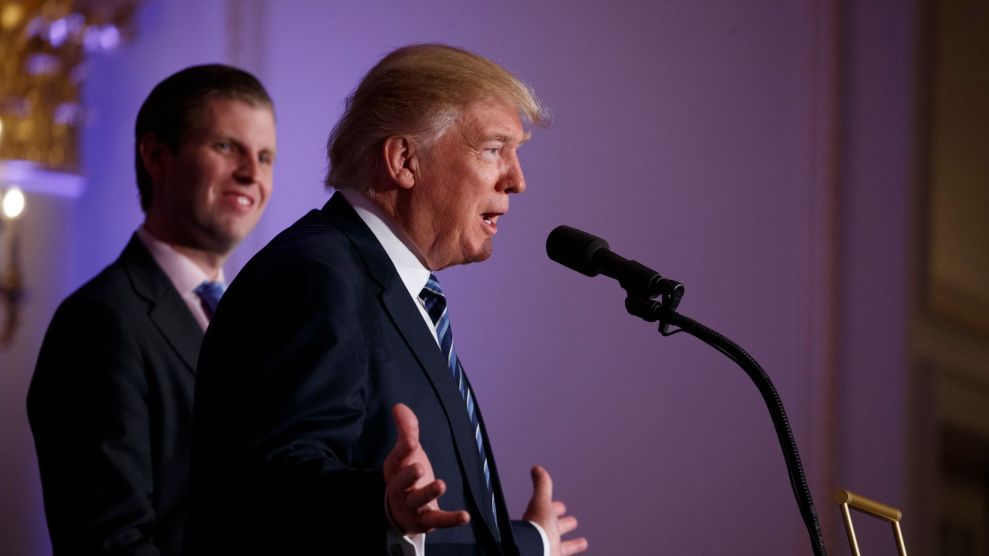 Donald Trump and his son, Eric, at the 2016 grand opening of the Trump International Hotel in Washington, DCEvan Vucci/AP

In recent months, Donald Trump has repeatedly attacked the Federal Reserve and its chairperson, Jerome Powell, for setting interest rates higher than Trump would like. “The only problem we have is Jay Powell and the Fed,” the president tweeted on Wednesday. “Big U.S. growth if he does the right thing, BIG CUT – but don’t count on him! So far he has called it wrong, and only let us down.” On Friday, he went further, declaring, “My only question is, who is our bigger enemy, Jay Powell or Chairman Xi?”

Trump pretty clearly sees recent economic turmoil—much of which he has caused by provoking a trade war with China—as a major threat to his reelection bid. He’s hoping the Fed can juice the economy enough for him to win a second term. But as the Washington Post reported Saturday, Trump may have an ulterior motive. It turns out that his businesses could save millions of dollars in interest payments if rates fall:

In the five years before he became president, Trump borrowed more than $360 million via four loans from Deutsche Bank for his hotels in Washington, D.C., and Chicago, as well his 643-room Doral golf resort in South Florida.

The payments on all four properties vary with interest rate changes, according to Trump’s official financial disclosures. That means he has already benefited from falling interest rates that were spurred in part by a cut the Federal Reserve announced in July, the first in more than a decade—and his payments could drop by millions of dollars more annually if the central bank grants Trump’s wish and further lowers short-term rates, experts said.

The central bank’s benchmark rate is one factor in determining interest owed on variable-rate loans, the kind the president has on his properties. Mortgage rates have also been driven down because of the trade war with China and anxieties about global growth.

When Trump became president, he refused to divest from his vast array of business ventures—despite the obvious conflicts of interest they pose. His hotels and clubs have continued raking in money from foreign officials (though the Trump Organization says it donates these profits), and he’s threatened to impose tariffs on wine imports that compete with his winery. Now he stands to benefit from bullying the Federal Reserve.