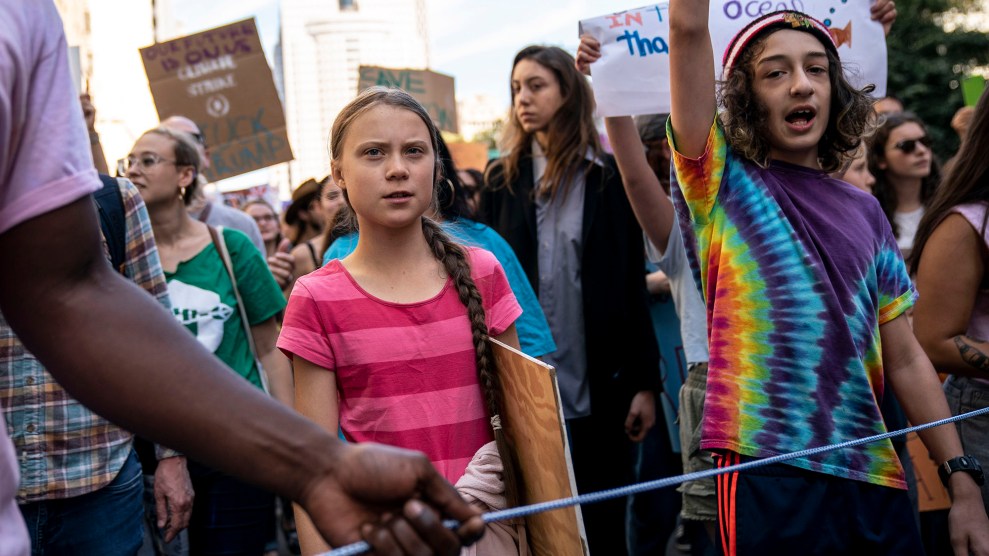 “You are still not mature enough to tell it like it is,” Thunberg said, her voice shaking. “You are failing us, but the young people are starting to understand your betrayal. The eyes of all future generations are upon you, and if you choose to fail us, I say, we will never forgive you.”

On Friday, millions of people around the world participated in the Global Climate Strike to protest governments failing to respond to climate change. Thunberg pioneered the school climate strike movement when she began protesting outside the Swedish parliament with a sign that read Skolstrejk för klimatet (school strike for the climate). Now, students around the world skip school on Fridays to protest climate change, driven by the belief that education will be meaningless in an uninhabitable world.

Last week, in lieu of testifying before Congress, Thunberg handed lawmakers a copy of the 2018 report by the UN Intergovernmental Panel on Climate Change about the effects of global warming of 1.5 degrees Celsius.

The World Meteorological Association reported Sunday that the five-year period from 2015 to 2019 was the warmest on record, averaging 1.1 degrees Celsius above pre-industrial temperatures.

“We will not let you get away with this,” Thunberg said. “Right here, right now, is where we draw the line.”

.@gretathunberg just put world leaders in their place with her testimony to the UN: "You are still not mature enough to tell it like it is." Ouch. pic.twitter.com/dOODYWiEhb