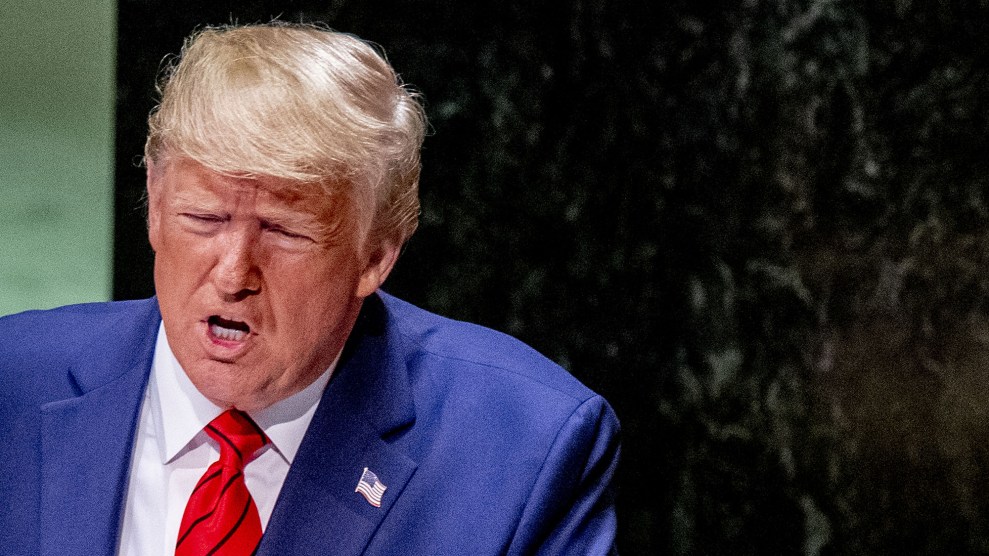 As we all now know, the July 25 phone call between US President Donald Trump and Ukrainian President Volodymyr Zelensky helped push a member of the intelligence community to file a whistleblower complaint, which now sits at the middle of the quickly evolving Trump-Ukraine scandal and Democrats’ formal impeachment inquiry. We also know that, as the New York Times reported this morning, the director of national intelligence and the inspector general of the intelligence community referred the complaint to the Department of Justice for a possible criminal investigation. At issue is Trump’s request that Zelensky investigate former Vice President Joe Biden’s role in the firing of a prosecutor in Ukraine. The non-verbatim memo of the call, which the White House released Wednesday, plainly shows this ask.

But as the Times reported, the Department of Justice did not move ahead with the complaint:

The department’s criminal division reviewed the matters and concluded that there was no basis for a criminal investigation into Mr. Trump’s behavior. Law enforcement officials determined that the reconstructed transcript of the call did not show that Mr. Trump had violated campaign finance laws by soliciting from a foreign national a contribution, donation or thing of value.

So the Justice Department, for undisclosed reasons, declined to investigate the issue, even though Trump’s request of Zelensky was likely a crime. Federal campaign finance law prohibits anyone from soliciting any “thing of value” from a foreign national. And while the Justice Department seems to disagree, many experts believe that dirt on a political rival counts as a thing of value.

“That is clearly asking a foreign national to provide something of value to his campaign and that’s illegal under federal law.”

“There’s very clear evidence, as reflected in the memo of the call, that President Trump specifically asked the president of Ukraine to help in the process of digging up dirt on Joe Biden,” says Elliot Mincberg, a former chief counsel for oversight and investigations of the House Judiciary Committee, who is now a senior fellow at a liberal advocacy group People for the American Way. “That is clearly asking a foreign national to provide something of value to his campaign and that’s illegal under federal law.”

This feels something like deja vu. Donald Trump Jr. also welcomed a “thing of value” from a foreign national in 2016. When he received an email from an acquaintance, Rob Goldstone, dangling that the “Crown prosecutor of Russia” had “offered to provide the Trump campaign with some official documents and information that would incriminate Hillary,” Trump Jr. replied, “If it’s what you say I love it.” He subsequently met with the prosecutor in Trump Tower.

This episode presented special counsel Robert Mueller with the same question Justice Department lawyers just considered with President Trump. Mueller declined to bring campaign finance charges against Trump Jr. for multiple reasons, but unlike the Justice Department’s conclusions on President Trump’s ask of the Ukrainian president, Mueller did acknowledge that opposition research on a political opponent may be a “thing of value” under the law. “A campaign can be assisted not only by the provision of funds, but also by the provision of derogatory information about an opponent,” Mueller explained in his report. “Political campaigns frequently conduct and pay for opposition research.”

“The best legal argument is that Trump committed a campaign finance crime if he solicited dirt on Biden and his son, as appears to be the case, regardless of whether there was any quid pro quo,” election law expert Rick Hasen wrote at Slate. Still, Mueller’s refusal to prosecute the son may have emboldened the father to repeat the same campaign finance crime—and made it harder for the Justice Department to prosecute it.

The decision by the Justice Department to dismiss the referral will likely come under scrutiny from Congress as the scandal morphs into one featuring the Justice Department and Attorney General William Barr. On the July 25 call, Trump mentioned multiple times that he would have Barr personally call Zelensky about investigations Trump wanted Ukraine to undertake. Yet Barr has not recused himself from the possible criminal probe arising from this call, and it’s unknown at this point if he had anything to do with the decision not to investigate it. The Justice Department denies that Barr spoke with Zelensky. The Justice Department had also been instrumental in preventing the release of the whistleblower complaint underlying the current scandal to Congress, making Barr a major obstacle to shedding more light on what actually happened between the Trump administration, Trump’s allies, and the government of Ukraine. (The whistleblower complaint was finally released Wednesday to the House and Senate Intelligence Committees.) While there are a lot of unknowns, the outlines of the problems for Barr are clear: His agency has kept the details of the scandal from Congress in likely violation of the law, and it declined to investigate a possible crime that Barr himself may be a witness to or implicated in.

Mueller’s refusal to prosecute the son may have emboldened the father to repeat the same campaign finance crime—and made it harder for the Justice Department to prosecute it.

There’s also another reason the Justice Department may have ditched its investigation: Even if it concluded that Trump had broken the law in his call with Zelensky, a sitting president cannot be indicted. But it’s important to remember Trump isn’t the only person possibly implicated in this potential crime. The memo about the July 25 call shows Rudy Giuliani’s involvement in helping Ukraine deliver dirt on Biden. Trump also noted on the call that Barr would get involved. “Rudy Giuliani could be prosecuted for any crimes he’s committed,” campaign finance expert Paul Ryan wrote this week at the legal blog Just Security. Anyone else involved in extracting opposition research from Ukraine in this scheme could as well. Don’t forget that Michael Cohen is currently serving jail time for campaign finance violations that allegedly involved the participation of the president.

Ultimately, the decision to impeach Trump does not turn on whether he violated federal law. The threshold for impeachment is “high crimes and misdemeanors”—a phrase that at the time the Constitution was written referred to, as Alexander Hamilton put it, “the abuse or violation of some public trust.” But as Trump and his allies launch a public relations campaign to exonerate the president in the Ukraine affair, stating that nothing improper occurred, lawmakers considering impeachment might find it helpful to remember that the law pretty clearly states otherwise.