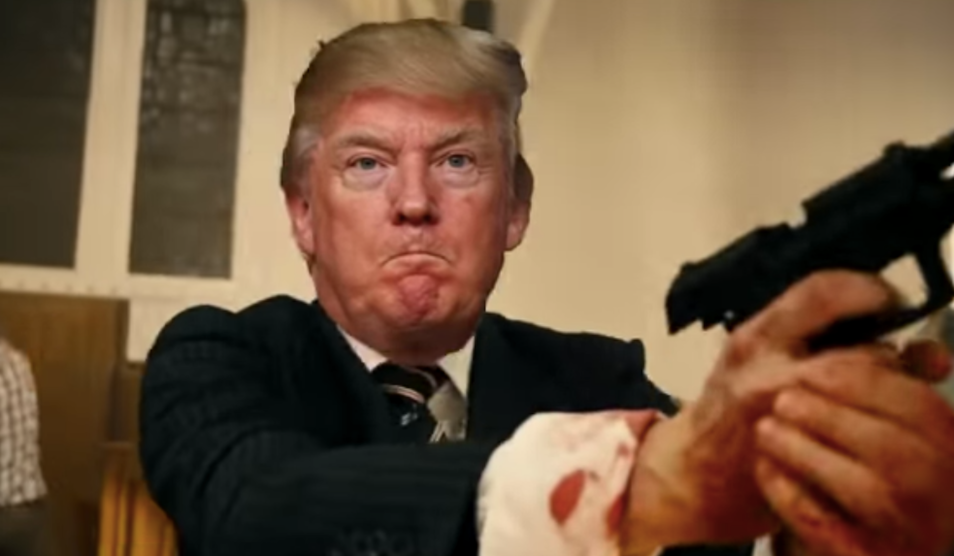 A gruesome video depicting President Donald Trump shooting and slaying members of the media, as well as his political opponents, was played at a pro-Trump political gathering hosted at a Florida resort owned by the president this weekend.

Scenes from the video, which parodies the 2014 film Kingsman: The Secret Service, shows a fake Trump indiscriminately opening fire inside the “Church of Fake News.” The church’s parishioners are portrayed as news outlets, including CNN, Buzzfeed, Politico, CBS, the Washington Post. A string of prominent critics of the president—Sen. Bernie Sanders, Rep. Maxine Waters, the late Sen. John McCain, Rosie O’Donnell—are also featured as victims in the massacre. At one moment, Trump is depicted stabbing Hillary Clinton in the throat with a gun.

The airing of the violent images, which appear to be the work of a YouTube channel dedicated to “pissing off liberals,” come as the latest example of the president’s supporters embracing his increasingly extreme attacks against the media and political rivals. Outrage over the video spread quickly:

Waiting for Donald Trump to condemn the video of him committing mass murder that was shown at his resort to his supporters, and to apologize to the families of those targeted. #trumpvideo https://t.co/U4M2ukY5sE

Reports describing a violent video played at a Trump Campaign event in which images of reporters & @JohnMcCain are being slain by Pres Trump violate every norm our society expects from its leaders& the institutions that bare their names. I stand w/ @whca in registering my outrage

“That video was not produced by the campaign, and we do not condone violence,” Tim Murtaugh, a spokesman for Trump’s re-election campaign, told the New York Times, which first reported the video’s airing on Sunday.

“We find it shocking that the New York Times would not report on any of the sanctioned events in the article,” Alex Phillips, an organizer for the event, posted on the conference’s website. “Including our panel conversation LITERALLY condemning political violence while claiming to be upset over a meme that was not sanctioned, shown on stage, or approved.”

As Mother Jones reported last week, the American Priority conference was relocated this year to Trump National Doral Miami Golf Club in Florida after a disappointing inaugural event in DC last year. Donald Trump Jr. and Sarah Huckabee Sanders were among the high profile guests to speak at the three-day conference.