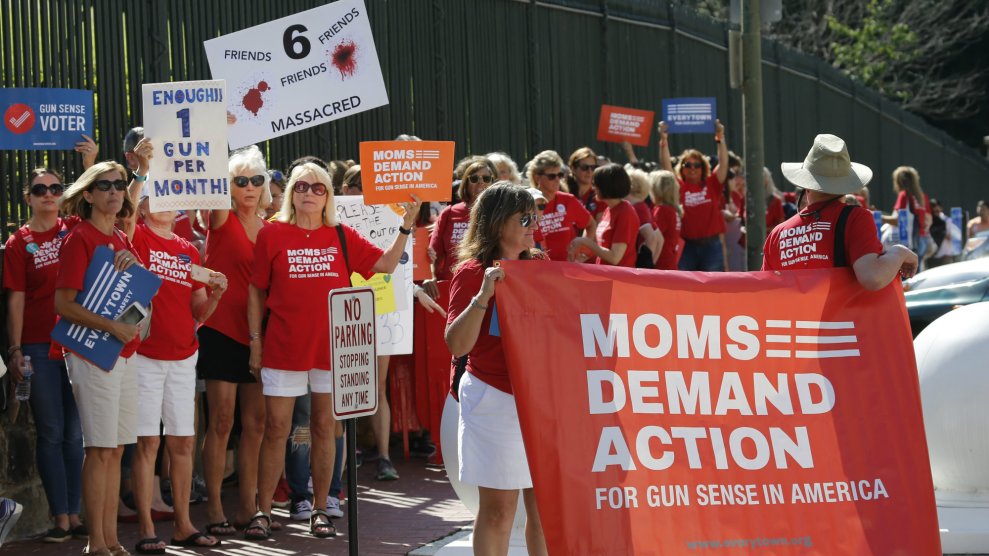 The day after a disgruntled city employee killed 12 people inside the Virginia Beach Municipal Center, Karen Havekost visited Missy Cotter Smasal’s campaign office and told her what had happened. Havekost recalled walking out of the bathroom and seeing the gunman at the other end of the hallway. A co-worker turned to her and yelled, ‘GO!’ and she was able to run out of the building, unharmed. “She told us the story and we all were just in tears,” Cotter Smasal says.

Nearly four months later, Havekost tells the same story in a television campaign ad for Cotter Smasal, who is running for the state Senate seat in the district of the Virginia Beach shooting. Virginia holds its state elections in odd number years, and with just two weeks to go until Election Day the debate over strengthening gun control laws has emerged as the leading issue for voters. That’s especially true in the 8th district where Cotter Smasal, a former Navy officer, is locked in a close race with Bill DeSteph, the district’s incumbent Republican state senator who’s also a Navy veteran, as well as a gun collector and licensed firearms dealer with a cozy relationship with the National Rifle Association.

Many eyes are already glued to Virginia’s state elections, which are drawing unprecedented national attention as the state’s GOP fights to maintain its razor-thin majority control of both the House of Delegates and Senate. But after the May 31 shooting, this tight Virginia Beach race has become a bellwether not just for the state elections, but a look into how gun control could play out in the 2020 presidential race.

Cotter Smasal first became interested in local politics in 2017, when her daughter started at a public school and she learned that none of the local schools locked their entrance doors. “One morning I walked into the school and there’s no adults in sight, no one knows who’s in the building,” she recalls. After that, she complained to the school’s administrators and principal, who rebuffed her concerns and assured her that “everything is safe.” So she started a petition and quickly gathered 2,500 signatures asking the school board to start locking school doors and vetting visitors before they entered. It took a few months, but the petition was successful and schools across the city started requiring locked doors.

Cotter Smasal became interested in running for office after the mass shooting at Marjory Stoneman Douglas High School in Parkland, Florida in 2018. For more than 10 years, Cotter Smasal owned and operated a Rita’s Italian Ice in Virginia Beach and employed many teenagers. After Parkland, they would come to work and talk about the school shooting drills they had to regularly practice. One incident, she remembers, really inspired her to run for office: A girl came into work shaken, recounting how a fire alarm went off in school that day and her teacher told the class that they had to stay in the room until they were sure it was a real fire and not a shooter. “I was thinking, ‘I can’t believe this is the stuff that we’re doing, we’re letting this happen to these kids,’” Cotter Smasal recalls. “And I knew that we had a pretty extreme state senator on the issue who would not pick up the cause.” She says passing gun control laws such as universal background checks and red flag laws, are an “urgent, critical issue” for Virginia.

If history is any indication, DeSteph should be cruising into reelection. He was elected in 2015 with nearly 60 percent of the vote, and is the latest in a long line of Republicans who have represented Virginia Beach in the Senate. According to the Virginia Public Access Project—a nonprofit, nonpartisan Virginia politics and data organization—his district swings Republican by about 30 percent. But after the Virginia Beach shooting, the push to strengthen gun control laws in the state drew bipartisan support among voters, according to public polling.

“They want action,” says Cotter Smasal. “I’m hearing it across the board from people who identify as Republicans and Democrats.” At the end of her campaign ad, which has caused a bit of a stir in the district, Havekost says that after the May 31 shooting she “asked Bill DeSteph to do something so this doesn’t happen again,” and then explains how he, along with other GOP members of the state’s legislature, maneuvered to end a special session convened to pass gun control laws without passing any legislation. In response to the shooting, Virginia Gov. Ralph Northam called for a special session of the state’s General Assembly specifically to consider and pass a package of gun control bills, including universal background checks and red flag laws—two bills Cotter Smasal supports. But the session ended after just 90 minutes, when the GOP majority voted to adjourn without passing any bills. Days before, DeSteph attended a closed door town hall meeting hosted by the NRA in Virginia Beach to discuss the upcoming special session.

DeSteph did not take Cotter Smasal’s ad lightly, and quickly fired back with his own ad calling hers “shameful” and accusing her of using the Virginia Beach tragedy “for her political gain” and claiming that he “filed 27 pieces of legislation” after the shooting. None of those bills sought to change the state’s gun laws but instead called for treating gun violence as a mental health issue by calling for a study, as well as raising the penalties for violating the state’s existing gun laws.

She says his ad is nothing but an “attack” on a survivor of the Virginia Beach shooting. “I think that his attack just demonstrates what we always see from the gun lobby, they try to bully people into being silent, and silence only perpetuates more gun violence and more mass shootings,” she says.