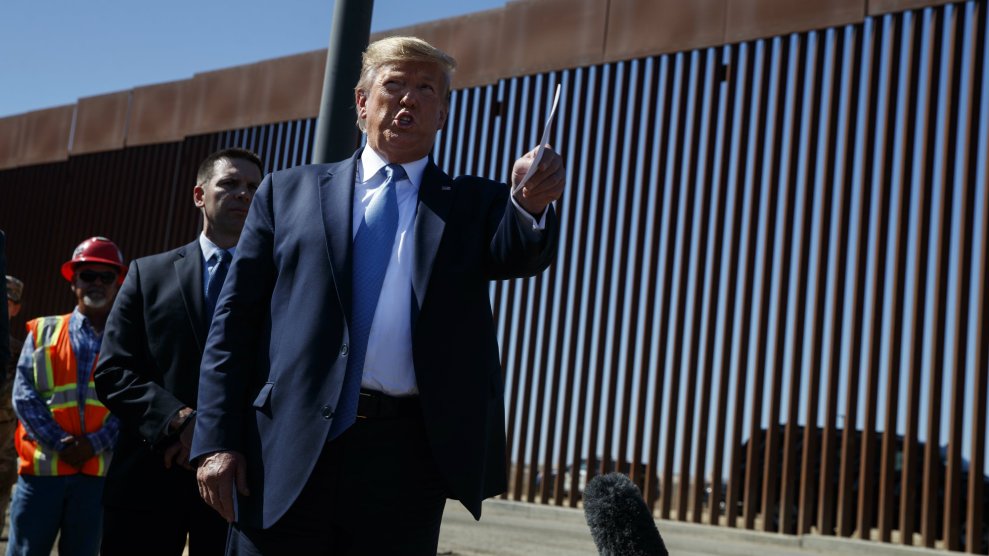 On Tuesday evening, as 12 Democratic presidential hopefuls debated policy ideas about healthcare, gun control measures, and protecting reproductive rights, President Donald Trump once again vetoed legislation that would end his declaration of a national emergency at the southern border and prevent him from building his wall.

It’s the sixth veto of Trump’s presidency and comes seven months after he first vetoed a similar measure in March, which had been passed by the Senate in a 59-41 vote, with twelve Republicans siding with Democrats. This bill would have halted the president’s emergency declaration to funnel $3.6 billion in Defense Department funding to build more sections of his wall at the Southern border; the bill the president vetoed last night was nearly identical. “In short, the situation on our southern border remains a national emergency, and our Armed Forces are still needed to help confront it,” Trump wrote in his message to the Senate Tuesday just after 9 p.m., an hour into the Democratic debate. Congress could override the President’s veto with a two-thirds majority of votes in the Senate, but that is unlikely to occur, the New York Times reports.

Building a wall at the southern border has long been a drawn-out battle at the center of Trump’s aggressive and contentious crackdown on immigration reform. And Democrats have fought tooth and nail throughout Trump’s presidency to block his efforts to succeed in that plan, as well as to put a halt to his detention of refugees and his controversial family separation policy.

But during Tuesday’s three-hour Democratic presidential debate, there wasn’t a single question about immigration. Even some of the candidates later expressed disappointment with how this subject, as well as ones on climate change and LBGTQ, were not part of the discussion.

Not one question about the climate crisis.

Not one question about LGBTQ+ rights.

Not one question about immigration.

These issues are too important to ignore. #DemDebate

Three hours and no questions tonight about climate, housing, or immigration.

Climate change is an existential threat. America has a housing crisis. Children are still in cages at our border.