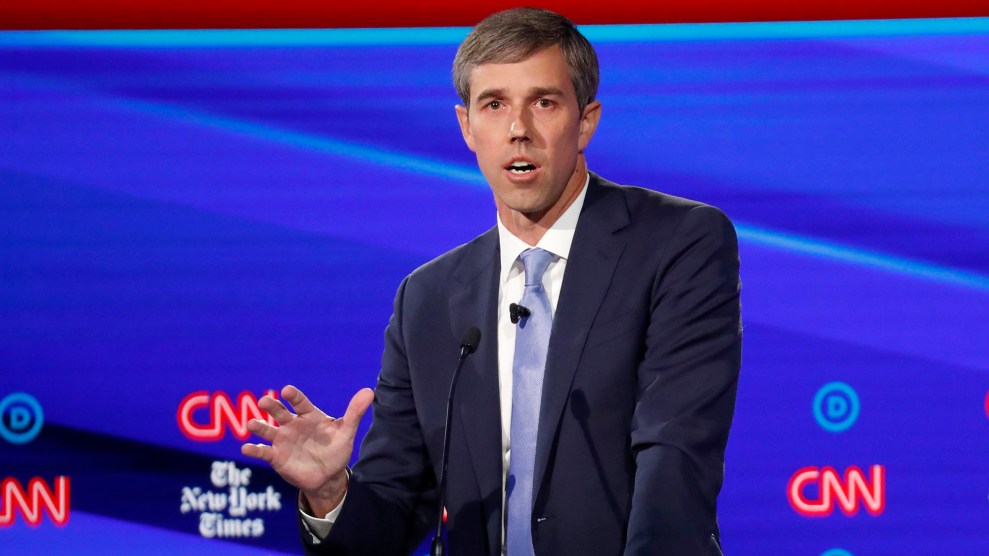 Midway through Tuesday’s 2020 Democratic debate, former Texas Rep. Beto O’Rourke found himself on the defensive over his plan to implement a mandatory buyback of assault weapons. “Let’s decide what we are going to believe in, what we are going to achieve, and let’s bring this country together in order to do that,” he said in support of his vision, a proposal that goes farther to restrict firearms than anything set forth by his fellow Democratic hopefuls.

South Bend Mayor Pete Buttigieg swiftly rejected that logic, saying that pushing such a plan could stymie progress toward other gun reforms. “What we owe those survivors is to actually deliver a solution,” Buttigieg said. “On guns, we are this close to an assault weapons ban. That would be huge. And we’re going to get wrapped around the axle in a debate over whether it’s ‘Hell yes, we’re going to take your guns’?” Minnesota Sen. Amy Klobuchar echoed Buttigieg’s point; California Sen. Kamala Harris, meanwhile, stood firmly by O’Rourke.

The sparring was the inevitable evolution of a disagreement that began been percolating among the Democratic hopefuls during last month’s debate in Michigan. O’Rourke, then just weeks after a deadly rampage in his hometown of El Paso, Texas, declared, “Hell yes, we’re going to take your AR-15.” During that last debate, his colleagues gently offered more moderate solutions, voicing support for universal background checks and an assault weapons ban, ideas that have become planks of the Democratic platform. In the days that followed, Senate Democrats took sharper jabs at O’Rourke’s proposal: Delaware Sen. Chris Coons told CNN that he thought “that clip will be played for years at Second Amendment rallies with organizations that try to scare people by saying Democrats are coming for your guns.”

Though this marks the first time such a fight has shown itself on a Democratic debate stage, it’s an argument Democrats and gun control advocates have been having among themselves since the 2012 elementary school massacre in Newtown, Connecticut. The tragedy had broken the National Rifle Association’s vice-like grip on Congress, and Democratic lawmakers, who had long shied away from guns as a third-rail issue, signaled they would champion reforms. And they set forth on a long road of negotiating with Republicans and gun rights groups to try and pass a modest bill to expand background checks, something gun reformers agreed would do the most to slow the tide of gun deaths.

The measure ultimately failed, and as I wrote last month, some of the veterans of the 2013 negotiations blame their tepid strategy and eagerness to compromise on guns as the reason for its failure. “Nobody who ever got half a loaf asked for half a loaf,” Mark Glaze, who previously served as the executive director of Mayors Against Illegal Guns—now called Everytown for Gun Safety—told me. “If we really wanted universal background checks, we’d be talking about an assault weapons ban. If we really wanted an assault weapons ban, we would be talking about a constitutional amendment.”

There were multiple factors that doomed Manchin-Toomey in 2013, including the strength of the gun lobby and the lack of expertise on the issue in Democratic circles. But seven gun control advocates and former Hill staffers involved in negotiations over the measure told me that the laser-like focus on a popular but fairly unambitious background check bill was a strategic mistake. “To this day, I’m convinced that when we make background checks our first priority, the NRA screams in public and privately lights up cigars,” Glaze says. “We’ve got this decades-long fight to achieve a 90-percent issue. When we finally beat the NRA on passage, which we will, the NRA will lose nothing, but they will have held off our movement for decades.”

Political tactics aside, Buttigieg wasn’t merely criticizing O’Rourke’s boldness. He also took issue with the technicalities of the proposal: O’Rourke had dodged a question that had asked him to explain how he would enforce a mandatory buyback of assault weapons.

“The problem isn’t the polls, the problem is the policy,” Buttigieg said. “You just made it clear that you don’t know how this is going to take weapons off the streets. If you can develop the plan further, we can have a debate. But we can’t wait.”