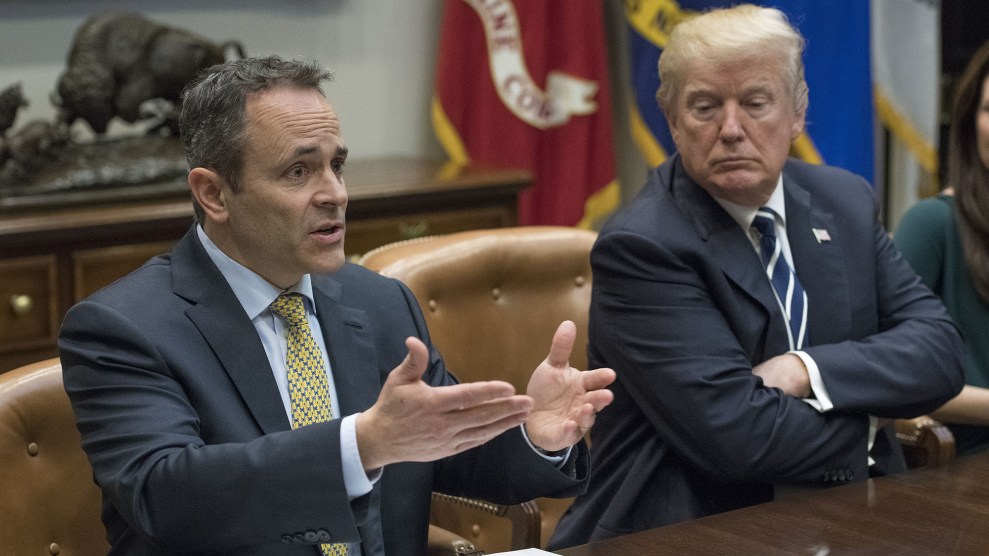 Kentucky Gov. Matt Bevin has spent the past four years acting like a mini Donald Trump, a politician prone to social media outbursts belittling his ideological opponents in the most bombastic fashion. And just a few weeks out from Election Day, it’s a toss up among voters on whether Bevin deserves a second term.

A new poll from Mason-Dixon Polling & Strategy found that voters were evenly between Bevin and his Democratic opponent, current Attorney General Andy Beshear. As the Courier-Journal points out, the poll actually represented a slight improvement for Bevin; his approval among state voters has increased to 45 percent, up from 38 percent when Mason-Dixon last looked at the race in December. (Morning Consult, another polling company, has consistently found that Bevin is the least popular governor in the country.)

As I wrote in our September/October issue, Bevin’s reelection should, in theory, be a cinch. He’s running in a deep-red state where Trump beat Hillary Clinton by 30 percent; Republicans hold both US Senate seats, and Democrats represent just one of the state’s six House districts. And Bevin has done everything to cozy up to Trump, with the president returning that love with a re-endorsement tweet on Tuesday.

Governor @MattBevin has done a wonderful job for the people of Kentucky! He continues to protect your very important Second Amendment. Matt is Strong on Crime and the Border, he Loves our Great Vets and Military. Matt has my Complete and Total Endorsement, and always has!

But Kentucky voters don’t seem to appreciate having a Trump-style governor. As Al Cross, a longtime political reporter in the state, put it to me, “Many Kentuckians see their governor as the personification of the state. And this is a state that often comes in for ridicule. Socioeconomically and demographically, culturally we get looked down on by people on the coast. And often get made fun of. And Kentuckians are sensitive to that. They don’t want their governor to be a jerk. I famously called Matt Bevin an arrogant jerk when he was running in 2015. He is still arrogant from time to time, and he’s still a jerk from time to time. And if it wasn’t for that, he’d be a heavy favorite for reelection.”

And Bevin’s biggest mistake may have been who he has trained most of his ire against: teachers. The governor has spent the past few years picking fights and trading insults with the state’s public school teachers as he crusades to roll back pension benefits. As I reported:

Like many other states, Kentucky has seen a precipitous drop in education funding following the Great Recession. Teacher salaries and spending per pupil are down about 6 percent, adjusted for inflation. Alongside colleagues in West Virginia, Arizona, and Oklahoma, Kentucky teachers joined the “Red for Ed” strikes of 2018, with educators frequently descending on the state Capitol to protest. Last December, when Bevin called a postelection special legislative session to once again try to pass changes to the pension system, teachers flooded Frankfort to sing modified Christmas carols urging lawmakers to leave things alone. After less than 24 hours, legislators shut down the special session without debating any proposals…

The teacher backlash poses a real risk for Bevin. According to Winkler, the former KEA president, schools are the biggest employer in most of Kentucky’s 120 counties, and more than half of KEA’s members are Republican. Last year, Jonathan Shell, the state House majority leader, lost his Republican primary to R. Travis Brenda, a math teacher fed up with Shell’s role in co-writing a pension-cut bill.

Kentucky is one of three states that holds its gubernatorial election in the odd year ahead of the next presidential campaign. Since there are no national races happening at the same time, that can lead to low turnout, making poll predictions challenging. Four years ago, Bevin’s Democratic opponent consistently posted a small lead, but Bevin came out ahead by nine points. And there has been scant polling of the race, with the election less than three weeks away.