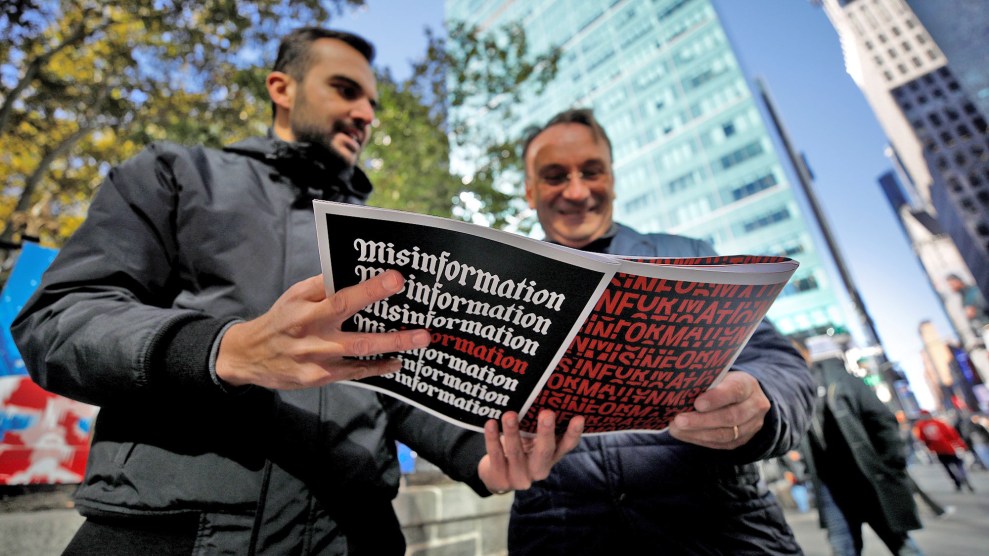 Last week, as President Donald Trump was battered by headlines detailing a whistleblower allegation that he sought Ukrainian interference in the 2020 election, right-wing media outlets rallied to support him by pumping out stories downplaying the revelations.

“Democrats Wrote to Ukraine in May 2018, Demanding It Investigate Trump,” read the headline of the main story on Breitbart’s homepage on Wednesday. “Intel watchdog found whistleblower had ‘political bias’ favoring Trump rival: official,” read another on Fox News‘ site.

The fringe internet and comparatively mainstream right-wing media have melded in the wake of the Ukraine allegations.

“Democrats Asked Ukraine To Investigate Trump—Last Fucking Year,” read the title of one of several similar 4chan threads on the topic, linking to Breitbart’s article or a Federalist one on the same subject. In The_Donald, a raucous and sometimes bigoted home for Trump supporters on Reddit, posts arguing the whistleblower was motivated by political bias against the president accrued thousands of likes.

All of these things might make sense to bring up, if true. But what the headlines and posts elided was that Michael Atkinson, the intelligence community inspector general who reviewed the whistleblower’s complaint, found that “arguable political bias” did not seem to undermine his allegations’ credibility. And that widely cited May letter from Senate Democrats didn’t actually include any call for Trump to be investigated.

The stories and posts show how the fringe internet and comparatively mainstream right-wing media—which have long influenced each other—have, in the wake of the Ukraine allegations, melded into a blob of garbled reactionary media that inhales mainstream news stories and spits out transfigured versions palatable to conservative audiences. Journalists who have long kept a steadfast eye on this media ecosystem have noted how these spaces, and the messages they present, are rapidly converging.

“If The Gateway Pundit and InfoWars formed a cable news channel, it’d look something like the 2019 version of Fox prime time programming,” CNN media reporter Oliver Darcy tweeted last week. “I’ve been tracking the right for the last 4-ish years of my life and I assure you this is not hyperbole,” Jared Holt, a Right Wing Watch reporter, affirmed in response. “The fringe has been ushered into the heart of power.”

In the past, hoaxes and reality-bending news stories in the mainstream conservative media usually worked their way up from sketchy blogs and troll-laden laden forums. During the 2016 election, two researchers at the non-profit Data & Society, Alice Marwick and Becca Lewis, documented how bad faith questions and hoaxes about Hillary Clinton’s health, circulating in right-wing mainstream media like Fox News, originated on 4chan.

“The claims started on 4chan, then [YouTuber and Infowars employee] Paul Joseph Watson started covering it, and then Tucker Carlson and Sean Hannity were asking about it on their primetime Fox News shows,” Lewis recalled, noting how the false claims took hold and were used to question Clinton’s fitness for office.

Lewis, now a communications PhD candidate at Stanford, notes that while the trolls who make up 4chan and the like have often ridiculed more mainstream right-wing news, they also see the value they bring when the outlets spread their messages. “There has always been a sense that those sites are crucial for broadening the movement. That’s where far-right members want to recruit from,” she says.

Ahead of the fall of 2018 midterm elections, mainstream right-wing outlets and pundits, including Rush Limbaugh and Ann Coulter, began pushing hoaxes and conspiracies not only about George Soros’ purported funding of a “migrant caravan” traveling toward the U.S.’s southern border, but also that a series of bomb threats on major liberal figures had been “false flags” orchestrated by Democrats in an attempt to win voters’ sympathy. The migrant caravan and bomb threats were real, but right-wing media outlets and pundits ascribed false origins to them, hoaxes that came directly from misinformation that had been circulating for months on Twitter’s fringe.

Lots of misinformation still travels this well-worn pathway. In July, a smear about Rep. Ilhan Omar (D-Minn.) marrying her brother made its way from message boards and social media into mainstream right-wing media and onto Trump’s Twitter feed. The unsubstantiated claim had been ebbing and flowing on the internet after an anonymous user posted about it on an obscure forum in 2016, before right-wing blogs picked it up and, in some readers’ eyes, brought a patina of legitimacy to the story with either paper-thin or nonexistent reporting.

Ben Collins, an NBC tech and internet reporter, has diagramed the phenomenon, dubbing it the “Human Centipede of Intentionally Bad Information.”

This chart’s from a speech I gave at Pitzer College last year. This story is a perfect example of the Human Centipede of Bad Info in the 2016 Election.

Malicious actor plants dirt anonymously. It clears the lowest bar for standards at each outlet. Then the cycle feeds itself. pic.twitter.com/lUAbq9rPau

While Collins’s chart was designed to illustrate how false claims can gain credence moving up the right-wing media food chain, the flow and direction of bad information have gotten more muddled since he made it in 2018. Several incidents since news of the Ukraine whistleblower allegation broke illustrate that there can be little to no latency between what’s on forums and message boards and what’s on right-wing news websites and on Fox News, as hoax peddling sites and “normie” right-wing media move in near lockstep, sharing the same set of bad information about the story.

The_Donald and 4chan users are reviving months old conspiracies and dubiously reported stories from mainstream sources like Fox News and The Hill’s recently departed right-wing opinion writer, John Solomon, illustrating how the boards are using such storylines to help bend the narrative about Ukrainian corruption in misleading directions  that are more favorable to Trump.

There is nuance to this, and not everyone is on the same page: Fox News isn’t a total ideological monolith, with hosts disagreeing and some reporting more responsibly than others. The Drudge Report seems to have its own agenda that doesn’t necessarily fall exactly in line with top Republicans. But overall, the extended-right wing media universe trends more towards homogeneity than away from it.

According to Whitney Phillips, a Syracuse University communications professor who specializes in online misinformation and extremism, the Ukraine story’s prominence has meant misleading stories geared toward a right-wing audience are reaching an unusually large and influential audience.

“Those stories are unavoidable in a way that they weren’t in 2017 when the Seth Rich stuff was bubbling up on Fox News,” she says. “If you’re not really plugged into specific circles you probably wouldn’t really see it, or see the QAnon stuff, or the Pizzagate stuff. These Ukraine stories are all central now.”

In a way, the Trump administration gave a green light to the dissemination of false information when, within a month of its inauguration, it gave White House press credentials to The Gateway Pundit, which has served as a key intermediary between conspiracy-mongering right-wing troll forums and more mainstream conservative media.

“The relationship between these places has been happening for years,” says Phillips, adding that a merger of the fringe right-wing internet and its mainstream equivalents has been a long time coming. Phillips says Trump’s frequent retweets of QAnon supporters and his airing of conspiracy theories—including one he shared with Ukraine’s president, alleging wrongdoing by a cybersecurity firm hired by the Democratic National Committee to investigate Russia’s 2016 hack of its computer systems—show he’s been complicit in building a distorted information landscape.

“This is the logical conclusion of where Trump has been heading the whole time,” she says.