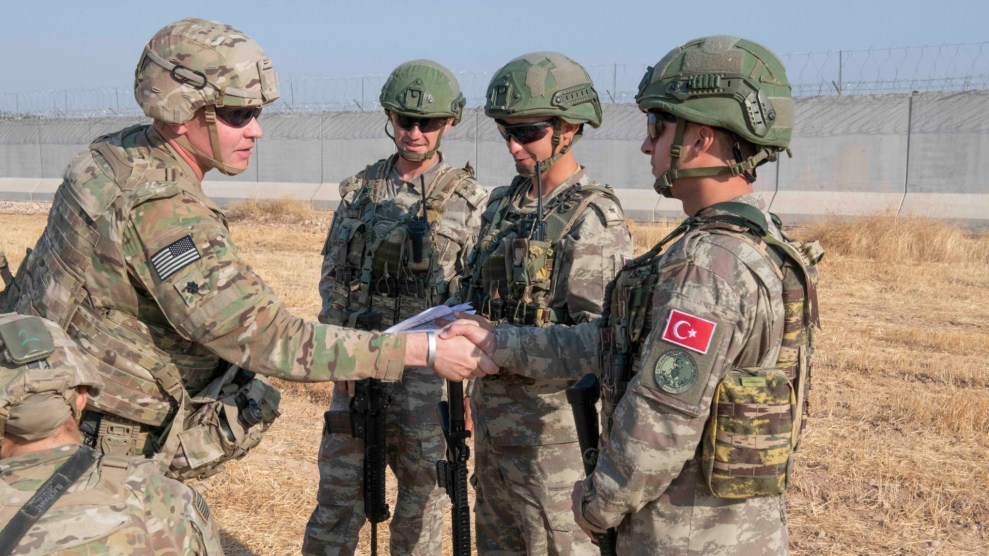 In Washington, DC, right now, few American allies are viewed with more hostility than Turkey, which has received widespread condemnation for its invasion of northern Syria last week. Defense Secretary Mark Esper lambasted the incursion as “unnecessary and impulsive,” adding that the “relationship between our two countries has…been damaged.” Sen. Lindsey Graham (R-S.C.) said Turkey was not “acting as a good NATO ally.” President Donald Trump—who is facing a fierce backlash from congressional Republicans after originally green-lighting the invasion—slapped sanctions on Turkish leaders Monday.

On Monday night, the Army tweeted out a news story from September that described a NATO training operation in Germany involving the United States and more than a dozen partner countries, including Turkey. The tweet specifically singled out “Turkish commandos,” who, it noted, had “joined American and Italian paratroopers during…an airborne assault that was a part of the training exercise. The tweet included the hashtag “#Partnership” but offered no context related to the escalating violence in Syria that threw a wrench in that alliance last week. The Army did not immediately respond to a request for comment about the tweet.

The Army’s apparent praise for Turkey did not go unnoticed among reporters and military experts online.

“US policy in the Middle East is nothing if not incoherent,” wrote Mother Jones’ Shane Bauer, who has reported extensively on the Syrian civil war.

Joe Kassabian, an Army veteran and author, had perhaps the most succinct reaction: “Fucking yikes.”