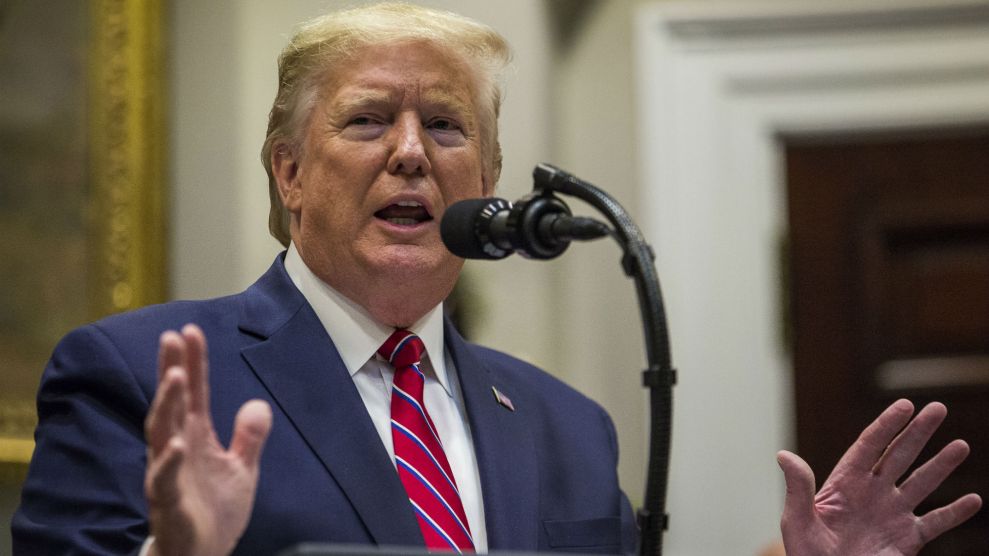 “Did the President lie?” House general counsel Douglas Letter said to the US Court of Appeals for the District of Columbia, CNN reported. “Was the President not truthful in his responses to the Mueller investigation?” Letter was arguing that the House needs access to grand jury material Mueller collected as part of Mueller’s Russia probe. The Justice Department has refused to share that information with Congress.

Letter didn’t say which written answers he was talking about. But testimony in the recent trial of longtime Trump adviser Roger Stone suggested that Trump likely lied when he claimed not to remember hearing directly or indirectly from Stone about WikiLeaks’ plans for releasing Democratic emails hacked by Russia. Stone was convicted Friday on charges of making false statements to Congress, obstruction of justice, and witness tampering.

Trump told Mueller in writing that he did not recall “discussing WikiLeaks with [Stone], nor do I recall being aware of Mr. Stone having discussed WikiLeaks with individuals associated with my campaign.” Trump also told Mueller that he did not remember hearing that “Stone or anyone associated with my campaign had discussions with any of the entities named in the question [including WikiLeaks] regarding the content or timing of release of hacked emails.” Trump, who has boasted about his supposedly excellent memory, even claimed that he had “no recollection of the specifics of any conversations I had with Mr. Stone between June 1, 2016,” and Election Day.

But at Stone’s trial, Rick Gates, a former Trump campaign staffer, described a phone call between Trump and Stone that took place on July 31, 2016—not long after WikiLeaks released a slew of Democratic National Committee emails. Immediately after hanging up with Stone, Trump told Gates that “more information would be coming,” Gates recalled.

The Mueller report refers to Manafort speaking with Trump after WikiLeaks’ first release of documents, in July 2016. But the relevant passage is redacted because it is based on Manafort’s grand jury testimony—some of the same grand jury information that Democrats are seeking.

Manafort’s “situation shows so clearly that there is evidence, very sadly, that the President might have provided untruthful answers and this is a key part of the impeachment inquiry,” Letter said Monday, according to CNN.

In his statements to Mueller, Trump also downplayed his knowledge of an effort during the 2016 campaign to complete a deal to a build a Trump-branded tower in Moscow. Trump lied publicly about this subject, claiming repeatedly that he had “no business” in Russia after he had signed a letter of intent to pursue the Moscow deal. Responding to Mueller’s questions, Trump also gave written answers that were probably false. Trump told Mueller that he did not recall discussing the possibility of traveling to Russia during the campaign. Michael Cohen—the Trump attorney who spearheaded the project—has testified that Trump told him to consult with Trump campaign chief Corey Lewandowski about setting up such a trip.

Trump also told Mueller he was aware that Cohen had sent “an email regarding the Letter of Intent” to a top Putin aide, Dmitry Peskov, “at a general, public email account, which should show there was no meaningful relationship with people in power in Russia.” But Trump failed to mention that Cohen received a response from Peskov through an aide, and that Cohen spoke to that aide, Elena Poliakova, on the phone about the tower deal. Cohen has said he briefed Trump on this call just after it occurred.

Trump refused to agree to an in-person interview with Mueller’s team. The president’s attorneys said that was because Trump feared a perjury trap—in other words, that he would be unable to testify without lying. When Trump eventually agreed to answer some questions in writing, he still refused to answer queries about allegations that he had obstructed justice.

The Mueller report called Trump’s written answers inadequate and incomplete. Asked by Rep. Val Demings (D-Fla.) during a July congressional hearing if Trump “wasn’t always being truthful” in his answers, Mueller responded: “I would say, generally.” Mueller’s office later said the special counsel did not necessarily intend to call Trump’s answers false and referred back to the report’s more measured language. After the damning revelations from Stone’s trial, lawmakers are once again trying to answer Demings’ question.