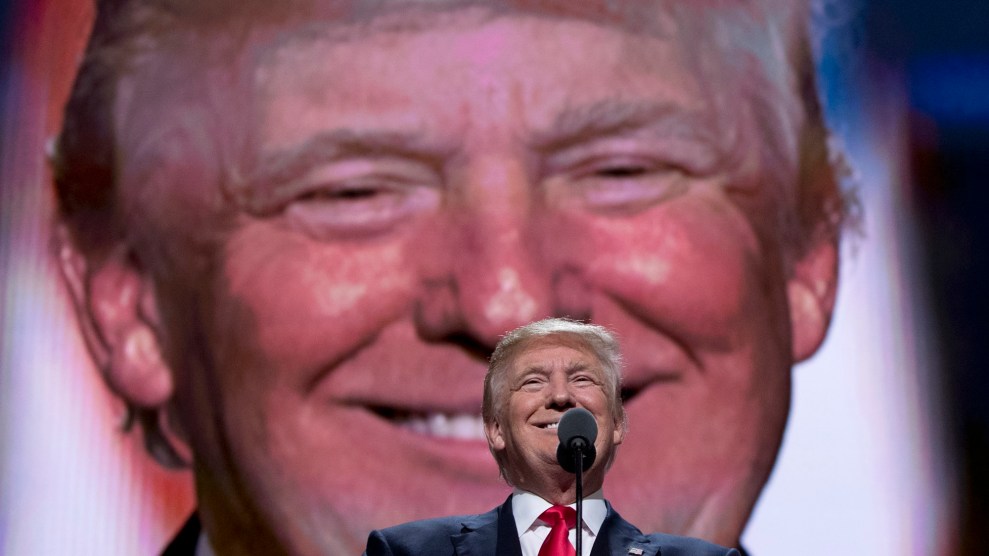 Donald Trump has told many lies and falsehoods. He’s lied about the Russia scandal. He’s lied about his ties to organized crime. Perhaps he’s lied so much that freshly excavated prevarications don’t register greatly. Yet recent news reports revealing that Trump was pursuing a huge development deal in Moscow in late 2015 and early 2016 show that during the campaign Trump committed a tremendous act of deception.

This mammoth duplicity was encompassed in a small fib. On December 2, 2015, during an interview with an Associated Press reporter, Trump was asked about his relationship with a fellow named Felix Sater. Trump, who was then the front-runner in the GOP presidential nomination contest, replied, “Felix Sater, boy, I have to even think about it. I’m not that familiar with him.” He referred questions to his Trump Organization. One of his lawyers, Alan Garten, subsequently told the AP that Sater once prospected for real estate deals for the Trump Organization and that the arrangement lasted for six months in 2010.

What neither Trump nor Garten said was that—at that very moment—Trump was in the middle of the deal to build a Trump Tower in the Russian capital and that Sater had put together the venture. As he was running for president, Trump was hiding this project from the American public, and he was insisting he barely knew the man at the center of it. This was serious deceit.

As he was running for president, Trump was hiding this project from the American public, and he was insisting he barely knew the man at the center of it.

Trump’s claim that he was unfamiliar with Sater was regarded at the time as absurd by journalists who have followed Trump’s career; it appeared the candidate was attempting to distance himself from a one-time felon. Sater had a substantial criminal record. In the early 1990s, when he was in his mid-20s, Sater went to jail for about a year after he smashed a broken margarita glass into the face of a man during a barroom altercation. After that, he became part of a mid-1990s stock swindle tied to the Mafia and Russian organized crime. To escape going back to jail, he pleaded guilty to racketeering and became a cooperating witness for the FBI.

While an informant for the bureau, Sater hooked up with a real estate development firm in New York City called Bayrock, and in the 2000s he cooked up various projects with Trump. Many fizzled out and ended up in lawsuits. But at least one was built: the Trump SoHo hotel and condominium project. (That deal also prompted a lawsuit in which buyers of units there claimed to have been defrauded by Trump, his adult children, and others. Trump and his co-defendants settled the case, agreeing to refund 90 percent of $3 million in deposits but admitting no wrongdoing.) Throughout this stretch, Sater, who was born in what is now Russia and who boasted connections there, worked with Trump to try to land a tower project in Moscow, which had long been a dream for Trump.

In 2007, the New York Times revealed Sater’s past as a criminal and reported that Trump was in business with a man who had been accused of “conspiring with the Mafia to launder money and defraud investors.” Trump told the Times he knew nothing of Sater’s dark past. Though Sater departed Bayrock after the Times’ article, Trump’s organization brought him on board three years later, and Sater was wheeling and dealing, seeking projects for Trump and handing out Trump Organization business cards describing him as a “senior advisor to Donald Trump.”

In subsequent years, Trump issued conflicting statements about his relationship with Sater. In a 2011 deposition, Trump acknowledged that he used to speak to Sater “for a period of time.” Yet in a 2013 deposition, Trump said, “If he were sitting in the room right now, I really wouldn’t know what he looked like.” Trump had plenty of reason to distance himself from his felonious onetime business partner. Sater wasn’t simply controversial; he posed a serious risk for Trump. If Trump had been aware of Sater’s felonious and fraudulent past before the Times story came out, such knowledge could taint business deals the Trump Organization made involving Bayrock and possibly create a legal liability.

So it was no surprise when Trump in late November 2015 acted as if he had never met Sater. But now it’s obvious that his dishonest response to the question about Sater was far more significant.

Around September 2015, Sater approached Michael Cohen—a lawyer for Trump and an executive vice president at the Trump Organization—with a proposal for the construction of a luxury hotel, office, and residential condominium building in the Russian capital that would be called Trump Tower Moscow. In a recently released statement, Cohen noted that the project called for a Russian company named I.C. Expert Investment Company to develop the building, and Trump would license his name to the venture. Cohen said he “primarily communicated” with the Russian firm through Sater. Cohen recalled, “Sater claimed to have appropriate relationships within the business community in Russia in order to obtain the real estate, financing, government permits, and other items necessary for such a development…Sater acted as a deal broker and would have been compensated by the licensee if the proposal had been successful. I have known Mr. Sater for several decades and I routinely handled communications with him regarding the proposal.”

This was Sater’s deal. According to a source familiar with this aspect of the Trump-Russia investigation, Trump was fully aware that Sater had brokered the agreement. And around late October 2015, Trump himself signed a letter of intent with I.C. Expert Investment to proceed with the project.

The arrangement would have put $4 million in upfront fees in Trump’s pocket. Trump’s company solicited building designs from different architects and engaged in discussions regarding potential financing for the proposal. (I.C. Expert Investment projects were sometimes financed by Russian banks under US economic sanctions. Last month, Sater told the New York Times that he lined up financial support from VTB Bank, an institution partially owned by the Kremlin and now under US sanctions.)

It is hard to see Trump’s answer as anything other than a deceptive reply designed to hide the fact that he was attempting to land a Putin-sanctioned deal in Russia.

Sater considered this endeavor related—perhaps crucial—to Trump’s presidential campaign. In October, when he forwarded Cohen the letter of intent for Trump to sign, he wrote, “Lets make this happen and build a Trump Moscow. And possibly fix relations between the countries by showing everyone that commerce & business are much better and more practical than politics. That should be Putins message as well, and we will help him agree on that message. Help world peace and make a lot of money, I would say thats a great lifetime goal for us to go after.” A few weeks later, Sater emailed Cohen: “I arranged for Ivanka to sit at Putins private chair at his desk and office in the Kremlin. I will get Putin on this program and we will get Donald elected…Our boy can become president of the USA and we can engineer it. I will get all of Putins team to buy in on this, I will manage this process.” In mid-January, Cohen, at Sater’s suggestion, sent a letter to Vladimir Putin’s office to ask for help in obtaining permission for the construction from the Russian government.

Ponder all this for a moment. At the time Trump was running for president, he was endeavoring to pull off a major deal in Moscow that required government permission. That is, if Putin didn’t favor this project, it wouldn’t happen. Trump’s right-hand legal man even asked Putin’s office to help them. And through all this, Trump was making positive statements about Putin. One example: In mid-December 2015, Trump said on MSNBC’s Morning Joe that Putin was a better leader than Barack Obama, and when Joe Scarborough asserted that Putin “kills journalists that don’t agree with him,” Trump scoffed at him and said, “He’s running his country and at least he’s a leader, unlike what we have in this country…I think our country does plenty of killing also.”

Trump was defending a repressive leader—but one with whom he was trying to do business in private. Throughout the 2016 election, people wondered why Trump consistently made oddly positive remarks about Putin. Part of the answer is clear: You cannot develop major construction projects in Moscow if you criticize Putin.

Back to Sater. As Trump was in the thick of it with this Sater-brokered project, he gave the impression he hardly had any idea who Sater was. It is hard to see Trump’s answer as anything other than a deceptive reply designed to hide the fact that he was attempting to land a Putin-sanctioned deal in Russia (that would earn him several million dollars) at the same time he was pitching himself as the best possible president of the United States. The truthful answer would have been: “Sure, I know Felix Sater, and right now I am working with him to develop a major hotel-residential-retail project in Moscow that can only move forward with the permission of the Russian government.” How would such a reply have played in the campaign?

The Sater project, like Trump’s previous efforts to develop a Trump Tower in Moscow, eventually fell apart. Cohen says he decided to abandon the idea “for business reasons” in late January 2016. But Sater remained in the Trump orbit. In early 2017, he and Cohen worked on a Russia-friendly peace plan for Ukraine and tried to get the Trump White House to adopt it.

Trump pulled off a con during the presidential campaign. He insisted he cared only about US interests—while he was privately negotiating a deal in Moscow that could only happen with the assent of Putin’s government. In and of itself, this should be a major scandal. Yet Trump got away with it. And to do so, he had to lie about his relationship with Sater. This was not the first instance in which he had misrepresented his connection to Sater. But it was the most important one.