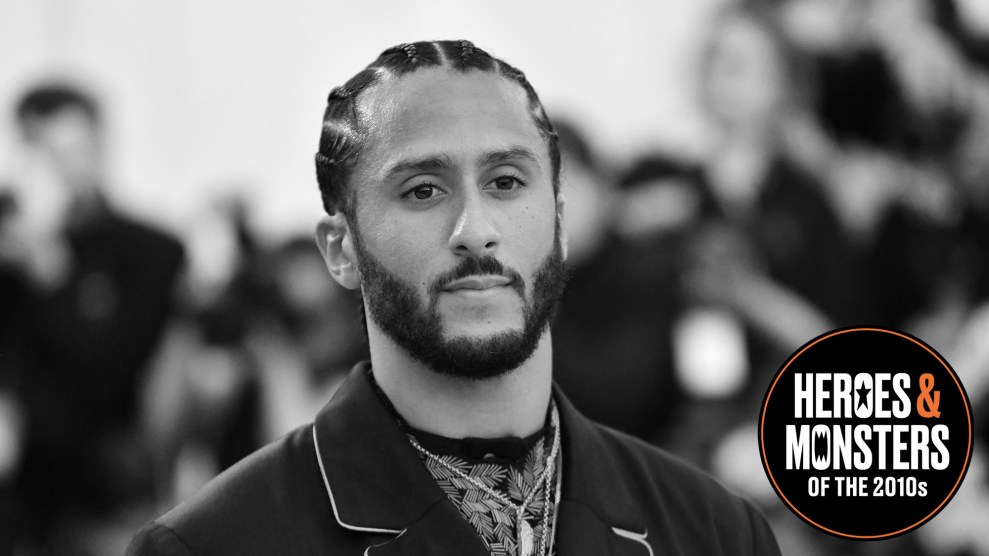 In November, I got a text from a friend that former 49ers quarterback and current languishing free agent Colin Kaepernick was nearby, quietly doing his thing handing out food and supplies to homeless people in West Oakland (on his birthday). A couple weeks later, people were momentarily consumed by the drama surrounding what was supposed to be his first workout for NFL scouts after two plus years of being iced out by the league. The session turned out to be a sham, and NFL supervillain Roger Goodell said in December that the NFL had “moved on.”

Whatever you think of Kaepernick as a football player, he has proven himself to be a good and righteous human being. As a Niners fan, I cursed his name too many times to count, and by the 2016 season, I was fully disenchanted with the quarterback. And then, before a preseason game, he sat during the national anthem to protest police brutality and racial oppression. Soon after, he began kneeling instead, and he kept on kneeling as players around the league joined the protest, driving the NFL and many of its fans into apoplexies of rage. All of it made the agonizing over bad reads and touchdowns-that-might’ve-been feel irrelevant.

Kaepernick’s protest and the NFL’s shameful collusive reaction transformed many a San Francisco fan’s exasperation with our QB into a sense of solidarity and newfound pride. It was no longer possible to evaluate Kaep as a football player alone. That was never Kaep’s goal. He still wanted to play, still wanted to take the field and throw the ball into double coverage and go on being the exhilarating but also infuriating quarterback he’d always been.

But the irony of all the whining about Kaepernick supposedly polluting the sanctity of America’s escapist pleasures with thoughts of politics and real life is that it was the NFL’s response that fully transported fans beyond sports. By blackballing Kaepernick, the league evoked a separate set of grim American realities—most directly the willful blindness to the gross racial inequities in our society. But it also reflected a deepening pattern in the 2010s of powerful interests exploiting and silencing those they rely on to further their empires. In the league’s muzzling of Kaepernick, how many people discerned an echo of their own companies’ clampdowns on worker speech, worker organizing, on any sort of worker pushback whatsoever? In the response of Texans owner Bob McNair to the player protests—”we can’t have inmates running the prison”—how many people heard resonances with stuff their own corporate overlords have said and done? Every Sunday that Kaepernick didn’t suit up was a reminder of all the ways that workers, particularly low-income and people of color, get knuckled under by the bosses.

Kaepernick helped start a movement that spread through the league and across professional sports, and it continues today. He showed once again that NFL owners—predominately old, rich, and white—are perfectly happy for NFL players—predominately Black—to put their bodies on the line but just can’t stand for them to speak their minds. In the meantime, Kaep hasn’t been able to get even a backup QB job since the end of the 2016 season, which is absurd even to a former hater (here’s a list from earlier this season of eight starting quarterbacks with worse stats than his). During his indefinite free agency, Kaepernick has donated over $1 million dollars to organizations supporting anti-violence, diversity, and anti-poverty initiatives. He started a foundation to fight oppression through activism and education. He’s put in work for the community over and over again, and that’s what really matters. He will be on the right side of history. I can’t say the same for the NFL.