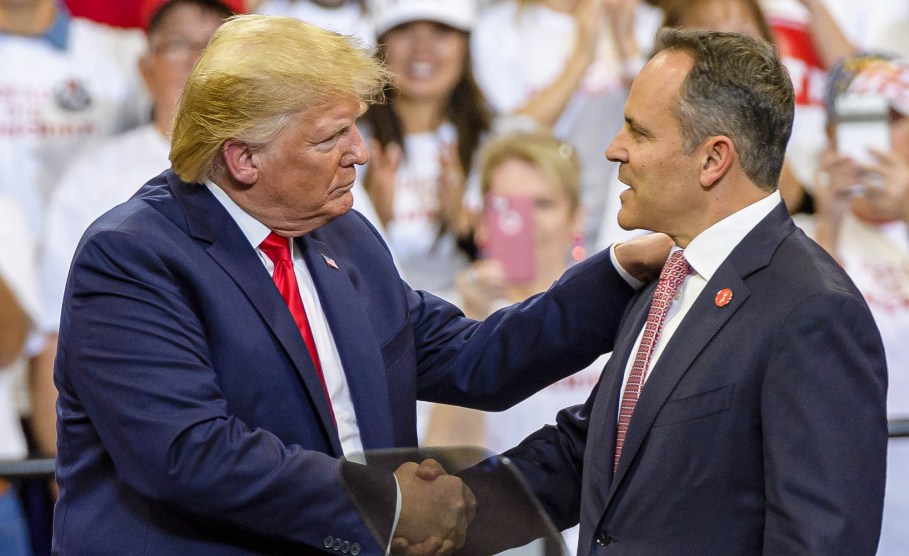 Matt Bevin, former Republican governor of Kentucky, exited office less than a week ago after narrowly losing his reelection bid to Democrat Andy Beshear only to land himself in the middle of a new controversy. On his way out of the governor’s mansion, the Republican issued at least 419 commutations and 161 pardons. According to the Louisville Courier-Journal, “The beneficiaries include one offender convicted of raping a child, another who hired a hit man to kill his business partner and a third who killed his parents.” Some of those pardoned reportedly have ties to Bevin’s political donors. One man pardoned for homicide is from a family that raised $21,500 to relieve Bevin’s campaign debt from his 2015 campaign.

Bevin took to Twitter on Friday to defend himself in a 20-part thread:

Not one person receiving a pardon would I not welcome as a co-worker, neighbor, or to sit beside me or any member of my family in a church pew or at a public event…

Bevin is now facing condemnation from members of his own party. On Friday, Kentucky Senate President Robert Stivers called for a federal investigation. “From what we know of former Governor Bevin’s extreme pardons and commutations, the Senate Republican Majority condemns his actions as a travesty and perversion of justice,” Stivers said. US Senate Majority Leader Mitch McConnell called the pardons “completely inappropriate. I expect he has the power to do it, but looking at the examples of people who were incarcerated as the result of heinous crimes, no, I don’t approve of them.”

In a profile this fall, my colleague Patrick Caldwell wrote that Bevin’s reelection, in theory, should’ve been a cinch. But apparently the Trumpiest governor in the country, couldn’t get out of his own way:

Bevin’s unpopularity appears to be less about Kentuckians rejecting his conservative agenda than voters growing tired of their governor’s unfiltered, Trumpian persona and penchant for generating headlines with ill-advised remarks. “Many Kentuckians see their governor as the personification of the state,” says Al Cross, the longtime dean of the state’s political press at the Louisville Courier-Journal and now a journalism professor at the University of Kentucky. “And this is a state that often comes in for ridicule. Socioeconomically and demographically, culturally, we get looked down on by people on the coasts. And often get made fun of. And Kentuckians are sensitive to that. They don’t want their governor to be a jerk.”