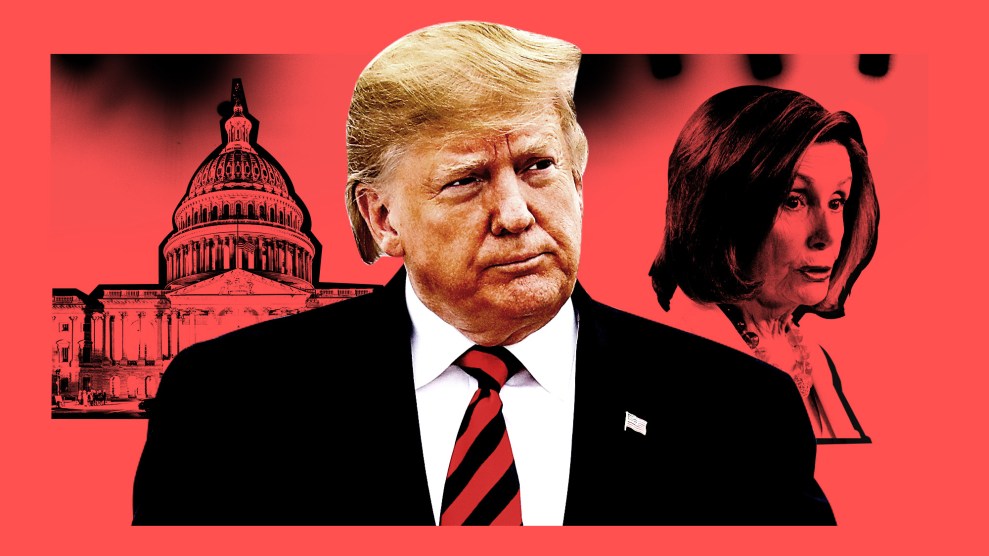 On Wednesday, the House of Representatives voted, on a largely partisan basis, to impeach Donald Trump—only the third time a US president been indicted in this fashion. And as significant and historic as this action was, there was nothing shocking about it.

That is different from the most recent impeachment proceedings. Though Richard Nixon had been branded “Tricky Dick” before he won the presidency in 1968, the public was astonished when the Watergate scandal produced tapes of conversations that showed Nixon to be foul-mouthed, mean-spirited, and bigoted. The tapes yielded undeniable evidence that Nixon directly ordered a cover-up of the Watergate break-in, but the up-close-and-personal depiction of a crude and thuggish president stunned many Americans and bolstered the case for impeachment. Decades later, Bill Clinton’s behavior in the White House also shocked much of the nation. Despite Clinton’s previous personal scandals, his brazen and reckless affair with a subordinate that included trysts in the Oval Office and that risked his presidency and fueled the impeachment drive against him was indeed appalling.

Listen to Washington DC bureau chief David Corn break down the political prospects for President Donald Trump as the Republican-controlled Senate prepares for its impeachment trial, on this breaking news edition of the Mother Jones Podcast:

Whatever the odds were on January 20, 2017, of Trump being impeached, this would have been a good bet to make. Trump’s past was his—and the nation’s—future.

It’s probably fair to say that when Nixon and Clinton first entered the White House, few people expected their presidencies to be marred by impeachment proceedings. (Nixon resigned 12 days after the House Judiciary Committee approved three articles of impeachment and two weeks before the full House was expected to vote on the articles. Clinton was impeached by the House on an almost entirely Republican vote and then acquitted by the Senate.) With Trump, impeachment seemed practically inevitable from Day One.

That’s not because, as many Republicans bray, Democrats were gunning for Trump as soon as his moderately attended inauguration ended. It’s because Trump entered office as virtually an advertisement for impeachment. His disregard for the law and his profound lack of integrity already formed a prominent part of his permanent record.  He had run a fraudulent business (for which he would later be fined $25 million). He and three of his children (Eric, Donald Jr., and Ivanka) had overseen a fraudulent foundation (for which they would later be sanctioned). He was widely known to be a cheat who didn’t pay his bills. He was shown to be a nonstop liar. There had been plenty of stories and lawsuits focused on Trump and the Trump Organization’s shady business practices. He had worked with mobsters (and lied about it). He had hired and still hero-worshiped Roy Cohn, a ruthless, by-whatever-means lawyer who represented organized crime figures. That in itself was a huge tell.

Days before moving into the White House, Trump held a press conference in which he claimed he would take steps to address possible conflicts of interest between his business and the presidency—but this was mainly a ruse. He had broken his promise to release his tax returns, failing to comply with this most basic requirement of transparency for a politician. And the instant he stepped into the Oval Office, Trump began violating the Constitution by running afoul of the emoluments clause, which prohibits a commander in chief from accepting payments from foreign governments. His hotels and businesses routinely pocketed revenue from overseas governments and officials.

Trump had demonstrated a penchant for deceitful practices—and for abusing power. He was clearly a pathological narcissist with a long history of eviscerating norms, violating rules, and even breaking laws to serve his own needs. And he had engaged in behavior that now seems quite similar to the misconduct that led to impeachment. Prior to becoming president, Trump claimed to have hired private investigators to dig up dirt on President Barack Obama in a feckless attempt to prove the baseless conspiracy theory that Obama had been born in Kenya. And he invited a foreign adversary to intervene in the 2016 contest when he called on Russian operatives to hack Hillary Clinton. (Trump also welcomed, denied, and aided and abetted Moscow’s covert attack on the election that was waged in part to help Trump win.)

If there had been an algorithm that predicted impeachments, Trump would have rung the bell.

The warning signs continued after he became president. Cronyism and nepotism ran rampant in the White House and throughout his administration. Trump exploited the presidency to hype his own businesses. His kids used his presidency to cash in. Cabinet members became involved in assorted scandals. Jared Kushner, Trump’s son-in-law, was given a plum White House job, though he couldn’t obtain a security clearance. (Trump eventually had to order that Kushner be granted a clearance.) Trump’s companies pushed to expand their overseas operations (despite his promise that they would not). Trump trampled ethics rules. His political associates moved not to drain Washington’s swamp but to make it their own.

The lies kept coming and coming and coming. The Washington Post’s list of Trump’s lies and false statements since he became president now tops 15,000. During the Clinton impeachment, Republican Rep. Lindsey Graham of South Carolina proclaimed, “You don’t even have to be convicted of a crime to lose your job in this constitutional republic if this body determines that your conduct as a public official is clearly out of bounds in your role…Impeachment is about restoring honor and integrity to the office.” Now Graham, a senator and unswerving Trump defender, has indicated he won’t abide by the oath senators must take to be impartial during an impeachment trial.

No one can say of the impeachment of Donald Trump, “We did not see it coming.” There was a boatload of indicators. Trump retaining investigators to collect muck? Check (Rudy Giuliani). Trump pushing conspiracy swill? Check (the DNC-server-in-Ukraine hogwash). Trump asking overseas government to intervene in a US election? Check (Ukraine). And check (China). Trump misusing his power for personal gain and then, once caught, both lying and bragging about it—we’ve seen this movie before. More than once. The theme does not change: Trump places his own interests over…well, anything else.

Throughout his presidency, there has been a firehose of disclosures that serve as reminders of his bottomless corruption. A few examples: Trump directed his personal lawyer and fixer, Michael Cohen, to make illegal hush-money payments to porn star Stormy Daniels shortly before the 2016 election to keep her from talking about her alleged extramarital affair with Trump. Trump and his family engaged in massive fraud as part of multiple schemes over the years to escape paying hundreds of millions of dollars in taxes. Trump, during the campaign, secretly tried to score a development project in Moscow that could have earned him hundreds of millions of dollars, and his company asked Vladimir Putin’s office for assistance in sealing the deal. (Throughout the race, Trump falsely told American voters that he had no business interests in Russia.) According to the final report of special counsel Robert Mueller, Trump appears to have obstructed justice on multiple occasions as president. (The report noted that Trump repeatedly told aides he wished he had a lawyer like Roy Cohn, who died in 1986, working for him in the White House.) In September, the news broke that Trump had told senior Russian officials during an Oval Office meeting in May 2017 that he was unconcerned about Moscow’s assault on the 2016 election that helped him become president. Here was the commander in chief letting a foreign adversary that attacked the United States off the hook because its actions had benefitted him.

It seems that impeachment was practically preordained. Trump was destined to corrupt the office from the second he entered it—and he did. But initially, Democrats—at least those in the leadership—were reluctant to launch an impeachment inquiry, calculating that it would not be in their political favor. It was simple math: Impeachment could threaten the 41 House Democrats hailing from congressional districts Trump carried in 2016, and, consequently, imperil the Democratic majority in the House. (For House Speaker Nancy Pelosi, there was no worse nightmare than a 2020 election that left Trump in place with the GOP again in charge of all of Congress.)

Trump’s violation of the emoluments clause, his role as a co-conspirator in the Stormy Daniels case, his alleged obstructions of justice, his interactions with Russia—all this and more had prompted some Democrats and grassroots activists to call for his impeachment. But Pelosi resisted—until the Ukraine scandal. Trump’s malfeasance had become impossible to sidestep. Resistance in the face of this obvious transgression—Trump’s attempt to underhandedly use his office and taxpayer money to muscle an ally to influence the 2020 campaign in his favor—was futile. Impeachment had become unavoidable. Trump’s wrongdoing was not merely enriching him and his family; it was threatening the next election. The only barrier to impeachment—Democrats’ reluctance to go nuclear—crumbled.

Whatever the odds were on January 20, 2017, of Trump being impeached, this would have been a good bet to make. Trump’s past was his—and the nation’s—future. He was fated to be struck with a self-inflicted scandal, or several. The Democrats have brought him up on narrow charges focused on one specific instance of wrongdoing. (In a way, Trump is getting off easy, as I’ve previously noted.) Yet the Ukraine caper exemplifies Trump’s spree of misdeeds that began long before he became president and that did not cease once he took the oath of office. His actions in this episode that have been translated into the two articles of impeachment—abuse of office, obstruction of Congress—are not at all remarkable, given his résumé. But that does not undercut the seriousness of this impeachment. Trump’s acts reflect a deep moral and ethical rot that has for decades been at the core of his story and that now, with this vote, has come to be recognized, at least by one political party, as a threat to the constitutional order of the United States.