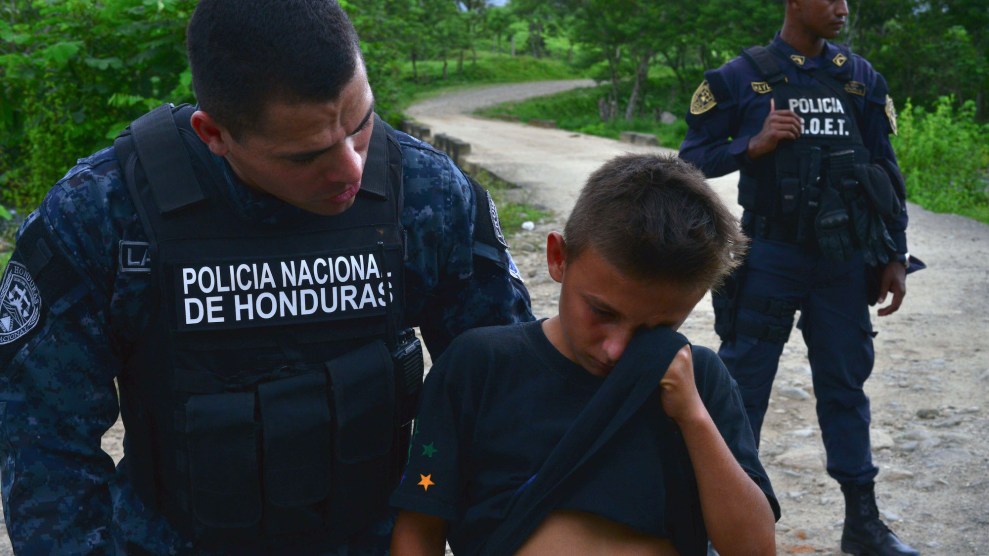 Officer Lagos Lobos talks to a boy whose parents tried to send him to the United States with a coyote. Days earlier, Lagos' ex-wife had smuggled their son into the US without his permission.Miguel Juarez Lugo/AP

There are only slightly more people in all of Honduras than in New York City. Yet in the last fiscal year, more than 250,000 Hondurans—roughly 3 percent of everyone in the country—crossed into the United States, fleeing a country where gangs extort and murder with impunity.

Now the United States is moving forward with a plan to outsource asylum claims to Honduras—effectively ending its own responsibilities to asylum seekers. Under an agreement signed by both governments in September and published on Monday by the Los Angeles Times, asylum seekers stopped at the US-Mexico border can be flown to Honduras and forced to seek protection there. If Honduras denies their claim, they’ll become ineligible to seek protection in the United States, according to the text of the deal. If Honduras grants them protection, they’ll have to live in what is still one of the world’s most violent countries, in spite of a falling murder rate.

In October, a New York jury convicted Honduran President Juan Orlando Hernández’s brother of trafficking cocaine in what prosecutors described as a system of “state-sponsored drug trafficking.” They named Hernández as a co-conspirator but stopped short of charging him. So the United States is now ceding authority over whether people deserve protection from life-threatening persecution to a country whose president was named by its own prosecutors as a conspirator in a massive drug trafficking scheme.