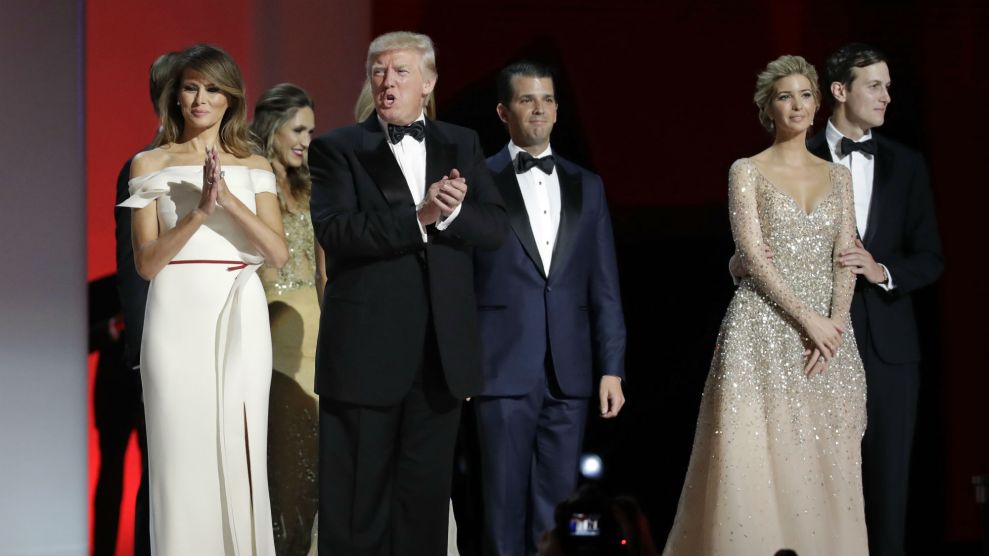 The Trump Presidential Inaugural Committee was swimming in cash, and by the time the festivities had ended, it had raised over $107 million—far more than any other presidential inaugural in history. But it also spent extravagantly, and according to documents recently revealed as part of a lawsuit, staffers were worrying about the bad optics of some of their financial decisions even as they moved forward with them—much of it under the watchful eye of Ivanka Trump.

The records made public as part of the lawsuit reveal that there was a real lack of separation between the Trumps as business owners and the Trumps as the incoming first family. Shortly after the 2016 election, as the newly formed committee was scrambling to organize inaugural events, Rick Gates, the committee’s deputy chair, received a quote from the Trump International Hotel in Washington for the cost of using the hotel’s ballroom. The price tag for the luxury DC establishment, housed in the historic Old Post Office building and owned and operated by the family of the president-elect was huge: $3.6 million for eight days of use, or $450,000 per day. Gates emailed Ivanka Trump, who owns a piece of the hotel, to raise his concerns.

Staffers were worrying about the bad optics of some of their financial decisions even as they moved forward with them—much of it under the watchful eye of Ivanka Trump.

“First, the cost itself seems quite high compared to other property buyouts for the week,” Gates wrote. “Second, I am a bit worried about the optics of PIC [Presidential Inaugural Committee] paying Trump Hotel a high fee and the media making a big story out of it.”

A few days later, Ivanka Trump told Gates that she had called the general manager of the property and the hotel came back to the inaugural committee with a new quote—better, but still asking for $175,000 a day. That rate far exceeded the hotel’s own internal pricing guidelines, and it seems likely that Ivanka Trump, as a part-owner, knew that. (For comparison, the new court filing shows that another nonprofit paid just $5,000 to use part of the Trump Hotel ballroom for part of one of the days the Inaugural Committee had rented it, which matched the internal guidelines.)

At this point, Stephanie Winston Wolkoff, an event planner and personal friend of Melania Trump who managed much of the inaugural planning, warned Ivanka Trump and Gates that when all was said and done, there would be scrutiny of their decision here—audits on what locations were used and how much was paid to use them would be made public. “I understand that compared to the original pricing this is great but we should look at the whole context,” Winston Wolkoff wrote, adding that she thought $85,000 a day was the most she considered to be reasonable.

Winston Wolkoff’s concerns were ignored. The Presidential Inaugural Committee ended up paying the Trump Hotel $1 million for four days use of the hotel’s ballroom.

They probably should have heeded Winston Wolkoff’s warnings. The lawsuit bringing these records to light was filed by Karl Racine, the attorney general of Washington, DC, against the Inaugural Committee and the Trump Organization. Racine is arguing that the district has the right to seek the repayment of funds because nonprofits operating in Washington, DC, which the Inaugural Committee did, may not work to create profits for a private organization or individual. According to Racine, the Inaugural Committee “coordinated with the Trump family to grossly overpay for event space in the Trump International Hotel.” The attorney general is asking that the money be returned and given to charities that promote civic engagement. (Racine is also separately involved with one of the emoluments lawsuits against the president regarding the Trump Old Post Office hotel, brought by the District of Columbia and the state of Maryland.)

If the new lawsuit, which was filed this week, goes forward, it could release a further avalanche of details on how the most lavishly funded inaugural celebration frittered away tens of millions of dollars—and more details about how involved the Trump family itself was in the decision-making.

Unsurprisingly, representatives of the inaugural committee issued a statement to the Washington Post insisting that there was no misconduct.

Racine’s lawsuit also highlights how negotiations between the inaugural committee and the hotel happened specifically in the context of profits for the hotel. In early January 2017, when the committee was considering pulling out of at least one event at the hotel, the hotel’s manager emailed Gates highlighting his concerns: “Just heard that the Friday night reception had been canceled. Is it accurate? Tough on us if it is as it was a lot of revenue for 1,250 people,” Mickael Damelincourt wrote. Gates continued the negotiation.

Stephanie Winston Wolkoff, an event planner and personal friend of Melania Trump, warned Ivanka Trump and Rick Gates that when all was said and done, there would be scrutiny of their decision here. Her concerns were ignored.

Racine’s supporting documents also offer a sense of the (sometimes comical) internal decisions being made for the most expensive inaugural celebration ever, which featured sparse crowds and far fewer events than normal. (Lists of tasks for inaugural committee staff are included in the suit because of the explicit references in them to the negotiations over use of the hotel space.) For instance, there are repeated mentions of Trump’s desire to arrive at a celebration on the mall in a military helicopter, flanked by members of the military. This idea was apparently nixed because at the time of the celebrations, Trump was not yet commander in chief. The documents also describe the president-elect’s hopes for military helicopters and tanks to flank the stage at the outdoor celebration. Another note describes how Donald and Ivanka Trump jointly decided that the Beach Boys would not be performing. At one point, a to-do list item includes asking Melania Trump about a family-and-friends tea reception at the White House, followed by a note from an inaugural committee staffer, “There should be NO reception.” Later, a more adamant note appeared: “Confirmed that NO tea will be hosted at WH and must be removed from schedule.”

Still, some of the most damning material revealed here has nothing to do with the Trump family and their over-the-top plans for the celebration. The documents repeatedly mention that inaugural committee staff should consult with Steve Wynn, the billionaire owner of Wynn Resorts who is a longtime GOP donor and personal friend of Donald Trump. The suggestions are highly specific—Wynn directing that the song “40 Hours a Week” by the band Alabama be played at an inaugural event. In 2018, Wynn was accused of sexual misconduct, which led him to step down as CEO of his casino company and as a finance chair for the Republican National Committee.

Correction: An earlier version of this story misidentified Steve Wynn’s role as former finance chair of the Republican National Committee.