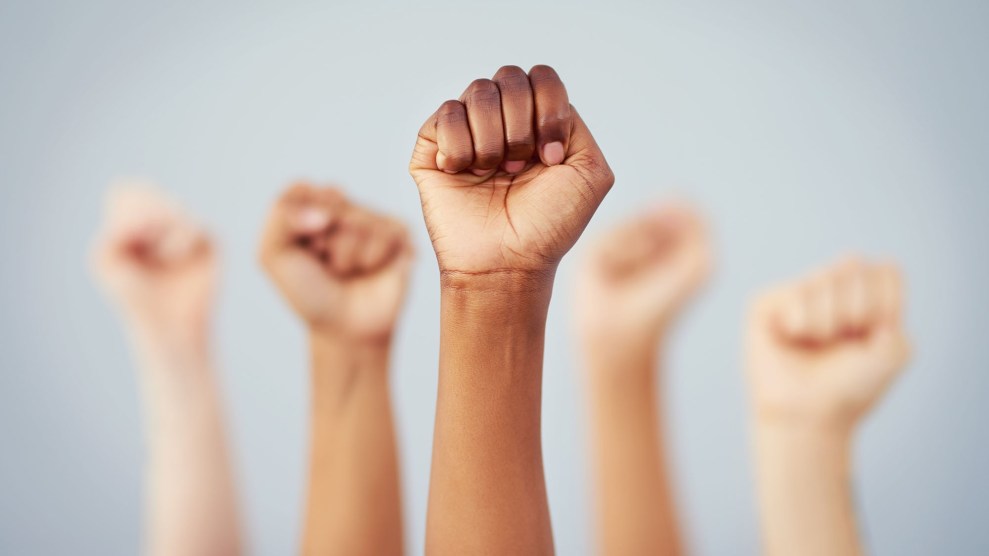 While miracles are not the stuff we should have to rely upon for our legal rights to remain in place, by some tiny, blessed miracle, Roe is still the law of the land. Even so, a post-Roe future feels alarmingly close. In fact, as we at Mother Jones have written before, in many ways that future is already here. And despite the power of the imagery, the end of legal abortion would not mean a return to back alleys and coat hangers, but pills and women taking their reproductive lives into their own hands.

“As long as there has been pregnancy, there has been self-managed abortion,” says Jill Adams, executive director of If/When/How, a legal reproductive justice nonprofit. “The trend that we’re seeing now, with more and more people in the US ending their own pregnancies, is really just sort of a returning of agency and power from the medical industry back to the people. ”

“With more and more people in the US ending their own pregnancies, is really just sort of a returning of agency and power from the medical industry back to the people. “

This predominately happens through medication abortion. Misoprostol is a drug commonly used for ulcers and to treat some pets and livestock; it’s fairly cheap and accessible and can be used alone to induce abortion. Adams notes how it’s been commonly used “in many areas of the global South for decades”: “In fact, women in Brazil, where abortion was completely criminalized, read the contraindications on an ulcer drug, misoprostol, which said do not consume if pregnant, could cause miscarriage and they went, Aha!”

The drug that it is usually paired with for in-clinic abortions, mifepristone, is regulated by the Food and Drug Administration as a high-risk drug (despite its extraordinarily high safety profile). Still, the drug combination has become more accessible online, via a flourishing black market.

While Adams notes that studies show ordering medication for abortion online has largely proven safe, she emphasizes it’s not without legal risk. In fact, from the state level on up, prosecutors are getting increasingly creative in how to criminalize the practice. “That’s the real tragedy of self-managed abortion in the US in 2020 is that people could be unjustly arrested, interrogated, prosecuted, even imprisoned for ending their own pregnancy or for helping a loved one do so,” she says.

“We know of at least 21 people throughout the US who have been arrested, some even put in jail, for ending their own pregnancy or helping someone else end a pregnancy since 2005,” she notes—though this number is just the “very very tip of a huge iceberg” as it does not account for dropped charges or plea bargains. What’s more, the typical prosecutor or district attorney isn’t tracking arrests in connection with trends in either self-managing abortion or assisting someone with ending a pregnancy.

There are only five states in which self-managed abortion is actually illegal, but “overzealous prosecutors are just treating the Criminal Code like a grab bag—even the Civil Code like a grab bag!—and pulling out whatever they can that might possibly stick,” Adams says. Ten states have fetal harm laws that lack an exemption for the person carrying the fetus, and she notes sometimes these laws can be used to charge people who have self-managed their abortion. “Sometimes those laws have been manipulated by law enforcement to apply to the pregnant person themselves, switching from the pregnant person being the victim to being the perpetrator.”

But the charges run across a full spectrum possibilities: practicing pharmacy without a license, drug-related charges, child abuse-related charges, concealment of a birth, failure to report a death, or even abuse of a corpse. She advises women to reach out to the If/When/How repro helpline for legal help or questions regarding laws in their state.

“That’s the real tragedy of self-managed abortion in the US in 2020 is that people could be unjustly arrested, interrogated, prosecuted, even imprisoned for ending their own pregnancy or for helping a loved one do so.”

Referring to the recent spate of abortion bans that made headlines last spring, Adams cautions that though these bans are not in effect, they do cause confusion about where abortion is and is not legal, and such legislation even “foments this antipathy toward people who perform abortions, and also toward people who have abortions.”

“That stigma provides this sort of fuel that increases the likelihood that someone will be criminalized for having an abortion,” Adams adds.

So if the future of abortion care is self-managed in the form of medication abortion, our worry should be that this will almost certainly become a burgeoning area of anti-abortion law. Until then, let’s count our miracles.