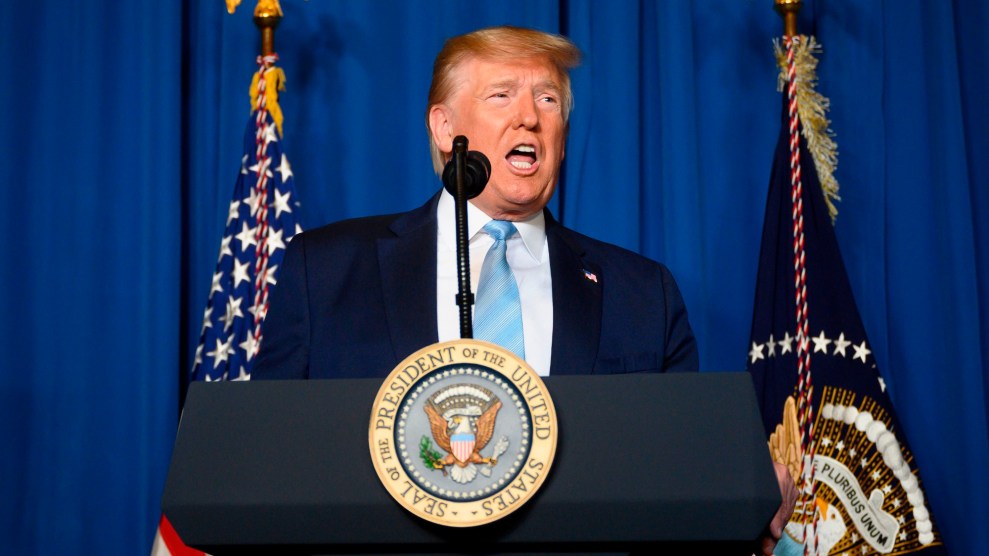 Ever since the US drone strike that killed Maj. Gen. Qassem Soleimani, a top Iranian general, the Trump administration hasn’t been able to provide consistent, or even coherent, answers about the assassination. Why did President Donald Trump decide to kill Soleimani? Was there really an “imminent” threat from Iran? Will this lead to war?

For the time being, it appears that tensions between the United States and Iran are cooling off, but the aftermath of the strike that killed Soleimani—and Iran’s retaliatory strike on two US military bases in western Iraq—has shown the lengths to which the administration is willing to go to justify its actions. Since Soleimani was killed, Mother Jones has been keeping tabs on the misleading information and outright lies that Trump and members of his administration have peddled.

Here are the three most egregious ones:

Soleimani was behind an “imminent threat” on four US embassies

Shortly after Soleimani’s death—on January 3 in Iran and January 2 in the United States—several Trump administration officials claimed that he was killed to prevent a future attack or series of attacks. Secretary of State Mike Pompeo told CNN the Iranian general was “actively plotting” to “take big action, as he described it, that would have put hundreds of lives at risk.” Pompeo, who led the CIA before taking over at the State Department, said intelligence reports informed Trump’s ultimate decision. “The risk of doing nothing was enormous,” he said. “Intelligence community made that assessment and President Trump acted decisively last night.”

Trump’s first extended remarks about the killing reflected that same narrative. “Soleimani,” he wrote on Twitter, “has killed or badly wounded thousands of Americans over an extended period of time, and was plotting to kill many more.” The Pentagon vaguely hinted at some targets of this imminent attack but provided few further details. “General Soleimani was actively developing plans to attack American diplomats and service members in Iraq and throughout the region,” read a January 2 statement defending the strike. “This strike was aimed at deterring future Iranian attack plans.”

Despite the talk of an impending attack, administration officials neglected to provide any firm evidence to Congress or the public. A classified briefing on Capitol Hill produced information “no more detailed or revealing than what we’ve read in the news or seen on the TV,” one senior House Democrat told Vox. “Instead,” another Democratic lawmaker said, “we got a historical overview of decades-long malign activities from Iran.” But as the debate raged among lawmakers and journalists about the legality of Trump’s attack—in particular, whether it merited being called an “assassination”—Trump offered more unverified details of Soleimani’s alleged plot. On January 10, he told Fox News that Soleimani was targeting four US embassies, including the one in Baghdad, which is the largest and most expensive diplomatic compound in the world. At a White House briefing that same day, Pompeo said, “We had specific information on an imminent threat, and those threats included attacks on US embassies.”

Secretary of Defense Mark Esper, tasked with defending the president on CBS’s “Face the Nation” days later, couldn’t even make sense of Trump’s “four embassies” claim. “What the president said was he believed there probably and could’ve been attacks against additional embassies,” Esper said, noticeably failing to confirm that any actual intelligence pointed to four embassies being under threat. When pressed by host Margaret Brennan on whether specific evidence pointed to Trump’s claim, Esper said, “I didn’t see one with regard to four embassies.”

After days of obfuscating answers, one bombshell report put the dagger through Trump’s weak justification for Soleimani’s death. On January 13, NBC News reported that the Iranian general had been in the Pentagon’s sights for eight months. Pompeo, as CIA director, had pushed for Trump to kill Soleimani as far back as 2017, but a strike against one of Iran’s most senior leaders was seen as too risky at the time. Trump finally agreed in June to strike Soleimani “if Iran’s increased aggression resulted in the death of an American.” When an Iran-backed militia fired rockets at a military base in Iraq, killing American contractor Nawres Hamid, Trump had the opening he needed and ordered the strike against Soleimani. But the Iranian general was evidently not Trump’s only target. On the same day of Soleimani’s death, US forces unsuccessfully tried to kill Abdul Reza Shahlai, a high-ranking member of the Islamic Revolutionary Guard Corps. If Soleimani were truly the mastermind of some impending attack, it wouldn’t make sense for the US military to also kill another Iranian leader. The attempt on Shahlai’s life suggests the true aims of the strikes were not limited to deterrence.

Not even Trump seemed willing to keep this fiction alive after a while. On January 13, he tweeted that it “doesn’t really matter” whether Soleimani was plotting an imminent threat. While recounting the lead-up to Soleimani’s death during a private fundraiser later that week, he never even mentioned an imminent threat. Instead, Trump seemed more concerned with the way Soleimani spoke about the United States. “He was saying bad things about our country, like we’re going to attack, we’re going to kill your people. I said, ‘listen, how much of this shit do we have to listen to, right?'” Trump told donors, according to the Washington Post.

Soleimani was involved in the 9/11 terrorist attacks

While various administration officials peddled misinformation related to the “imminent threat,” Vice President Mike Pence reached into the past for this next bizarre claim. In a series of tweets on January 3—one day after the strike—Pence asserted that Soleimani “assisted in the clandestine travel to Afghanistan of 10 of the 12 terrorists who carried out the September 11 terrorist attacks in the United States.”

This, of course, is unequivocally false. For starters, there were 19 hijackers on 9/11, not 12. (Katie Waldman, Pence’s press secretary, quickly took to Twitter to clarify that the vice president meant that “12 of the 19 transited through Afghanistan” and that “10 of those 12 were assisted by Soleimani.”) But there’s also no evidence to support Pence’s claim that Soleimani had any involvement with the 9/11 hijackers, who were al-Qaeda operatives and mostly from Saudi Arabia. According to the 9/11 Commission report, while Iranian officials did allow al-Qaeda operatives to travel through Iran’s borders to Afghanistan without the proper visas or passport stamps, there was no mention of Soleimani’s name anywhere in the report. The report concluded that there was no evidence that Iran “was aware of the planning for what later would become the 9/11 attack” or that the hijackers even knew what their mission was when they were traveling through Iran.

So there is no way that Soleimani knew about the 9/11 attacks beforehand and assisted the hijackers’ travel through Iran to carry out their mission, as Pence’s tweet implied.

Four days after Soleimani’s death, Iran fired 12 ballistic missiles at two US military bases in Iraq, bringing the United States and Iran a step closer to the outbreak of war. Early reports on January 7 were littered with incomplete information. CNN reported that “there are casualties” among the Iraqis stationed at one of the bases; three hours later, the network said there actually “are no casualties among Iraqi security forces.”

At a press conference the following morning, Trump struck an upbeat tone, “No Americans were harmed in last night’s attack by the Iranian regime,” he said. “We suffered no casualties. All of our soldiers are safe, and only minimal damage was sustained at our military bases.” Trump’s remarks made it seem like US troops had been kept far out of harm’s way, thanks to “an early warning system” and the “dispersal of forces.”

But that narrative quickly fell apart. On January 13, military officials at Ain al-Asad air base in western Iraq told the Washington Post that “several dozen” US service members had been treated for concussions as a result of the strikes. The attacks stretched on for more than an hour and a half, sources told the Post, leaving “deep craters and the crumpled wreckage of living quarters.” Contrary to Trump’s sunny assessment of a prepared US response, the newspaper concluded that “the lack of serious casualties was at least partly due to luck.” A CNN report the next day offered more details. Soldiers were warned about the attack hours before it happened, but the base “lacked the surface-to-air defenses to fend off a ballistic missile assault,” leaving the troops stationed there “at the mercy of the downpour of missiles.” One staff sergeant told CNN, “I was 100 percent ready to die.”

On Friday, the Pentagon finally walked back Trump’s initial statement entirely. The Wall Street Journal reported that 11 soldiers were being treated for concussion symptoms from the blast. “As a standard procedure, all personnel in the vicinity of a blast are screened for traumatic brain injury, and if deemed appropriate, are transported to a higher level of care,” a US Central Command spokesperson told the paper.