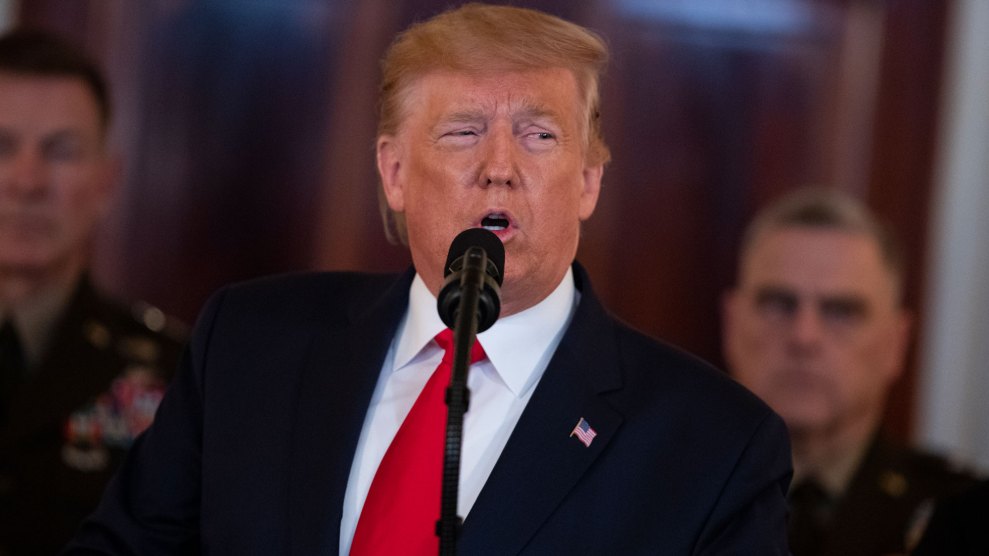 In the weeks after President Donald Trump authorized the killing of Iran’s top military official, Maj. Gen. Qasem Soleimani, administration officials tried to justify its actions in confusing and contradictory ways. When he first announced the assassination, Trump claimed it was to “stop a war.” In his latest version of events, which he shared with Republican donors at his Mar-a-Lago compound on the evening of January 17, Trump reportedly said Soleimani had been a “noted terrorist” who was “on our list” and was “saying bad things about our country,” according to an audio recording obtained by CNN and the Washington Post.

The US drone strike earlier this month escalated longstanding tensions with Iran and fears of a new war in the Middle East. Trump warned that if Iran retaliated against the drone strike, the United States would bomb the country’s cultural sites—a maneuver that’s long been considered a war crime. On Jan. 8, Iran’s revolutionary guard fired missiles at military outposts housing US personnel in Iraq. Though Trump initially said that no one was harmed, it turned out that 11 men had been injured, including eight Americans.

The audio obtained by CNN and the Washington Post reveals Trump’s view of the final moments of the strike that killed “two for the price of one”—Soleimani and Iraqi military leader Abu Mahdi al-Muhandis, who Trump wrongly described as the “head of Hezbollah.”

He went on to recount listening to military officials as they watched the strike from “cameras that are miles in the sky.”

“I said, where is this guy?” Trump continued. “That was the last I heard from him.”

The Washington Post reported that Trump crudely described Soleimani as “the father of the road side bomb” who was responsible for “every young, beautiful man or woman who see walking around with no legs, no arms.”

Notably absent from Trump’s Mar-a-Lago speech was the rationale he and administration officials had previously used in the days after the killing: that Soleimani posed an “imminent threat” against the United States.