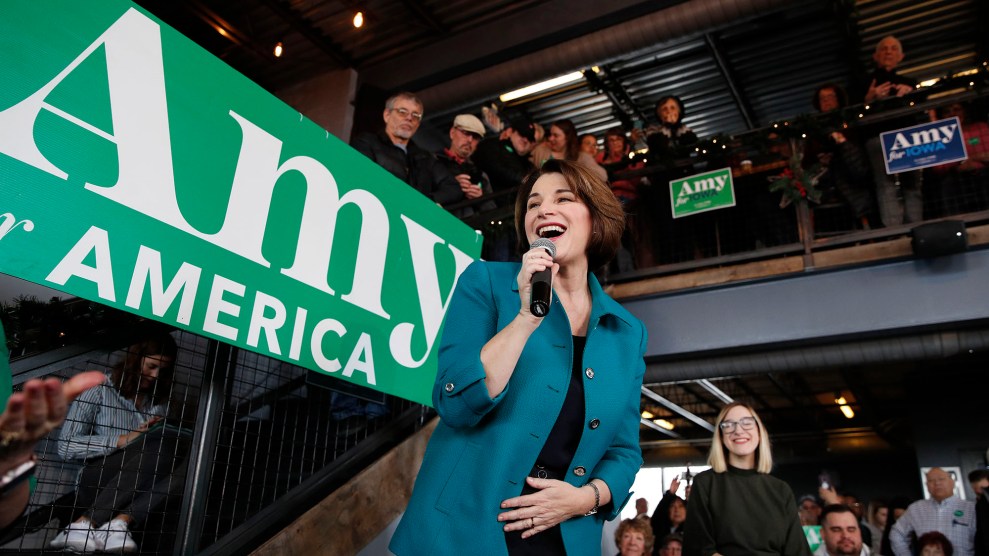 As he waited for Joe Biden to speak in Sioux City earlier this week, Virgil Nice of Sergeant Bluff told me he had earned his support at Monday’s caucus, but hoped that when it comes time for the former vice president to pick a running mate, he’d put a woman on the ticket. “If this gets back to him,” Nice told me, “I’d like him to pick either Kamala or the Minnesota gal.” The Minnesota Gal, of course, being that state’s senior senator, Amy Klobuchar.

Klobuchar might be the biggest wild card in Iowa right now. Written off after her campaign seemed to flounder for much of the summer, she stuck around after many of her Senate colleagues dropped out, positioned herself as a moderate alternative for voters who believe the party needs a new face in November, and now finds herself in the thick of it—at least in Iowa. One poll of the race this week put her in third place, ahead of Pete Buttigieg and Elizabeth Warren, and just one point shy of Biden. But as Klobuchar makes her closing push across Iowa, she faces a problem familiar to women candidates: many voters seem to want to elect her to an office different from the one she’s seeking.

“I’d like him to pick either Kamala or the Minnesota gal.”

Waiting to get into a gymnasium in Cedar Rapids on Saturday, I met Linda Krewson, a retiree who told me she was supporting Biden because he exuded “likability.” “You just want go up and hug him,” she said, acknowledging that such behavior on his part had gotten him in trouble. When I asked about Klobuchar, she leaned in and in a half whisper said, “I think they’d make a good pair.” Klobuchar—Midwestern, practical, and “young but not too young”—would, in her view, perfectly complete the ticket.

Pat Hammerstrom of Sioux City told me Klobuchar was running second behind Behind for her vote, but added: “I hope he will take a woman as vice president—I think any of the women they have running are perfectly qualified.”

Another voter I met in Council Bluffs offered two names: Warren or “that woman down in Georgia,” referring to former gubernatorial candidate Stacey Abrams.

This was a recurring pattern in conversations with voters this week, and in my previous visit this fall. With male candidates starting to cluster at the top of both Iowa and national polls, the largest field of female presidential candidates in history looks like it is on the verge of becoming the largest field of female vice presidential candidates in history. It’s not the rudest of sentiments. The days of the vice presidency as a “bucket of warm piss” are over, and Biden has already signaled that his running mate would use the job, like he has, as a stepping stone to the Oval Office. (He’s also suggested that Harris has his eye.) But Klobuchar is running for president now.

There are, of course, plenty of Iowans who think Klobuchar’s rightful place is at the top of the ticket. I met a bunch of them on Saturday morning in Bettendorf, where a few hundred filled a brewery and adjacent bicycle shop. Supporters donned t-shirts touting her record of electoral accomplishments and “Heartland” roots, as volunteers handed out green stickers—a nod, the senator explained, to her home state political idol, Sen. Paul Wellstone. A few hardy (is that the word?) souls availed themselves of the establishment’s diverse range of micro-brews, notwithstanding the fact that it was not yet 10 a.m.

Margie Schwaninger, sitting in the back with two friends, considered herself a Klobuchar fan even before she announced her candidacy. “I loved the way she interviewed Kavanaugh,” she said. “That was just outstanding. And I watched her in the debates and was impressed. She’s feisty.” The word I heard most often was “moderate.” Voters believe she can win, and they can trust her not to burn the house down once she does—they have enough problems to deal with right now.

And who knows. If Klobuchar can pull off an upset in Iowa, perhaps the idea of her getting to pick her own running mate won’t be so far-fetched. I hear there’s a man from Delaware who might make a good one.