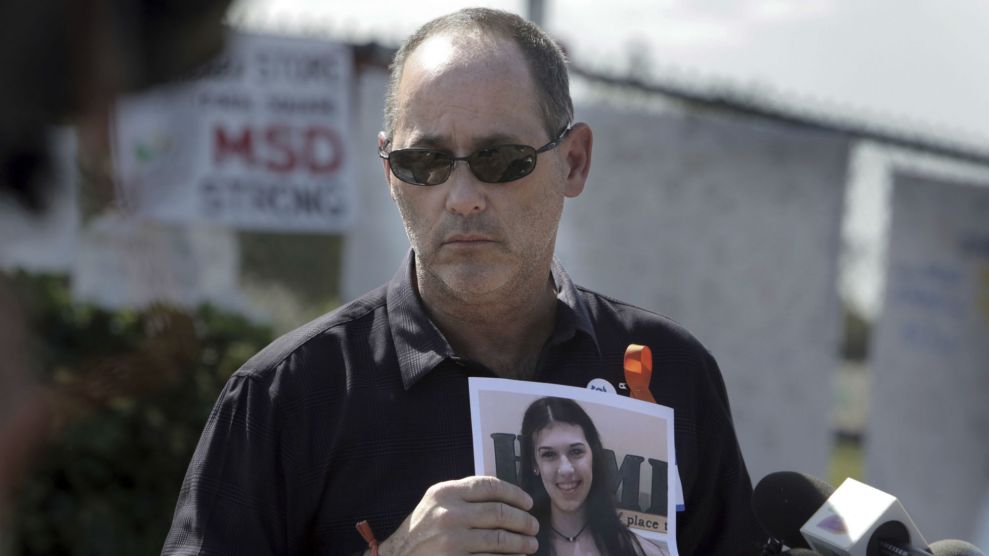 Fred Guttenberg with a photo of his 14-year-old daughter, Jaime, shortly after she was killed in the 2018 massacre in Parkland, Florida.Jose A. Iglesias/Miami Herald/AP

As Trump claimed that the Second Amendment was “under siege” in his state of the union address Tuesday night, he was interrupted by a father from Parkland, Florida.

Thank you @SpeakerPelosi for inviting me to be your guest tonight at the State Of The Union. I cannot thank you enough for your commitment to issues important to Americans and to the issue most important to me on dealing with gun violence.

Fred Guttenberg, whose 14-year-old daughter, Jaime, was killed in the 2018 massacre at Marjory Stoneman Douglas High School, tweeted before the speech that he was attending as a guest of House Speaker Nancy Pelosi. He shouted out about “victims of gun violence like my daughter,” according to HuffPost’s Matt Fuller. Security escorted Guttenberg out of the House chamber.

A man shouts from the gallery about "victims of gun violence like my daughter."

He shouted it while Republicans were applauding, so most people didn't really hear it, but Capitol Police have removed the man from the chamber.

.@fred_guttenberg lost his daughter in the Parkland shooting and has worked every day since to end gun violence.

Tonight he stood up to a president that believes peace and the second amendment are mutually exclusive and was removed.#ImWithFred pic.twitter.com/RprctMp2iE

Trump mentioned gun violence in his speech only in an attempt to gin up fear against undocumented immigrants and sanctuary laws. His speech used the phrase “criminal alien” five times.

“If you’re on the wrong side of this issue, I’m going to work with every ounce of my fiber to fire you. That’s the bottom line. You don’t deserve to serve.”