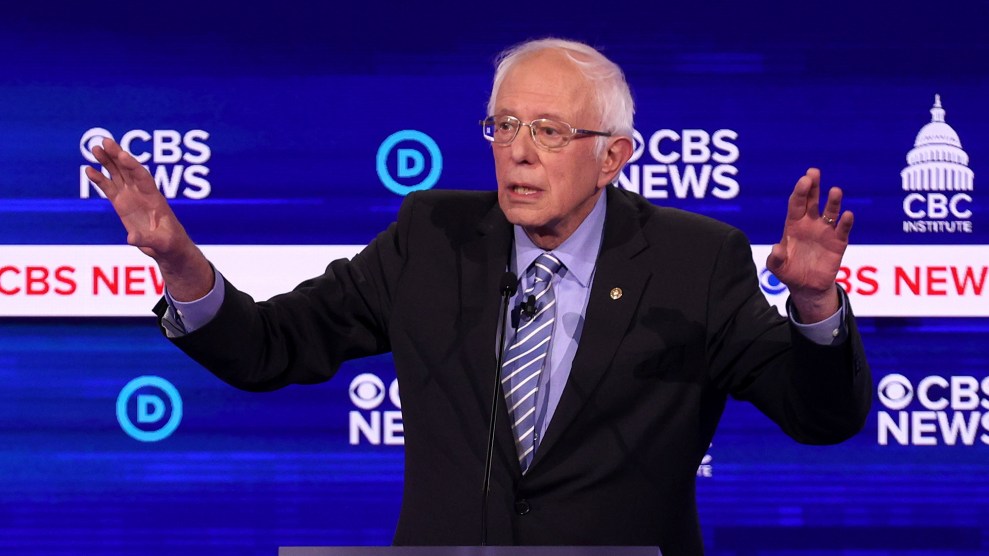 Vermont Senator Bernie Sanders has fought his way to the front of the Democratic race for president by promising bold changes that would profoundly reshape the country. But he’s been cool to at least one fundamental reform long pushed by other Democrats: eliminating the filibuster.

After progressives have watched their priorities, including a swath of legislation pushed in the Obama administration, fail in the Senate at the hands of its arcane and anti-majoritarian 60-vote threshold for passing legislation, many voters and some of his opponents have scratched their heads at Sanders’ reticence. In South Carolina, Sen. Elizabeth Warren and Pete Buttigieg have challenged Sanders on the issue, including on Tuesday night’s debate stage.

To admit that the filibuster needs to go acknowledges the limits of Sanders’ revolution.

“The filibuster is giving a veto to the gun industry,” Warren said at the event. “It gives a veto to the oil industry. It’s going to give a veto on immigration.” She continued, referring to Sanders, that “many people on this stage do not support rolling back the filibuster. Until we’re ready to do that, we can’t have real change.”

Buttigieg piled on, making an incisive point about how the filibuster has been used as a tool to extend minority control: “How are we going to support a revolution if you won’t even support a rule change?” he said. “We are in the state where Strom Thurmond used the filibuster to block civil rights legislation repeatedly.”

Sanders, facing attacks on multiple fronts in a chaotic and messy debate, didn’t answer these critiques. But afterwards, Mother Jones asked his longtime adviser, Jeff Weaver, to explain the frontrunner’s position. Weaver tried to brush off the entire discussion, as a Senate parliamentarian might say, as not germane to the presidential election. “Last time I knew, the president had no control over who controlled the filibuster. That’s controlled by the leadership of the United States Senate,” he said. Instead of “having an academic argument about the filibuster when the Senate is going to decide that, in a presidential campaign let’s talk about the things the president is going to do.”

Sanders’ campaign touts his ability to deliver a political revolution, one where a wave of young voters and disaffected citizens sweep him into the White House with the momentum and energy to push major reforms like universal healthcare and a Green New Deal through a reticent Congress and onto Sanders’ Oval Office desk. To admit that the filibuster needs to go in order to do so acknowledges the limits of this premise. But voters who are doubtful about the power of his promised revolution want to hear how he plans to enact major reforms when Obama, who came to office with Democratic majorities in both houses of Congress, was quickly bogged down in negotiations and only managed to pass a watered-down version of his health care law through Congress by the barest margins.

On Monday, a 69-year-old voter named Maurice told me while attending a Buttigieg event in North Charleston that he was interested in learning how the candidates would “take control of Congress” to pass legislation. “I know about his type of politics,” he said of Sanders, but Maurice, who didn’t want his last name used, said he worried that the senator didn’t seem to have a plan for getting past Congress’ roadblocks.

“This would represent a tremendous escalation.”

Despite brushing off the question of ending the filibuster, Sanders has acknowledged that it could be an obstacle to passing his agenda by offering a route around it—though its one that few voters have heard, and perhaps even fewer would understand. While Weaver expressed a degree of deference to the body’s autonomy from the executive branch, saying “they are separate bodies and the Senate is very protective of its prerogatives,” he outlined a plan that would constitute in many ways a more radical hijacking of the upper chamber.

Over the past year, Sanders has indicated that Medicare-for-All and other major reforms could be passed through a process known as budget reconciliation, which allows senators to approve legislation with a simple majority. But budget reconciliation, a process created by the Congressional Budget Act of 1974 to smooth out wrinkles in Congress’ appropriations process, has serious limitations. Though it has been used to pass major legislation, including key reforms to Obama’s Affordable Care Act, under current rules the Senate parliamentarian is charged with advising the presiding officer of the Senate—that is, the vice president—if a bill meets the qualifications for this special process.

Sanders’ plan is to simply have his vice president ignore contrary advice from the Senate parliamentarian and allow passage of any bill with 50 or more votes. “A lot of legislation has been passed under budget reconciliation rules and I think that will come into play here again,” Weaver said. “He has said the 60 vote threshold will not be a barrier with his vice president sitting in the chair.”

While the solution might technically mean that the president wouldn’t have to push for any changes to Senate rules, it would constitute the executive branch directly overruling the parliamentarian’s rulings which are the outcome of those rules, turning governing into a process of navigating hard-to-understand rules and then having an administration ignore their result. “This would represent a tremendous escalation of partisanship in the Senate, and of presidential control over the Senate,” Gregory Koger, a political scientist at the University of Miami, told Vox last year.

For a candidate who has called for reimposing the separation of powers on an executive branch that, particularly under Donald Trump, has pushed to exercise those powers in unprecedented ways, Sanders’ proposal seems to run contrary to such rhetoric. It remains one that his opponents continue to press him on—and that voters do not fully understand.