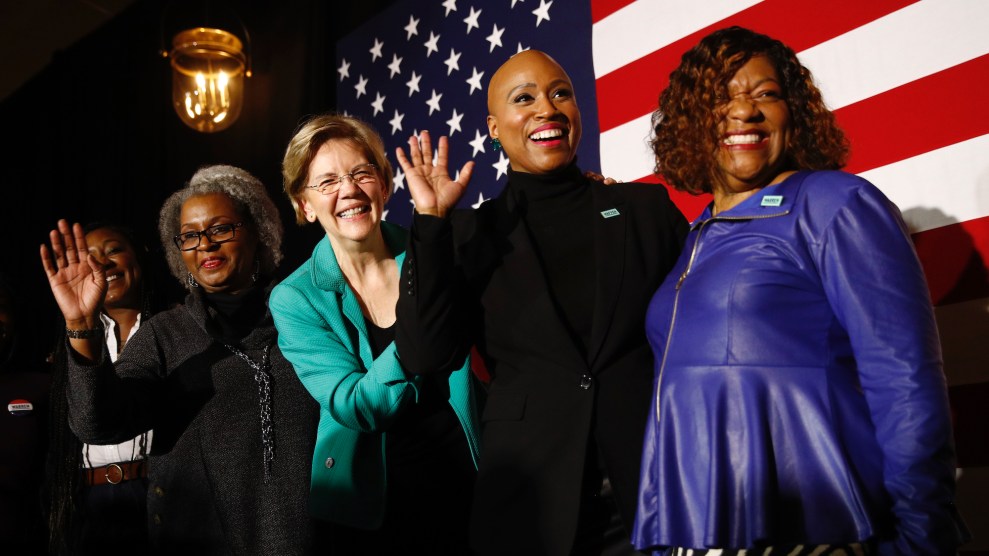 When Black Lives Matter co-founder Alicia Garza took to the stage at Monday’s “Women for Warren” event in downtown Charleston, South Carolina, she described Elizabeth Warren as a partner in her fight for racial equality. The Massachusetts senator, Garza said, not only understands how “race and gender shape the rules,” but also “has a plan to work with us to remake the rules.”

“I need somebody to get it when I say I’m making 68 cents [for every dollar] the guy next to me is making,” Garza told the 500-person crowd packed into a loft space of an old cotton factory. “I need someone to understand that as a Black woman, I care about more than criminal justice reform.”

The comment could have been aimed at Bernie Sanders, the Democrats’ current frontrunner, who has put criminal justice reform at the core of his appeal to South Carolina Democrats, two-thirds of whom are Black. Last Friday, the Sanders campaign began running an ad, titled “Justice,” in the state, promising to address bail reform and focusing on the fact that “one out of three Black men” are serving prison sentences. Ahead of Tuesday’s debate, the campaign released a video featuring rapper and Sanders’ surrogate Killer Mike that heavily features images from the killing of Eric Garner, a Black man who had been choked to death by a New York City police officer.

I asked Garza whether that remark had been intended as a swipe against Sanders. She smiled but wouldn’t say. “We’re not one-dimensional beings—Black people care about a lot of different things,” Garza said. “And so often, when you get people on these debate stages, they’re talking to us, but they’re really talking at us. And they’re only talking at us about criminal justice reform.”

Whoever Garza’s intended target was, the fact of the matter is this: In June, after having released a number of different plans, Elizabeth Warren rose to second place in South Carolina polls with one-fifth of the Black support, but in the latest polls from the state, she’s behind Sanders, former vice president Joe Biden, and billionaire Tom Steyer, both overall and with the state’s crucial Black voters. And for a campaign that was premised on removing the big, structural barriers to big structural change—particularly for those who have been most victimized by government policies—that’s bad news. In the lead-up to the first primary contest with a substantial Black population, the Warren campaign deployed high-profile African American women surrogates to remind voters of her commitment to addressing their priorities. And yet, it hasn’t made much of a difference.

Garza—along with her political organization, Black to the Future Action Fund—endorsed Warren last week. But in 2016, she and other Black Lives Matter movement leaders famously refused to back a candidate, opting instead to protest at Hillary Clinton’s and Bernie Sanders’ campaign stops for their unwillingness to connect the economic disadvantages the Black community faced to systemic racism. “Sometimes you have to put a wrench in the gears to get people to listen,” Garza said of their tactics in September 2015.

For Garza, Warren has listened. In Charleston, Garza told the crowd about the times Warren had called her before announcing her candidacy, asking for guidance on how to unite her vision of rewriting the rules of the economy with removing the “extra barriers” facing women and people of color. It’s a message Warren’s Black women surrogates, such as Rep. Ayanna Pressley (D-Mass.), have repeated throughout the campaign: Warren has prioritized personal outreach to Black women activists and has been responsive to questions she’s received about how her proposals affect Black Americans.

Pressley delivered this message to a nearly all-Black audience gathered at a Horry County Democrats event held in Conway, South Carolina, on a Sunday stop during her four-day swing through the Carolinas on Warren’s behalf. “The plans are about the people,” Pressley said from behind the pulpit of the Mason Temple Church Of God In Christ. Warren’s agenda, Pressley continued, “isn’t an agenda for Black America—it’s an agenda for America that includes Black people in every aspect, truly a racial justice lens.” She elicited some knowing nods and appreciative smiles.

When I asked Pressley about her pitch to voters before the South Carolina’s primary on Saturday, she told me she wanted to emphasize how Warren was a “genuine partner” to Black women. “People like to talk about her being an extraordinary professor, but she’s a better student of the people, truthfully,” Pressley said. “She remembers what [people have] shared, their lived experience, their story, their struggle, and their ideas, too. And then she responds with policies that prove she’s actively listening.”

When Elizabeth Warren entered the race last January, she arrived with a precise analysis of how decades of government decisions have skewered the economic wellbeing of Americans of color—and women of color in particular. Her very first plan described how it would be possible to provide universal childcare for every child under five, a proposal that would allow mothers of color—roughly half of whom report childcare as a barrier to higher wages—to find another job, as well as increase the pay of millions of women of color who overwhelmingly compose the childcare workforce. Warren followed up with housing plan aimed at undoing the legacy of banking discrimination that kept Black borrowers from buying homes, and a proposal to cancel student loan debt, which Black borrowers disproportionately carry. When Warren presented this package of reforms to women of color at the She the People presidential forum in Houston last April, she received a standing ovation and attendees declared her performance the most impressive of all the candidates. “We got a room full of people here who weren’t given anything,” Warren said as she concluded her remarks to the ecstatic crowd, “We’ve got a room full of people here who’ve had to fight for what they believe in.”

In November, Warren received Pressley’s endorsement, as well as the backing of Black Womxn For, a group of more than 100 non-male identifying Black activists. At a marquee event at Clark Atlanta University, Warren was flanked by Pressley and Black Womxn For director Angela Peoples. Warren called upon the accomplishments of the Washing Society—a union of Atlanta’s Black washerwomen who launched a massive strike in the 1880s—to draw a straight line between their struggle and the premise of her candidacy. “The lesson is clear: Racism doesn’t just tear apart Black and brown communities—it keeps all working people down,” she said. “Racism props up the wealthy and powerful, leaving them free to take more wealth and more power for themselves.”

This message didn’t translate into support in the Palmetto State. Her second place standing in June slipped in the fall, when a November Quinnipiac poll of South Carolina voters showed her in third place behind Sanders among Black voters. The downward trajectory has only continued: An NBC News/Marist poll conducted last week showed her at a distant fourth behind billionaire Tom Steyer.

Why didn’t Warren take hold? Some local Democratic leaders say Warren didn’t make enough stops in the state to build on the momentum of her She the People appearance nearly a year ago; others say she went about organizing the wrong way, favoring town halls over more intimate gatherings.

That was the criticism of Warren by Tameika Isaac Devine, a Columbia city councilwoman who had been the first Black elected to that body in 2002. But after her first-choice candidate, New Jersey senator Cory Booker, dropped out of the race in January, Devine gave Warren a second look. “A lot of her policies are a bit more progressive than what I personally was comfortable with,” Devine explained, and she raised concerns with Warren about her support for Medicare for All.

“One of the things I really loved about her is that she listened,” Devine told me, in a description that echoes Garza’s experience. Devine says Warren didn’t try to convince her of the merits of her proposal. “She wasn’t trying to convince me that her way was the right way,” Devine recalls. “She was like, ‘What’s your concern? And I’ll tell you how I think about some of those concerns.'” Devine recalls. In contrast, Devine said Sanders never personally tried to connect with her as the other candidates did.

As she reflected on her encounter with Warren, Devine said, “I love that approach because I feel like, to be an effective leader, you can’t feel that your way is the only way to accomplish something.” It’s an approach that has worked in many ways, except, it seems, in the most important one for the 2020 Democratic primary.