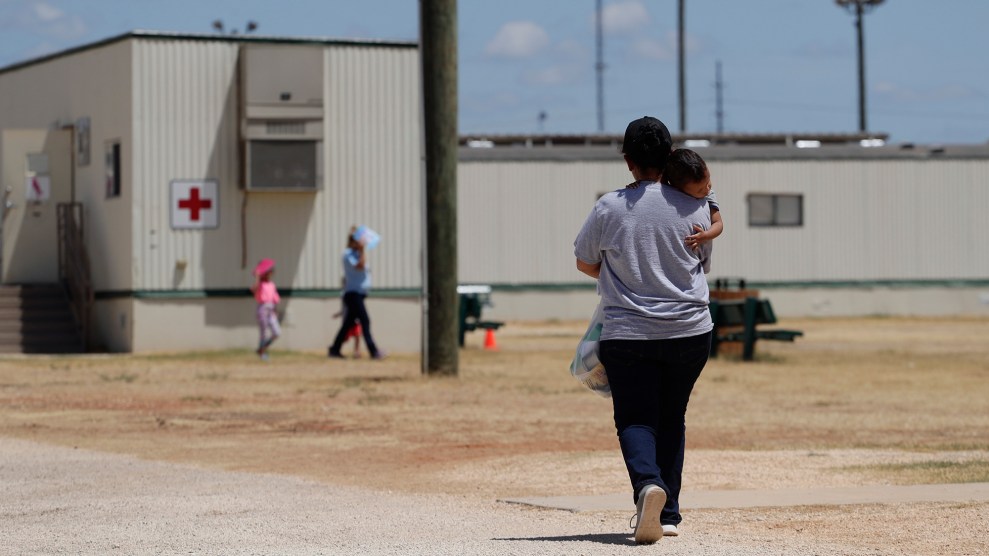 A five-year-old girl in a Pennsylvania immigration detention facility was rushed to a nearby hospital with pneumonia-like symptoms on Monday—only to be returned the facility that same day and put in isolation with her mother after being tested for COVID-19.

The girl, who had been detained for five weeks with her parents at the Berks Family Residential Center outside Philadelphia, had been sick for some time, according to Bridget Cambria, executive director of the legal aid group Aldea. In fact, the whole family hadn’t been feeling well, but when the girl started having difficulty breathing, Immigration and Customs Enforcement officers called an ambulance. When it came, Cambria said, they refused to allow her father to go with her.

The five-year-old and her mother then went to the hospital for several hours—during that time, she received a chest X-ray and a COVID-19 test—before being put back in an ambulance to head back to quarantine at Berks. According to Cambria, the father was not allowed to join them and spent the following days terrified, unable to see his family and trying to talk to them from outside the door to the medical isolation unit. Cambria said the girl’s father told her that his “heart won’t stop hurting because of the stress.” (Cambria asked to keep the family’s identity private for their safety.)

An ICE spokesperson confirmed the details of the hospital visit and said “a resident” was taken Monday to a nearby emergency room. The spokesperson said that after being treated and tested there, “the family unit was safely quarantined at the Berks Family Residential Center in accordance with CDC guidance.”

“They have no actual education of what this disease is, and they start to panic seeing it in the news.”

The young girl’s case is part of a lawsuit filed by three nonprofits that provide services to immigrant communities—Aldea, RAICES, and the Rapid Defense Network—on behalf of 37 families inside the three detention facilities where ICE holds families. The suit asks for the immediate release of those families as a result of the coronavirus pandemic. “They’re scared,” Cambria said. “They have no actual education of what this disease is, and they start to panic seeing it in the news.”

For weeks, lawyers and activists have demanded that ICE release adults from detention facilities before the virus spreads. So far, two immigrants have tested positive for COVID-19 in immigration detention centers in New Jersey; nationwide, five detention center employees have tested positive for the virus. Advocates fear that when the virus enters these facilities, it could infect hundreds or thousands confined to those spaces, which are essentially jails.

According to Cambria, the family at Berks has been especially worried over the past week. After the trip to the hospital, the girl’s parents weren’t updated on their daughter’s diagnosis, didn’t see any test results, and couldn’t even say with certainty that their daughter was indeed tested for COVID-19 at the hospital. With permission from the family, attorneys with Aldea tried to get medical information from ICE but were unsuccessful. The mother wasn’t allowed to keep any paperwork or medications that were given to her after her daughter was released from the hospital.

On Thursday, the mother and child were taken out of quarantine. Still, the family didn’t know what the result of the test. Then, on Friday afternoon, in the email response to my questions for this story, ICE officials said “the family unit Covid-19 test results are negative.” I informed Cambria once I received the email; she would be the first person to tell the family that the five-year-old wasn’t sick with COVID-19.

Cambria told me the families at Berks have complained that they don’t have access to enough sanitizer or cleaning supplies, echoing complaints at detention facilities for adults.

Like the nation’s two other family detention centers, Berks has been criticized for its unsafe and unsanitary conditions and for the lack of proper medical care there—all the more worrisome as the coronavirus continues to spread. Cambria told me the families at Berks have complained that they don’t have access to enough sanitizer or cleaning supplies, echoing complaints at detention facilities for adults; one Cuban asylum seeker told my colleague Noah Lanard last week that “if coronavirus gets in here…it’s going to be a massacre.”

ICE officials told me that Berks has “temporarily suspended new intakes” and “no residents or staff members are symptomatic.” The agency is “screening potential exposure among detainees” and continuing to follow CDC guidelines.

As of Friday, 39 people were held there, ICE said. That’s 14 families with children as young as six months old, Cambria said. She urged ICE to release the families who have already been isolated for weeks so they can shelter in place outside of immigration detention centers, for the safety of the families and the ICE employees going in and out every day.

“Children can’t social distance on their own. They’re going to put things in their mouth. They’re going to touch other children,” Cambria said. “It’s not like people can go to a different room to be by themselves.”