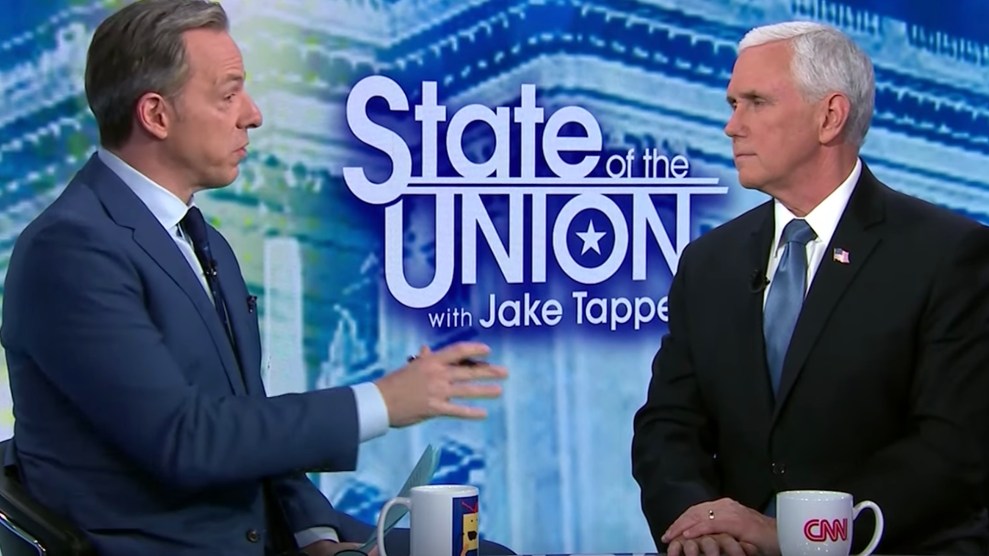 On Sunday, coronavirus task force head Vice President Mike Pence went out on the morning talk shows to promote the administration’s response to the epidemic. Instead of reassuring the country that everything was under control, he ended up having to defend the president’s son, Don Jr. It didn’t go well.

On Friday, Donald Trump Jr., had gone on “Fox and Friends” and told anchor Brian Kilmeade that the Democrats were rooting for the coronavirus epidemic to get worse in the hopes that it would have a negative impact on Trump’s popularity ratings. “Anything that they can use to try to hurt Trump, they will,” Trump Jr. said. “But for them to try to take a pandemic and seemingly hope that it comes here, and kills millions of people so that they could end Donald Trump’s streak of winning, is a new level of sickness. You know, I don’t know if this is coronavirus or Trump derangement syndrome, but these people are infected badly.”

When Pence appeared on CNN’s “State of the Union” Sunday, host Jake Tapper asked, “Can we agree that neither Democrats nor Republicans want Americans to get the Coronavirus and die from it?” Tapper asked. You don’t believe that the Democrats want people to contract the disease, do you?” Pence didn’t respond with a resounding “no.” Instead, he claimed that Don Jr.’s point was that “This is no time for politics,” only to then bash Democrats for attacking the president on the virus response. “There has been some very strong rhetoric directed at the president by some members of Congress,” Pence said.

Pence doubled down on his complaints about Democrats on NBC’s “Meet the Press.” After host Chuck Todd quoted right-wing radio host Rush Limbaugh of trying to “weaponize” the virus to “bring down Donald Trump,” Pence shot back, saying that “there’s been a lot of irresponsible rhetoric among Democrats and commentators on the left.” After Todd pressed the vice president to name specific Democrats who were intentionally fanning the flames, Pence pointed to a recent column by Gail Collins in the New York Times that suggested renaming the disease “the Trump virus.”

“When you see voices on our side pushing back on outrageous and irresponsible rhetoric on the other side,” Pence said, “I think that’s important, and I think it’s justified.”