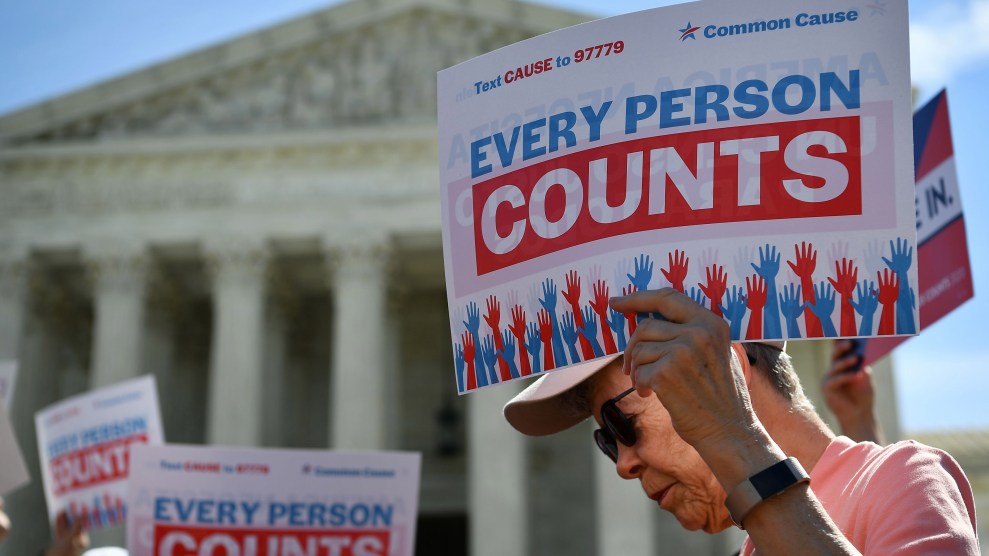 Counting every person in the United States is usually a social endeavor.

Grassroots organizers and civic leaders canvass their neighborhoods to encourage people to respond to the once-every-10-years census. A fleet of door-knockers, known as enumerators, hired by the Census Bureau visits the homes of people in hard-to-count communities. Other Census Bureau employees count people living on the streets or in homeless shelters in an undertaking that requires constant face-to-face interaction with vulnerable populations.

The entire operation, which determines the allotment of congressional seats, Electoral College votes, and about $1.5 trillion in federal funding for the next 10 years, has come under threat with the spread of the novel coronavirus.

The original plan for this year’s constitutionally mandated headcount went something like this: In mid-March, the Census Bureau sends mailers to people’s homes encouraging them to take the census online. (This is the first year the census has been offered digitally.) On March 30 and April 1, the Census Bureau works with community-based organizations to count people experiencing homelessness. On April 9, early nonresponse followup targets college students who are required to respond to the census at their school-year residences—where they live most of the time—before they move elsewhere for the summer. And, in mid-May, door-knocking begins in force to ensure that every person living in the United States is counted by the July 31 census deadline.

But that timeline, 10 years in the making, just happens to overlap with a pandemic that has affected every aspect of American society and whose end date is unknown. The Census Bureau is encouraging everyone to participate online if possible while scrambling internally to adjust its operations to protect public health amid execution of a public good.

On Wednesday, the Census Bureau announced that it would suspend field operations until April 1, amid the coronavirus outbreak. This will predominantly impact two efforts, according to the New York Times: outreach to 6.2 million households with unconventional addresses, including Native American reservations, and the national homelessness count. Counting each of these populations requires just the sort of in-person contact the Centers for Disease Control and Prevention are discouraging—and, as NPR points out, the volunteers that the Census Bureau tends to recruit are members of the group most at risk from the coronavirus: retirees over age 60.

“The census is how we invest in our communities’ health.”

In 2010, 72 percent of households responded to the census before April 27, leaving census takers to visit more than a quarter of residences. In New York City, the self-response rate was less than 62 percent.

The early nonresponse followup has been delayed from April 9 to April 23, but it’s unclear when the homelessness count will take place.

“The Bureau has the ability to shift operations in the wake of the crisis,” explains Beth Lynk, the director of the Census Counts campaign at the Leadership Conference on Civil and Human Rights. “We are monitoring that and educating communities when things are shifting, and making sure that folks have the information that they need to participate.”

That means, for example, telling college students who may have been sent home from campus that they should still report their address as their college dorm, the place they spend most of the year and where they would normally reside on April 1. The Census Bureau said in a press release earlier this week that it was asking schools to remind students to respond. Educating communities also means intensive outreach through phone calls and advertising to urge historically undercounted populations, including Black and Brown people, the LGBTQ community, and people who don’t speak English as a first language, to self-report the census.

“The reality is, we know that there is an undercount among particular communities every census, Lynk says, “and so we’re already fighting an uphill battle.”

Effective census outreach often means community engagement on a scale that simply can’t happen during a pandemic. In New York’s Jackson Heights neighborhood, for example, dozens of volunteers gathered in a public school cafeteria last week to plan how they would encourage their neighbors to participate. People crowded around blown-up maps of each neighborhood, identifying houses of worship, banks, and markets where they could set up Mobile Questionnaire Assistance booths to help people navigate the technology needed to respond to the census online. There were to be “Text Out the Count” parties on March 22 where groups of friends gathered to send the online census form to hundreds of thousands of New Yorkers using a peer-to-peer texting app. On April 18, the city had planned a Day of Action when New Yorkers would canvass their neighborhoods to get people counted and lighten the burden of the federal volunteers.

A week later, these plans have mostly fallen apart. “As a Mayoral Initiative, NYC Census 2020 will follow the directives and guidelines of the Department of Health and Mental Hygiene and the Center for Disease Control,” says Julie Menin, the NYC Census director. “This means we will not be holding any in-person gatherings or street canvassing. Our town halls, teach-ins, and phone- and text-banking will all be held remotely, through video conferencing whenever possible.”

Marc Morial, the president of the National Urban League and former mayor of New Orleans, worries that the current chaos could result in an undercount. “The hard-to-count, which in too many instances waits on the door-knocker, could be left out,” he says. “The door-knocker program is scheduled to begin in May. They’re doing hiring now, training now. All of that is going to be negatively affected by the pandemic and the states of emergency.”

Morial, along with several Democratic members of Congress, including Rep. Alexandria Ocasio-Cortez (D-N.Y.), has suggested that the Census Bureau take the unprecedented step of extending the deadline past July 31. “It’s not going to be fair to people, and fair to the hard-to-count, if they cut that program off after this period of time,” Morial says. “It’s not difficult for the census to extend the time period that people have to respond.”

But Lynk says that while the Census Bureau’s operations may shift the July 31 self-response and nonresponse followup deadline past July 31 to adapt to the pandemic, extending the statutory deadlines—December 1, 2020 for apportioning congressional seats and April 1, 2021 for redistricting data files—deadline would require an act of Congress. The Leadership Conference on Civil and Human Rights outlines a number of additional challenges to extending the July 31 census, beyond the difficulty of meeting the statutory deadlines: the farther from April 1 someone reports, the less accurate his or her recall is likely to be; major weather events like hurricanes, which could disrupt enumeration, tend to take place in the later months; data collection should be consistent across the country; and a delay might make it harder to count mobile populations like migrant farmworkers. The challenges, it seems, are endless.

Census advocates all agree on one thing: the safest, most accurate way for people to be counted is to self-report from their own homes. “We’re really doubling down on elevating the importance of the fact that everyone’s responding to the 2020 census on their own, online, by phone, or with the paper questionnaire,” Lynk says.

And in New York City, where 3,615 people have tested positive for the virus, and gatherings of more than 50 people have been banned, the message is the same. “The census is how we invest in our communities’ health. For example, census data determines allocations for funding for CHIP (low cost health insurance for children) and hospitals,” says Menin. “What’s more, it’s how we get the foundational data that public health experts use to plan for and manage situations like COVID-19.”

Correction: An earlier version of this story misstated which census deadlines would require an act of Congress to change. The December 31, 2020 and April 1, 2021 statutory deadlines, not the July 31, 2020 self-reporting deadline, would require congressional approval.